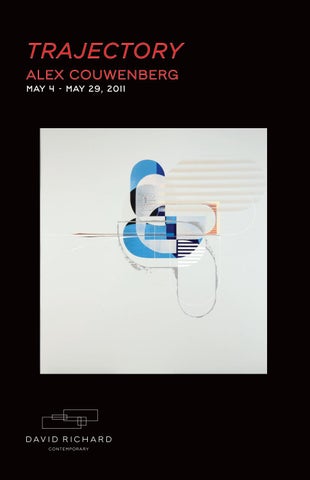 I like to see complexity resolved. There’s a certain beauty in an intricately plotted mystery, a Baroque fugue, a Roman floor mosaic, a Dickens novel, anything that seems at first to be scattered and random, too filled with separate thoughts and contradictory impulses ever to come together—and then they do, they take what seemed to be chaos and turn it into pattern, they bring what seemed to be arbitrary and make it appear inevitable. That’s part of what I respond to most about the work of Alex Couwenberg, how his is a highly personal art of retrieval and reconciliation, how he skirts the edge of dissolution and wreaks it into hard-won harmony, how he shuffles it—whatever “it” is-- relentlessly to and fro, weighing and adjusting, calibrating and interrupting, a quick swivel here, an unexpected torque there, a whisper of the stability of line tested by a sudden tonal shift--well, you better bring your lunch, there’s nothing quick and easy about this work, you’re going to have to do some serious looking. If you’re a musician or a writer or a dancer you can take your audience through these acts of reconciliation in time, time gives you the thread you can follow from beginning to middle to end. But a painter! Time is collapsed all within one surface, one rectangle, only the artist knows the layers embedded beneath the final painting,

remembers when everything seemed lost, the false steps and conundrums that needed to be rectified and solved, the pivotal moment where it began to come together, the rush of being when all the intricacies began to resolve themselves, that final sense when you were finished, that it was done. That’s how I imagine Alex Couwenberg works, that within his own idiom (and more on that in a bit) he does his version of the painter’s core archetypal thing: to do something on the surface

of a painting that requires him to do another thing that calls for something else that means he has to do this other thing and so forth until he’s locked in the taut embrace of picture-making that only ends when the damn thing is done. Take, for example, Peep Show. Notice how rarely Couwenberg centers his

imagery, it usually falls off somewhat to the right, as if it settles somewhere on the composition where a lot of toing and fro-ing had to happen. (This reminds me a bit of how a Scrabble board gets played, sometimes one quadrant gets all the action and another seems immobile, frozen, what begins in the very center ends up meandering away as the game progress-

es.) And while there may be a tendency to privilege Couwenberg’s painterly and linear incident in these works, one should never overlook the color he initially lays down on these canvases. In Peep Show it’s a deep dark gray, a kind of Jasper Johns gray, a gravitas gray that seems solemn and determined, not like the spry tans or cool blues or creamy light yellows or rich browns or even the pale grays or off-whites he’ll use elsewhere. Somehow this first color is the first gesture for Couwenberg, the causal gesture, it provides the context for what will ensue, somehow this graphite gray from which he can go darker or lighter will motivate the next gesture he will make.

Only Couwenberg knows what that next gesture was. It may not even be on the surface of Peep Show any longer, it’s probably not, that gesture itself perhaps effaced by his subsequent activities, the motival act buried beneath its many progeny. We’re left with the finished thing, the endgame, but only Couwenberg got to play it, there’s a process going on here but we don’t get to see it work itself out, we just get to see it resolved into a kind of hard won but inevitable perfection. But let me tell you how I go about looking at a painting by Alex Couwenberg. I stare at it for a while, and then try to find a fulcrum point in it, some smallish element somewhere that somehow seems the opening salvo to the whole composition, the little Rosetta Stone that decodes it, the spring lock, the tether, the string that you can pull on to unravel it all. In Peep Show for me it’s the little silhouette of 3/5 of a circle set within the orange field at the lower center part of the painting. I look at that thin circular line and suddenly everything starts to spin off it, sometimes logically, just as you would expect, but sometimes in riffs of such curious curvy inventiveness that it starts to careen about, into the vortex you go, up, down, left, right, solid, transparent, substance and schematic, flatness and texture, interpenetrating areas of positive and negative space that never seem to cease shuffling about. (OK, here are a few of my other tethers, in Lani it’s the little horizontal blue bar a bit to the right of the center, in Cadillac it’s the top of the gray cone at the bottom center, in Showist it’s the olive

green area that seems to propel itself leftward, Hijack is a tough one, but I can’t take my eyes off that incredibly assertive small swath of orange that makes a mini arc at the right-center of the painting. Sometimes it’s a big thing, this tether, but often it’s a small element, sometimes a little child will lead them.) Tension and release, areas of tight energy then radiating and diffusing outward, almost centrifugal in nature, that’s a Couwenberg move, action and echo, a balance always achieved at last. But so much of the allure of Alex Couwenberg’s work resides in the stylistic idiom that his hand and eye and mind always gravitates toward, that is some reflexive part of his being, his way of ordering himself through the world. It’s an incredible communing with the fundamentals of a kind of so cool SoCal Modernism, a here muted beckoning of a giddy California 1960s design, for sources it’s all woofers all the time, Philco TVs meet Valley burger joints, Jazz LP covers in a Ford Fairlane, TV antennas from the Brady Bunch house, funny-car decals, the curve and the swerve, like nothing exists but bulbous swivel chairs and sleek hi-fi components. None of those things actually appear in any of these paintings, but their aura everywhere does, Couwenberg’s got all this stamped in his DNA, if DNA was only a bit more oval and torqued. It’s not nostalgia, certainly not retro, or only marginally and obliquely so, it’s a visual manifestation of time and place, as connected to its context as European Cubism is to the

staccato rhythms of early modern urbanism. Couwenberg summons the attentive optimism of SoCal design culture, its bold curves and upbeat rhythms, he layers and de- and reconstructs them, he channels them from function to pictorial language because it’s his vernacular culture, because it’s his. These new paintings, soberly and with exquisite control and attention to detail, appear to me to evoke these things and more. Let’s close with Alt (tether? For me it’s the small vertical greenish rectangle at the bottom center). It takes you for a skillful spin in and around itself, with thin lines and sweeping arcs releasing and resolving its density in several directions towards its edges, a taut image of great concentration then gently dissipating outward. Above all else what I appreciate in it and in the work of Alex Couwenberg is that balance of tension and release, of passages of such focus and hypersensitivity that I think they can never be escaped--and then suddenly they are, in images that always manage to negotiate their way through the seemingly contradictory zones of multiple interpenetrative attentiveness and the equanimity of resolution and calm. They’re complexity resolved.

James Yood teaches modern and contemporary art history at the School of the Art Institute of Chicago, where he also directs its New Arts Journalism program.