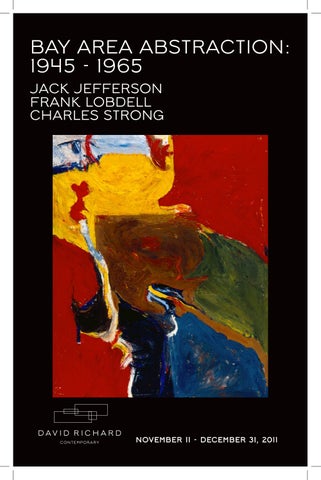 Curated by David Eichholtz in collaboration with Charles Strong.

David Richard Contemporary and David Eichholtz thank Charles Strong for his enthusiasm and passion for Abstract Expression and his commitment to the work and legacy of his Bay Area mentors and colleagues. We also thank Charles Strong, Lilly Fenichel, Mary Fuller McChesney, Margaret Mathews-Berenson John Obrecht and Francis Mill for their invaluable conversations, insights and stories as well as their support and encouragement for this exhibition.

Abstract Expressionism dominated Post-War American art and was explored in parallel on the two coasts—in New York with notable figures such as Pollock, DeKooning, Motherwell, and Newman, and in San Francisco with painters such as Diebenkorn, Francis, Bischoff, Dugmore, Smith, Jefferson and Lobdell. There were striking similarities in the work produced from the two cities in terms of thick gestural brushstrokes laid down in bold colors on large canvases. Yet, differences emerged: the Bay Area abstractionists were less influenced by European tendencies of the time and more by Asian culture, the ethos of the Beat generation, and the expansiveness and new social freedom of California life. Clyfford Still, a common link between the two coasts, was a forerunner of pure abstraction. By the mid-1940s, Still had emptied his paintings of any representation and the titles he gave them were entirely non-referential, consisting only of dates and series numbers. Still taught at the California School of Fine Arts (now the San Francisco Art Institute), where he had a profound influence on many of the students, including Jack Jefferson and Frank Lobdell. Perhaps the most extraordinary aspect of this period at the California School of Fine Arts was the mutual collegial respect between teacher and student, a respect more like that between junior and senior or peer and mentor. These artists shared

a personal chemistry and a passion both, intellectual and visceral for abstract art, and that common cause held the San Francisco School of Abstract Expressionism together even more tightly than its New York counterpart. Jack Jefferson’s quiet and understated demeanor, combined with his bold and purposeful approach to art, defined his career and subsequent interactions with students when he taught at the California School of Fine Arts. Normally dark and moody, his artwork changed with each new studio location, and the titles he gave them reflected various addresses in and around San Francisco. Frank Lobdell was influenced by primitive cultures and symbols; as a result, his early work, while gestural and abstract, frequently incorporated biomorphic shapes and figuration. The unique symbolic “language” that he developed became his way of expressing frustration with man’s inhumanity towards man and the atrocities of war. Early in his career, while still living in his native Colorado, Charles Strong had the good fortune to meet and interact with Clyfford Still. Strong did not study with Still directly when he came to the CSFA, but under his students Jefferson and Lobdell. He was also influenced by another prominent presence at the school, Hassel Smith. Throughout his oeuvre Strong demonstrates an unwavering commitment to Abstract

Expressionism. He developed a distinctive gritty, textured approach that transitioned through the 1960s from dark neutralized colors in blocky abstractions suggesting the rock formations of Colorado’s mountains to fluid, vibrantly colorful compositions more evocative of volcanic eruptions, hot lava, and deep geological journeys to the earth’s inner core. Hassel Smith, Robert McChesney, Edward Dugmore—who also studied with Still and was a contemporary of Jefferson & Lobdell during his time in San Francisco— and several of Smith’s students, including Madeleine Dimond, Lilly Fenichel, James Kelly and Deborah Remington, were notable Bay Area painters of the postwar era in addition to being friends and colleagues

of Jefferson, Lobdell and Strong. Lynn Faus and Michael Kennedy, a couple of younger Bay Area Abstractionists, studied at the San Francisco Art Institute with Jack Jefferson. The California School of Fine Arts is the common link among all of these artists, demonstrating an artistic lineage across three generations that started with Clyfford Still and was perpetuated by Jefferson, Lobdell, Smith, and Strong. Each of them developed an individual style and method of painting that allowed them to have their own voice among the common artistic training and language they all shared in San Francisco. Santa Fe October 2011

San Francisco is a painting town. Only New York, among American art cities, rivals the “City by the Bay” in its passion for and commitment to painting. But in New York, long the center of the international art market, audience taste and reception has often obscured the discourse among painters. In San Francisco, although that discourse may frequently be abjured by serious artists, artists still take that discourse seriously – with little market influence to dissuade them. However true this is now, it was a given a half-century ago. The medium – and act – of painting embodied a craft, a world view, a way of life and a philosophical redoubt for San Francisco artists working in the postwar period, to an extent that, arguably, even their compeers across the continent did not feel – and of which New Yorkers were little mindful. The very deferral to New York that San Francisco showed in its self-conscious land’send provincialism – a mixture of admiration and defiance – allowed New York painting to penetrate the Bay Area discourse (mostly through curatorial efforts in local museums), but hardly allowed California to return the favor. Indeed, when San Francisco painters moved to New York, or even showed there, they tended to be absorbed quickly into the community, their origins quickly obscured – and the distinct particulars of their common practice dissipated in the increasing hubbub of a

burgeoning international scene. Clyfford Still moved east in the early 1950s, and fought the mainstream from the moment he got there – making the mistake of thinking he could beat the mainstream at its own game, doing for New York what his pal Mark Rothko had done for San Francisco. Out west, Still could be genuinely ornery and profoundly influential; New York, by contrast, demanded a strategy to one’s orneriness, and Still never got the hang of it. To be sure, his highdudgeon attitude – not to mention the clear, high vision of his painting – gained him grudging respect in his new home. But Still’s erstwhile students and acolytes, less selfimportant, blended in better. As importantly, they left behind a painting scene in San Francisco that continued to flourish, and to maintain the values Still (and others) had nurtured there. Indeed, one of the things that irked Still so when he moved to the east coast was that, although unacknowledged, the San Francisco School could clearly lay prior claim to at least one of the New York School’s leading principles: the “Americanness” of Abstract Expressionism. In New York, the practical and intellectual models were primarily European. Artistic idioms such as Cubism and Surrealism comprised the backbone of Abstract Expressionist practice in New York; and, while an expansive, supposedly ahistorical physical

gesture informed such practice – its breadth amplified by the example of pre-war mural painting – it was clearly sourced in Western pictorial tradition. California Ab Ex was sourced in a western pictorialism of a different kind – one rooted in the American west, devoid of any artistic practice that hadn’t at least been modified to deal with the dramatic vastness and variety of North America’s terrain. At least as importantly, so many of the San Francisco School’s participants were themselves products of Manifest Destiny, born and raised either on the Pacific Coast or in the rugged interior. Their sense of space was no more European than was their sense of history or society or even myth. (Interestingly, the foreign-born New York artists to whom they most responded – Gorky, Rothko, Newman – were also natives of Russian and Caucasian “big-sky country;” and the one central-European artist-teacher to leave a profound mark on Bay Area abstractionists, Hans Hofmann, was a vigorous proponent of landscape painting and responsiveness to available space.) Clyfford Still was himself a native of North Dakota. The three artists featured in this exhibition, all of whom were more or less directly influenced by Still, are likewise sons of the interior – Jack Jefferson from South Dakota, Charles Strong from Colorado, Frank Lobdell from Kansas City. True, the artists included in the pendant

exhibition do not all hail from the American heartland, but all, having studied in and around the California School of Fine Arts (renamed the San Francisco Art Institute in 1961) – that is, at the epicenter of Bay Area gestural abstraction – clearly evince an embrace of this open, American sensibility. (Historian Barbara Novak identified an earlier American landscape tendency as manifesting a “still small voice.” Perhaps the sensibility at issue here manifested a “large Still voice.”) This is not to say that Jefferson, Lobdell or Strong entirely abandons compositional premeditation. Lobdell is noted for his quasinotational approach, an urgent but playful sense of line, contour, and even inferred symbol that in some ways mirrors the pictographic practices prevalent in New York in years immediately after the War (around the time Lobdell himself emerged in San Francisco). But one of the qualities that most distinguishes Lobdell’s art from that of 1940s Rothko, Newman or Gottlieb is his use of such markings as incipient topographies rather than as incipient alphabets. Lobdell’s lines – abetted by his palette, luminous even at its earthiest – seem to map space rather than document idea or speech. Similarly, there is a topographic impulse to Jefferson’s tumultuous paintings. Their elements abut one another aggressively, but come together on the canvas with an

inner logic – a pictorial logic, to be sure, but also a geo-logic, a feeling of land masses and tectonic plates moving coherently, however violently, in response to gravity. Their inferred motion is as ponderous as it is massive, and they seem to be shaping one another with their mutual inexorability. If Lobdell’s colors breathe organic vitality into his marks, Jefferson’s endow his with optical, and by inference, physical depth. Most of all, Jefferson’s entire aesthetic proposes a sense of a fluid earth, a globe – and by extension cosmos – that evolves according to its own natural principles. If anything, this is a kind of Abstract Naturalism. Charles Strong’s style relates closely to that of his friend Jefferson, and also displays earmarks of Still’s. (Still was Jefferson’s teacher; he had a more fleeting acquaintance with, if still significant impact on, Strong.) Strong captures a very different, much more rapid sense of time and flow. If Jefferson’s elements grind into one another, Strong’s claw at and consume each other, their flux far more vivid and pressing, more chemical than solid. In effect, while Jefferson seems to slow down Still’s crackling patterns, Strong seems to hasten them, investing them with an organic animation – a bio-logic, as opposed to Jefferson’s geo-logic (or, if you would, Still’s eco-logic), time. There is a bio-logic time operating in Lobdell’s work as well, but his formal vocabulary maintains a complexity and intricacy that, you

could say, puts it on a higher biological order than Strong’s. If Lobdell formulates creatures, Strong conjures the amino soup from which they emerge – and Jefferson the earthbound processes that forge amino molecules out of carbon in the first place. What all three painters shared – and shared at least to a certain extent with Still (not to mention their colleagues represented in the pendant show) – was a devotion to a vision that required them to work out beyond themselves. Unlike the New York School (and, for that matter, the European informel painters), the social and artistic attitudes prevailing among San Francisco School painters never emphasized individual career achievement, much less fetishize the superficial distinctions of style. They stressed instead a painter’s discovery of fundamental conditions, existential or (as evidenced by these three painters) elemental. Gerald Nordland has noted that the painters gathered at the California School of Fine Arts sought “an unpretentious, painterly, ‘American’ look.” Intellectually unpretentious, this look was anything but unprepossessing. It was, however, extremely painterly – and profoundly American. Los Angeles November 2011