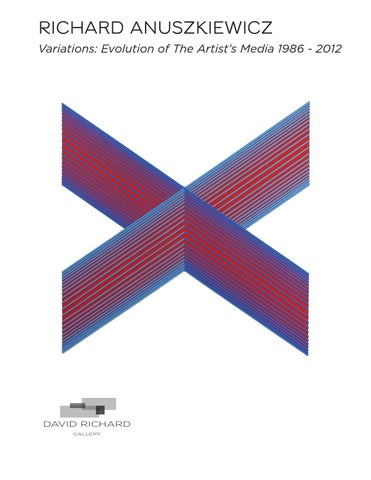 Visionary Geometry: The Sculpture of Richard Anuskiewicz by John Yau I. In 1955, Richard Anuszkiewicz earned his M.F.A. from Yale University, where he had gone to study with Josef Albers. The title of his master’s thesis was A Study in the Creation of Space with Line Drawing. Fifteen years later, in 1970, the artist described his thesis in an interview: It was on how to create space with line drawing, how line creates space. I did it historically, showing how the spatial idea differed in different periods. Then I talked about contemporary drawing and how the contemporary artist just with pure line creates space, what happens with just line and different ways of creating space. This study was very beneficial to my own work. i While Anuszkiewicz has long been regarded as a central figure of Op Art, such a restrictive categorization is wrong for two reasons. The first is that it isolates his achievement from his contemporaries, Frank Stella, Gene Davis and Ellsworth Kelly, as well as from younger artists such as Sanford Wurmfeld, whose interest lie in the variety of optical vibrancy that can be attained through the use of color, form, line and duration. The second reason, which I will explain later in this essay, is that Anuszkiewicz’s interest in “Temples” and “Portals,” as he has titled two of his recent series, suggests an underlying preoccupation with what can’t be seen, with what only the imagination can complete. Anuszkiewicz has had a lifelong interest in a purely visual phenomenon in which two colors – because they are set against each other – refuse to stay still. It is this preoccupation that has led observers to link him with Op Art. In contrast to Bridget Riley, who between the years 1961 and ’64 used black and white and occasionally gray to bend the picture plane to an extreme, often theatrical degree in her paintings, Anuszkiewicz has always maintained a more rigorous and qualified relationship to the trompe l’oeil side of Op Art. Perhaps this is because he recognizes how easily it can devolve into a form of entertainment, a kind of visual magic trick. Anuszkiewicz’s rejection of the overtly dramatic aspects of the graphic side of Op Art, along with the emphasis on visual trickery that one also finds in Victor Vasarely, distinguishes him from other artists associated with this tendency. Anuszkiewicz’s use of trompe l’oeil is always a synthesis in which the form and the image establish an open dialogue. At the same time, his use of strong, almost neon-like, acidic colors, usually set in contrasts of hot and cool, en-

dows his work with an unabated restlessness. The colors will never settle into one place, which we could read almost allegorically as being about the artist himself. For while Anuszkiewicz hasn’t radically changed his work or thinking since graduating from Yale, he has always kept moving by refining and expanding the focus of his preoccupations, one of which is the way line creates space. II. Between 1984 and ’86, while working on his Temple series, which was inspired by a trip he took to Egypt in 1981, Anuszkiewicz began striating the surface in a way that suggested a receding space, the entrance to a sacred room. In the Translumina works, as he collectively titled them, Anuszkiewicz breaks out of the rectangular format that he had worked in throughout his career, typically rotating the striated column-like rectangles to an angle of 45 degrees. In the painting Translumina - Rhombus 1 (1987), the four striated rectangles overlap each other, like the four flaps of a box, when closed. Set against a flat, green ground, the trompe l’oeil columns define a green square in the center. Although the surface is flat, the trompe l’oeil columns shift between the two-dimensional and the volumetric, and between flatness and convexity, without comfortably settling in either perceptual category. This refusal to resolve into a single category can be seen as one of the keys to Anuszkiewicz’s work. He recognizes that seeing is limited, that we must see and touch something to know it. However, unlike the artists connected with Op Art, he is interested in something more. I would argue that in his inventive, rigorous explorations of the tension between two-dimensionality and three-dimensionality, Anuszkiewicz reveals his philosophical disposition. As he pushes further into this territory, which he does in works such as Translumina – Transparent Square (1987) – with its four elongated, open, overlapping rectangles, each in a different color (red, blue, orange and green) – he compels us to untangle the rectangles, figuring out what overlaps what, as we simultaneously focus on the various squares implied by the construction. We become aware of differences, disruptions and continuities in a way that can be exhilarating if we succumb to our experience. With Anuszkiewicz’s Translumina series, the act of seeing is both exciting and questioning. We want to be sure of the physical form of the thing we see, to test its material existence against what we perceive of it. One thing that happens in Translumina – Transparent Square is that the open squares formed by the red, blue, green and orange rectangles and the skeletal structures become solid planes as well as apertures revealing the wall on which the piece is mounted.

In the freestanding hybrid painting-sculpture, Translumina – Opaque Triangle: Yellow Green, Green and Blue (1990), Anuszkiewicz used thin strips of painted wood to outline three overlapping and interpenetrating skeletal structures (they are akin to boxes for long stemmed roses inside). The configuration invites the viewer to complete the rest of forms. This, I would advance, is what separates him from Op Art and places him in closer proximity to visionary artists, whose primary goal is to get viewers to see what isn’t there, which is commensurate with seeing that which cannot be seen. We are apt to read the interiors of Anuszkiewicz’s outlined forms and planes in space as both empty air and solid but transparent mass. His Translumina series shares something with the acrylic yarn sculptures of the minimalist, conceptual-based sculptor, Fred Sandback. And yet, as with Sandback, for all that Anuszkiewicz’s sculptures are completely straightforward and even literal; there is no visual deception. When we look at the work we see exactly how Anuszkiewicz did it. One could say that he wants us to see the bones of the piece, even as we fill in the spaces and imagine that the air outlined by a colored line is a solid thing. In the history of sculpture, David Smith, in works such as Australia (1951), challenged the traditional view of sculpture as defined by volume and mass. In Australia, the activity takes place along the sculpture’s periphery. In his enamel on wood construction, Translumina – Opaque Rectangle: Oranges, Red, Green and Blue (1990), the viewer completes the boxes where they are interrupted. The dance between completeness and incompleteness – and how far the mind imagines Anuszkiewicz’s line in space will go – connects him to Piet Mondrian, particularly in the latter’s late paintings where a black horizontal band does not always traverse the entire painting. In the elegant, enamel-on -steel sculpture, Intersecting Red (1994), a red line pierces the two trapezoidal planes – one blue and the other green – which face each other as they seem to recede into space. Anuszkiewicz has made the air inside the planes solid, effectively returning mass and volume into sculpture. At the same time, by effectively making air and solid mass interchangeable, Anuszkiewicz places himself squarely within the Western tradition of art that focuses on the relationship between matter and light, the earthly and the spiritual. And, like all innovative artists, he brings something fresh to that history, extending it into the 21st Century. Joseph Slate, “So Hard To Look At: An Interview with Richard Anuskiewicz”, Contempora, May/June 1970, p. 9

Richard Anuskiewicz studied at Yale University with Josef Albers and at age 82, his art making still focuses on color and visual perception. His artwork has been featured in over 340 solo and group exhibitions since 1951 and recently included in the international exhibition, Dynamo: A Century of Light and Motion in Art, 1913 - 2013 at the Galeries Nationales du Grand Palais, in Paris (France). He was included in seminal exhibitions that ushered in Op Art, such as Vibrations Eleven, Martha Jackson Gallery, New York, January 6 - 31, 1965 and The Responsive Eye, Museum of Modern Art, New York. February 23 - April 25, 1965 and early in his career, he was represented by the important Sidney Janis Gallery of New York. Anuszkiewicz’s art is included in the permanent collections of over 70 museums around the world including: Art Institute of Chicago, Chicago, IL; Guggenheim Museum, New York, NY; Metropolitan Museum of Art, New York, NY; Museum of Modern Art, New York, NY; and Whitney Museum of American Art, New York, NY, among others.