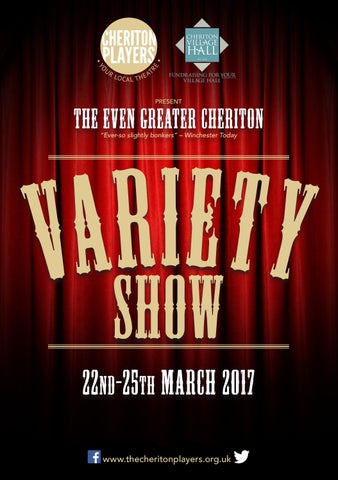 The (Even Greater) Cheriton

THe even greater cheriton

RIETY VASHOW From our Chair Cheriton Players and the Village Hall committee have great pleasure in bringing to you another, Even Greater Variety Show. Greater than what you may ask? Well, if you were lucky enough to have been with us in 2015 for The Great Cheriton Variety Show, you will remember a great night, great sketches, singing, poems and frivolity. Tonight you will be treated to even more fun and silliness and we’re certain that your chuckle muscles will be thoroughly exercised. The team behind tonight’s show has been working hard for months creating this extravaganza. Rehearsals have been a mixture of fun, frustration and fancifulness. The team is to be applauded for its tenacity, ingenuity

and creativity. Thanks go to each and every one of them, whether on stage or behind the scenes. Look out for more events in the coming months: Cheriton Players will present a murder mystery on June 17th and the Village Hall committee has organised an outdoor pop up opera on June 24th. Tickets are already on sale for both of these events, as part of the village hall fundraising campaign. So please join us in the ‘ever so slightly bonkers’ mood of tonight’s performance and have fun as we present The Even Greater Cheriton Variety Show! Marilyn Weston

theatre, music and the arts – which, importantly, they are very happy to share with others. Thank you to our wonderful performers tonight, they have all worked very hard to create a really exciting show for you. I am particularly grateful for their enthusiasm, patience and good humour throughout. It’s been great fun in the making! Starting with a few sketchy ideas at our first get-together, when one never really knows if five or fifty people will turn up, the initial uncertainty is quickly replaced by eager anticipation and, suddenly, everything becomes possible; the show begins to develop a life of its own; the creative juices flow – and the voyage of discovery has begun! Creating a Variety Show is rather like planting a garden border with those random (often unidentified) packets and tins of seeds you’ve been saving and, whilst you may have a shrewd idea what some are, the real excitement is that you don’t really know what will transpire – until they’re all in full bloom! Luckily (and warming to my horticultural theme), I have been fortunate to have a strong team of green-fingered friends – and I would like

to express my special thanks to my talented co-directors, Sue Cox and Helena Gomm, without whose vision, dedication and skill this fertile plot could so easily have become an exuberant wilderness! There are a great many who have ensured that our creation truly lives up to its billing as Cheriton’s ‘Even Greater’ Variety Show and we owe a debt of gratitude to them all. Whilst it’s not possible to mention everyone (please do check out all of the credits in this programme), I would just like to highlight David Cradduck for ensuring the smooth running of all the mechanics; Paddy Roadnight for eloquently guiding you through our ‘garden’; Maureen Cheong for arranging the plants to maximum effect; Pauline Cornter for finding enough Wellington Boots and Sou’westers; Jamie Herdman and Graham Arnott for their illuminations and bird-scaring devices; Penny and Simon Scott, Viv Pain, Marilyn Weston and the Village Hall Committee for fertilisers and liquid nourishment; David Wright and Peter Reay for constructing the raised beds and fencing; Angela Ledsham for taking control of the Potting Shed and to Sue Herdman and team for their careful shepherding! Enjoy the show! Paul Hellard

Our special thanks to all those who have helped in any way ‘behind the scenes’, especially those who lent costumes or props or who gave of their time so freely. 75% of the profits from this production will be donated to the Cheriton Village Hall Fundraising Campaign and will go towards the purchase and refurbishment of the hall. 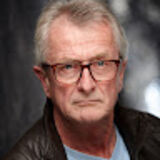