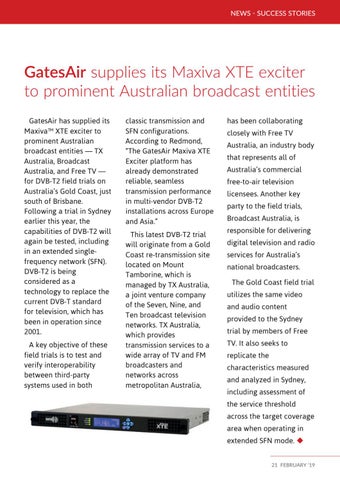 GatesAir supplies its Maxiva XTE exciter to prominent Australian broadcast entities GatesAir has supplied its Maxiva™ XTE exciter to prominent Australian broadcast entities — TX Australia, Broadcast Australia, and Free TV — for DVB-T2 field trials on Australia’s Gold Coast, just south of Brisbane. Following a trial in Sydney earlier this year, the capabilities of DVB-T2 will again be tested, including in an extended singlefrequency network (SFN). DVB-T2 is being considered as a technology to replace the current DVB-T standard for television, which has been in operation since 2001. A key objective of these field trials is to test and verify interoperability between third-party systems used in both

classic transmission and SFN configurations. According to Redmond, “The GatesAir Maxiva XTE Exciter platform has already demonstrated reliable, seamless transmission performance in multi-vendor DVB-T2 installations across Europe and Asia.” This latest DVB-T2 trial will originate from a Gold Coast re-transmission site located on Mount Tamborine, which is managed by TX Australia, a joint venture company of the Seven, Nine, and Ten broadcast television networks. TX Australia, which provides transmission services to a wide array of TV and FM broadcasters and networks across metropolitan Australia,

has been collaborating closely with Free TV Australia, an industry body that represents all of Australia’s commercial free-to-air television licensees. Another key party to the field trials, Broadcast Australia, is responsible for delivering digital television and radio services for Australia’s national broadcasters. The Gold Coast field trial utilizes the same video and audio content provided to the Sydney trial by members of Free TV. It also seeks to replicate the characteristics measured and analyzed in Sydney, including assessment of the service threshold across the target coverage area when operating in extended SFN mode.  21 FEBRUARY ‘19 In this issue: RTL Nederland, an exclusive interview with its CTO; special report about ISE; AV integration at museums, and Sony HXC-FB80 ca...

In this issue: RTL Nederland, an exclusive interview with its CTO; special report about ISE; AV integration at museums, and Sony HXC-FB80 ca...