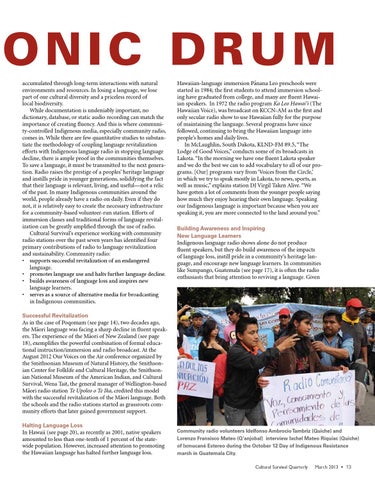 onic Drum accumulated through long-term interactions with natural environments and resources. In losing a language, we lose part of our cultural diversity and a priceless record of local biodiversity. While documentation is undeniably important, no dictionary, database, or static audio recording can match the importance of creating fluency. And this is where community-controlled Indigenous media, especially community radio, comes in. While there are few quantitative studies to substantiate the methodology of coupling language revitalization efforts with Indigenous language radio in stopping language decline, there is ample proof in the communities themselves. To save a language, it must be transmitted to the next generation. Radio raises the prestige of a peoples’ heritage language and instills pride in younger generations, solidifying the fact that their language is relevant, living, and useful—not a relic of the past. In many Indigenous communities around the world, people already have a radio on daily. Even if they do not, it is relatively easy to create the necessary infrastructure for a community-based volunteer-run station. Efforts of immersion classes and traditional forms of language revitalization can be greatly amplified through the use of radio. Cultural Survival’s experience working with community radio stations over the past seven years has identified four primary contributions of radio to language revitalization and sustainability. Community radio: • supports successful revitalization of an endangered language. • promotes language use and halts further language decline. • builds awareness of language loss and inspires new language learners. • serves as a source of alternative media for broadcasting in Indigenous communities.

Hawaiian-language immersion Pa-nana Leo preschools were started in 1984; the first students to attend immersion schooling have graduated from college, and many are fluent Hawaiian speakers. In 1972 the radio program Ka Leo Hawai’i (The Hawaiian Voice), was broadcast on KCCN-AM as the first and only secular radio show to use Hawaiian fully for the purpose of maintaining the language. Several programs have since followed, continuing to bring the Hawaiian language into people’s homes and daily lives. In McLaughlin, South Dakota, KLND-FM 89.5, “The Lodge of Good Voices,” conducts some of its broadcasts in Lakota. “In the morning we have one fluent Lakota speaker and we do the best we can to add vocabulary to all of our programs. [Our] programs vary from ‘Voices from the Circle,’ in which we try to speak mostly in Lakota, to news, sports, as well as music,” explains station DJ Virgil Taken Alive. “We have gotten a lot of comments from the younger people saying how much they enjoy hearing their own language. Speaking our Indigenous language is important because when you are speaking it, you are more connected to the land around you.” Building Awareness and Inspiring New Language Learners

Indigenous language radio shows alone do not produce fluent speakers, but they do build awareness of the impacts of language loss, instill pride in a community’s heritage language, and encourage new language learners. In communities like Sumpango, Guatemala (see page 17), it is often the radio enthusiasts that bring attention to reviving a language. Given

As in the case of Poqomam (see page 14), two decades ago, the Ma-ori language was facing a sharp decline in fluent speakers. The experience of the Ma-ori of New Zealand (see page 18), exemplifies the powerful combination of formal educational instruction/immersion and radio broadcast. At the August 2012 Our Voices on the Air conference organized by the Smithsonian Museum of Natural History, the Smithsonian Center for Folklife and Cultural Heritage, the Smithsonian National Museum of the American Indian, and Cultural Survival, Wena Tait, the general manager of Wellington-based Ma-ori radio station Te Upoleo o Te Ika, credited this model with the successful revitalization of the Ma-ori language. Both the schools and the radio stations started as grassroots community efforts that later gained government support. Halting Language Loss

In Hawaii (see page 20), as recently as 2001, native speakers amounted to less than one-tenth of 1 percent of the statewide population. However, increased attention to promoting the Hawaiian language has halted further language loss. 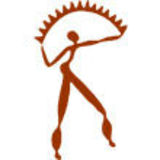