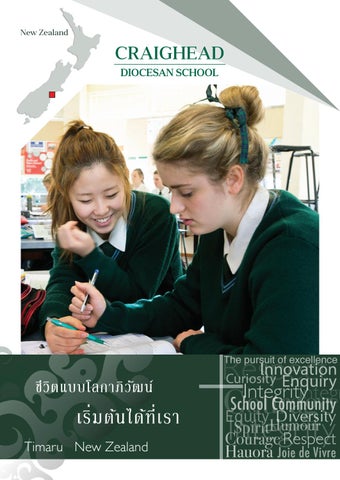 Strength Spirit Success Strength Craighead Diocesan School is one of the outstanding girlsâ&amp;#x20AC;&amp;#x2122; schools of New Zealand. We work to our strengths. Whether it is in academic, sporting or cultural activities, Craighead ranks with the very best. Our NCEA results are exceptional. The relationship between the staff and students is built upon a combination of innovative learning and traditional values. Academic ability is nurtured with emphasis upon the pursuit of excellence in all endeavours, and the school is recognised for this. Spirit The Special Character of the School is based on the Christian faith in the Anglican tradition with a strong sense of values. The students are mature beyond their years, with a discerning intellect and a sincere empathy for local, national and global communities. Success The Craighead girls of today will become the leaders of tomorrow.