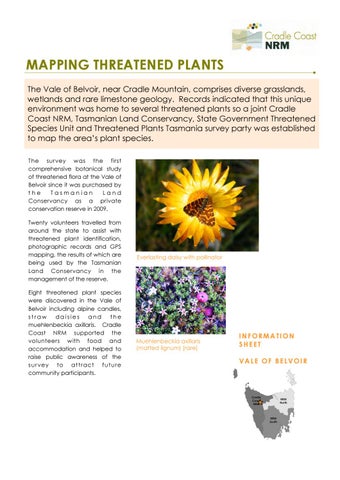 MAPPING THREATENED PLANTS The Vale of Belvoir, near Cradle Mountain, comprises diverse grasslands, wetlands and rare limestone geology. Records indicated that this unique environment was home to several threatened plants so a joint Cradle Coast NRM, Tasmanian Land Conservancy, State Government Threatened Species Unit and Threatened Plants Tasmania survey party was established to map the areaâ&#x20AC;&#x2122;s plant species. The survey was the first comprehensive botanical study of threatened flora at the Vale of Belvoir since it was purchased by the Tasmanian Land Conservancy as a private conservation reserve in 2009. Twenty volunteers travelled from around the state to assist with threatened plant identification, photographic records and GPS mapping, the results of which are being used by the Tasmanian Land Conservancy in the management of the reserve. Eight threatened plant species were discovered in the Vale of Belvoir including alpine candles, straw daisies and the muehlenbeckia axillaris. Cradle Coast NRM supported the volunteers with food and accommodation and helped to raise public awareness of the s u rv e y t o a t t r act fut u re community participants.

ACKNOWLEDGEMENT The project was delivered by Threatened Plants Tasmania and the Tasmanian Land Conservancy, supported by Cradle Coast Natural Resource Management (NRM) through funding from the Australian Governmentâ&#x20AC;&#x2122;s Caring for our Country