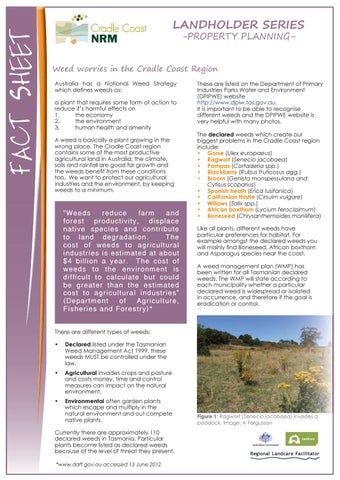 Weed worries in the Cradle Coast Region Australia has a National Weed Strategy which defines weeds as: a plant that requires some form of action to reduce it’s harmful effects on 1. the economy 2. the environment 3. human health and amenity A weed is basically a plant growing in the wrong place. The Cradle Coast region contains some of the most productive agricultural land in Australia; the climate, soils and rainfall are good for growth and the weeds benefit from these conditions too. We want to protect our agricultural industries and the environment, by keeping weeds to a minimum.

These are listed on the Department of Primary Industries Parks Water and Environment (DPIPWE) website http://www.dpiw.tas.gov.au. It is important to be able to recognise different weeds and the DPIPWE website is very helpful with many photos. The declared weeds which create our biggest problems in the Cradle Coast region include: • Gorse (Ulex europaeus) • Ragwort (Senecio jacobaea) • Pampas (Cortaderia spp.) • Blackberry (Rubus fruticosus agg.) • Broom (Genista monspessulana and Cytisus scoparius) • Spanish heath (Erica lusitanica) • Californian thistle (Cirsuim vulgare) • Willows (Salix spp.) • African boxthorn (Lycium ferocissimum) • Boneseed (Chrysanthemoides monilifera) Like all plants, different weeds have particular preferences for habitat. For example amongst the declared weeds you will mainly find Boneseed, African boxthorn and Asparagus species near the coast. A weed management plan (WMP) has been written for all Tasmanian declared weeds. The WMP will state according to each municipality whether a particular declared weed is widespread or isolated in occurrence, and therefore if the goal is eradication or control.

There are different types of weeds: •

Declared listed under the Tasmanian Weed Management Act 1999, these weeds MUST be controlled under the law.

Agricultural invades crops and pasture and costs money, time and control measures can impact on the natural environment.

Environmental often garden plants which escape and multiply in the natural environment and out compete native plants.

Currently there are approximately 110 declared weeds in Tasmania. Particular plants become listed as declared weeds because of the level of threat they present. *www.daff.gov.au accessed 13 June 2012.

Weed worries in the Cradle Coast Region Some Agricultural weeds are also declared weeds, such as ragwort and Californian thistles. Other agricultural weeds, for example wild radish and capeweed, are not declared but can be costly to control, and in many cases are toxic to stock. These include: • Spear thistle • Capeweed • Wild radish • Dock • Cumbungi • Poa aquatica/ Glyceria maxima Environmental weeds are often common garden plants and usually spread by birds or garden waste dumped inappropriately. Coastal properties and bush areas can be particularly vulnerable to environmental weeds such as: • Asparagus fern (also declared) • Cotoneaster • Fuchsia • Agapanthus • Holly • Ivy • Mirror bush • Foxglove • Sweet pittosporum • Perriwinkle

Weeds spread in the environment as plant material or through seed dispersal. Plant material might be dumped garden waste, whereas seeds are naturally dispersed by • animals and birds • wind and water • soil movement • seed pod actions Unintentional spread of weeds occurs with • topsoil on machinery moved from one area to another; • gravel and quarried materials contaminated with seed such as gorse and broom; • soil on peoples’ boots; • along roadsides where vehicles produce air currents which move wind blown seed; • hay making machinery or hay bales moved from one area to another; • fodder, grain or birdseed.

Weed worries in the Cradle Coast Region Planning your weed control is very important because you need to consider: • •

which method or combination of methods - mechanical, chemical, biological or manual mechanical control may result in weed heaps which need to be burnt, therefore the placement of the heaps needs to be thought out, and whether a fire permit will be necessary special precautions if using chemicals in waterways estimate a patch size that you can manage to control, and only take on an area where you know you can carry out follow up work. A lot of time, effort and money is wasted in weed control by not being able to follow up

start with smaller, outlier patches and work into the largest patch time of year is critical for successful weed management the mantra for weed control is follow up follow up follow up all plants are like us and need a space to live. Weeds are often plants which rapidly colonise bare ground and out compete other plants. When planning weed management, don’t leave bare ground for more weeds to re-colonise. The timing for re-planting with beneficial plants is critical though, not too soon in case soil stored seed germinates, but before other weeds take over the bare ground.

Different methods of weed control: Heavy machinery such as an excavator or dozer can be used for raking up dense woody weed infestations, for example gorse, or removing willows from rivers and streams in conjunction with the cut stump and paint method. A meri-crusher attached to a tractor is another method of gorse control which mulches the gorse material (see image). Heavy machinery can be a good, initial option if weed infestations such as gorse or broom are large and dense. However, mechanical control creates soil disturbance, so landholders need to be aware that after the initial control, a mass germination will occur from soil stored seed, and the mantra FOLLOW UP control, is imperative. An excavator can also be used for the removal of Poa aquatica (Glyceria maxima) and Cumbungi (Typha spp.). The benefits of mechanical control mean that less chemical is being applied, particularly if the target weeds occur in a waterway. However the machine operator needs to be very careful not to alter the structure of the waterway. Also consider that the excavated material (gorse or Poa aquatica or willows) still needs to be disposed of, which may require burning the heap.

Meri-crusher at work on a dense gorse infestation. Image: A Fergusson

We would all like to use fewer chemicals in the environment, but sometimes the careful use of chemicals can result in less physical disturbance to a site. In a particular situation it may be possible to use the cut and paint method, or drill and fill which are very target specific applications, rather than spraying which has the potential to harm non-target plants. The most important message for chemical use is to READ THE LABEL, and mix only at the rates as directed. Use the correct chemical for the task and please consider your own safety and biodiversity. It is possible to look at chemical labels and Material Safety Data Sheets (MSDS) on line before purchasing chemicals, and guidelines are also given on DPIPWE weed website under the chemical control link for specific weeds.

The Bradley method was pioneered by two sisters in Sydney who wanted to remove weeds from bush areas. The method revolves around minimal disturbance, hand weeding if possible, and allowing native vegetation to re-establish naturally. Importantly start with the outliers, small isolated patches and work into the thickest patch of weeds. Also don’t clear large patches of weeds at one time which results in bare ground and weeds recolonising; give natives a chance to germinate and establish ground cover before removing the next patch of weeds.

ChemCert courses are run periodically in all states; these courses are accredited and cover safe chemical handling and use. For more information phone 1800 444228. Wearing the correct protective equipment is essential, and can include gloves, face mask, long sleeved shirt and trousers as a minimum.

Hand pulling can be very successful as long as it is followed up. Other manual removal methods are: cut and paint method where the stem or trunk of the weed (gorse for example, is cut with a saw and then Glyphosate is applied to the cut stump, within 30 seconds of cutting. This method results in much less chemical in the environment, the chemical is not applied with a sprayer so is safer for the operator and results in targeted application. The cut material will still need to be disposed of appropriately . Controlling weeds in or near waterways is especially challenging. By law a person must not apply chemicals within 0.5 km upstream of potable water intake in flowing water (a river or stream), or within 0.5 km of a potable water intake in a standing body of water such as a lake, pond or reservoir. Roundup Bioactive® or Weedmaster 360® without added surfactants are the only safe option for infestations near waterways (these are the only herbicides registered for use near waterways).

Spraying in a sensitive area, operator using correct personal protective equipment and a dye in the spray. Image: J Cooper Biological A number of different biological control agents are used in Tasmania, for example the gorse spider mite lives in colonies on the host, covered by a web and feeds on the gorse plant. Often biological control weakens the host, or interferes with the fertility of the plant, but may not kill the host.

Weed worries in the Cradle Coast Region A number of good resources are available, such as: Guidelines for Safe and effective Herbicide Use Near Waterways (DPIPWE) Tasmanian Washdown guidelines for Weed and Disease Control (DPIPWE) Weed website http://www.dpiw.tas.gov.au PIRI-Tas http://www.dpiw.tas.gov.au PIRI-Tas stands for Pesticide Impact Rating Index, and is a tool available through DPIPWE to predict the potential for pesticides and herbicides to move through water and soil away from the property where the chemical was applied. The tool assesses factors such as soil type, rainfall and other climatic factors as well as chemical used, application rates and timing. For further information phone 1300 368 550.

Property Planning for Weeds in the Cradle Coast Region

Property Planning for Weeds in the Cradle Coast Region