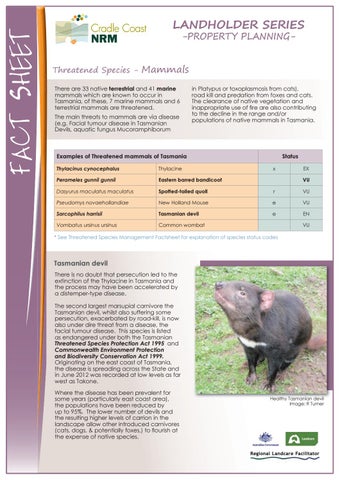 in Platypus or toxoplasmosis from cats), road kill and predation from foxes and cats. The clearance of native vegetation and inappropriate use of fire are also contributing to the decline in the range and/or populations of native mammals in Tasmania.

Examples of Threatened mammals of Tasmania

Tasmanian devil There is no doubt that persecution led to the extinction of the Thylacine in Tasmania and the process may have been accelerated by a distemper-type disease. The second largest marsupial carnivore the Tasmanian devil, whilst also suffering some persecution, exacerbated by road-kill, is now also under dire threat from a disease, the facial tumour disease. This species is listed as endangered under both the Tasmanian Threatened Species Protection Act 1995 and Commonwealth Environment Protection and Biodiversity Conservation Act 1999. Originating on the east coast of Tasmania, the disease is spreading across the State and in June 2012 was recorded at low levels as far west as Takone. Where the disease has been prevalent for some years (particularly east coast area), the populations have been reduced by up to 95%. The lower number of devils and the resulting higher levels of carrion in the landscape allow other introduced carnivores (cats, dogs, & potentially foxes,) to flourish at the expense of native species.

Spread of Facial Tumour Disease to June 2012 Source: Save the Tasmanian Devil Program

Predominantly a scavenger, the devil is also a capable hunter, with its main diet composed of living and dead wallabies, various small mammals and birds along with carcases of farm animals. With extremely powerful jaws and teeth, the devil will devour entire carcasses including the bones, skin and fur. Currently the northwest still holds a good population, however with the disease making inroads and the ongoing numbers killed on our roads, it is important for the community to support actions to reduce losses.

Devil infected with DFTD Source: Save the Tasmanian Devil Program

Landholders can play their part in protecting the devil through slowing down on the roads at night, removing dead wildlife from roads where safe to do so and ensuring domestic fowl are in devil and quoll-proof chook pens. Devils will use fallen logs and occasionally wombat burrows as den sites, so it is recommended any potential sites be retained on your property.

Spotted-tailed quoll The second largest living marsupial carnivore, the spotted-tailed quoll is a threatened species and listed as rare in Tasmania and vulnerable under the Commonwealth EPBC Act. Most common in the north and west of Tasmania, the spotted-tailed quoll prefers wet forests and scrub and is an active and agile hunter. It will prey on small or injured wallabies, rats, reptiles, birds (including chickens) and invertebrates. This species is under threat from loss of habitat, persecution, roadkill and competition from other predators such as cats, dogs and foxes should they become fully established. .

Eastern barred bandicoot Virtually extinct in the wild on mainland Australia, there is still a functioning population in Tasmania. fu The Tasmanian population has suffered a downturn in numbers over recent years through threats su such as loss of habitat, predation by cats, dogs (and potentially foxes) and the disease Toxoplasmosis (carried by cats). Farmers value the bandicoot for their ability to reduce numbers of pasture pests such as corbies and grass grubs, and many are now planting undergrowth species to provide shelter, nest sites and habitat for the eastern barred bandicoot. Eastern barred bandicoot Image: Dave Watts