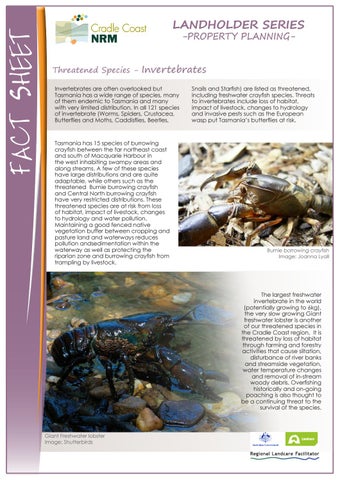 Invertebrates are often overlooked but Tasmania has a wide range of species, many of them endemic to Tasmania and many with very limited distribution. In all 121 species of invertebrate (Worms, Spiders, Crustacea, Butterflies and Moths, Caddisflies, Beetles,

Tasmania has 15 species of burrowing crayfish between the far northeast coast and south of Macquarie Harbour in the west inhabiting swampy areas and along streams. A few of these species have large distributions and are quite adaptable, while others such as the threatened Burnie burrowing crayfish and Central North burrowing crayfish have very restricted distributions. These threatened species are at risk from loss of habitat, impact of livestock, changes to hydrology and water pollution. Maintaining a good fenced native vegetation buffer between cropping and pasture land and waterways reduces pollution andsedimentation within the waterway as well as protecting the riparian zone and burrowing crayfish from trampling by livestock.

Snails and Starfish) are listed as threatened, including freshwater crayfish species. Threats to invertebrates include loss of habitat, impact of livestock, changes to hydrology and invasive pests such as the European wasp put Tasmaniaâ&#x20AC;&#x2122;s butterflies at risk.

The largest freshwater invertebrate in the world (potentially growing to 6kg), the very slow growing Giant freshwater lobster is another of our threatened species in the Cradle Coast region. It is threatened by loss of habitat through farming and forestry activities that cause siltation, disturbance of river banks and streamside vegetation, water temperature changes and removal of in-stream woody debris. Overfishing historically and on-going poaching is also thought to be a continuing threat to the survival of the species.

Examples of the threatened invertebrates of Tasmania

Some of our butterflies too are under threat from a lack of active management of their habitats such as native grasslands and sedgelands. The introduced European wasp is also known to prey on native insects, including butterflies, and the impact on these threatened species is thought to be substantial.