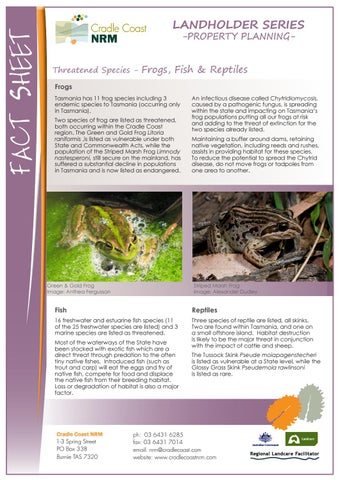 Frogs Tasmania has 11 frog species including 3 endemic species to Tasmania (occurring only in Tasmania). Two species of frog are listed as threatened, both occurring within the Cradle Coast region. The Green and Gold Frog Litoria raniformis ,is listed as vulnerable under both State and Commonwealth Acts, while the population of the Striped Marsh Frog Limnody nastesperoni, still secure on the mainland, has suffered a substantial decline in populations in Tasmania and is now listed as endangered.

An infectious disease called Chytridiomycosis, caused by a pathogenic fungus, is spreading within the state and impacting on Tasmaniaâ&#x20AC;&#x2122;s frog populations putting all our frogs at risk and adding to the threat of extinction for the two species already listed. Maintaining a buffer around dams, retaining native vegetation, including reeds and rushes, assists in providing habitat for these species. To reduce the potential to spread the Chytrid disease, do not move frogs or tadpoles from one area to another.

Three species of reptile are listed, all skinks. Two are found within Tasmania, and one on a small offshore island. Habitat destruction is likely to be the major threat in conjunction with the impact of cattle and sheep.

Most of the waterways of the State have been stocked with exotic fish which are a direct threat through predation to the often tiny native fishes. Introduced fish (such as trout and carp) will eat the eggs and fry of native fish, compete for food and displace the native fish from their breeding habitat. Loss or degradation of habitat is also a major factor.