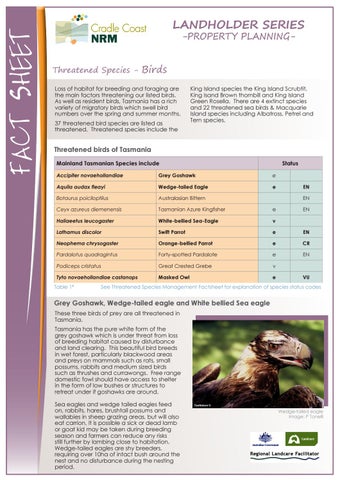 Loss of habitat for breeding and foraging are the main factors threatening our listed birds. As well as resident birds, Tasmania has a rich variety of migratory birds which swell bird numbers over the spring and summer months. 37 threatened bird species are listed as threatened. Threatened species include the

Grey Goshawk, Wedge-tailed eagle and White bellied Sea eagle These three birds of prey are all threatened in Tasmania. Tasmania has the pure white form of the grey goshawk which is under threat from loss of breeding habitat caused by disturbance and land clearing. This beautiful bird breeds in wet forest, particularly blackwood areas and preys on mammals such as rats, small possums, rabbits and medium sized birds such as thrushes and currawongs. Free range domestic fowl should have access to shelter in the form of low bushes or structures to retreat under if goshawks are around. Sea eagles and wedge tailed eagles feed on, rabbits, hares, brushtail possums and wallabies in sheep grazing areas, but will also eat carrion. It is possible a sick or dead lamb or goat kid may be taken during breeding season and farmers can reduce any risks still further by lambing close to habitation. Wedge-tailed eagles are shy breeders, requiring over 10ha of intact bush around the nest and no disturbance during the nesting period.

Orange-bellied Parrot and Swift parrot Both of these parrots are breeding endemics. They both migrate back from mainland Australia in spring to breed. Following breeding they will feed across their range before flying back to the mainland in autumn. While we can protect their breeding habitat here in Tasmania, loss of feeding habitat in mainland Australia is also impacting on their populations. With less than 200 individuals of the Orange bellied parrot remaining to breed on the West Coast, this species is one of the worlds most endangered bird species. Nesting in tall eucalypts adjacent to sedge and moorland, it feeds on seeds of several sedges and heath plants, including buttongrass. On its migration back to mainland it moves up the west coast, and across the Hunter Group and King Island feeding on beach front vegetation.

The swift parrot arrives from the mainland to Tasmania during August and nests in hollows in old eucalypts, mainly on the east coast. It has been impacted by loss of breeding habitat, as it relies on very old and dead standing trees in blue gum forests to provide the hollows for breeding. These trees are typically over a hundred years old before they provide the hollows required for breeding. In more recent years some birds have also been found to be breeding in some areas on the north west coast where large old blue gums can be found. They mainly feed on the nectar of flowering blue gum.

Masked Owl Like the endangered parrots, this species also relies on hollows for breeding, however as it requires very large hollows,loss of habitat containingvery old trees is again impacting on this large owl species. It mainly feeds on rodents, rabbits and small marsupials such as bandicoots and small possums. Another threat is the impact of some rat poisons on the species. Birds picking up sick or dead rodents that have been eating single dose rat poison can themselves be killed. People living adjacent to forest and woodlands should try to use trapping for rodent control and restrict the use of poisons.