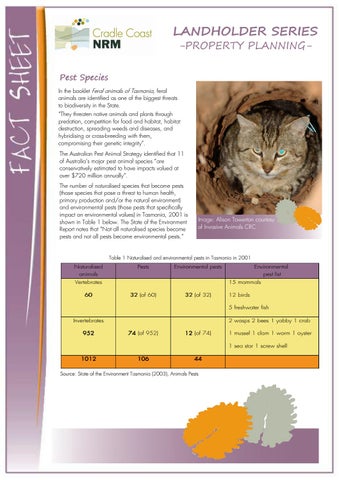 LANDHOLDER SERIES -PROPERTY PLANNINGPest Species In the booklet Feral animals of Tasmania, feral animals are identified as one of the biggest threats to biodiversity in the State. “They threaten native animals and plants through predation, competition for food and habitat, habitat destruction, spreading weeds and diseases, and hybridising or cross-breeding with them, compromising their genetic integrity”. The Australian Pest Animal Strategy identified that 11 of Australia’s major pest animal species “are conservatively estimated to have impacts valued at over $720 million annually”. The number of naturalised species that become pests (those species that pose a threat to human health, primary production and/or the natural environment) and environmental pests (those pests that specifically impact on environmental values) in Tasmania, 2001 is shown in Table 1 below. The State of the Environment Report notes that “Not all naturalised species become pests and not all pests become environmental pests.”

Table 1 Naturalised and environmental pests in Tasmania in 2001

Predation of native mammals and ground nesting birds. Many marsupials are already extinct due to fox predation on mainland Australia. The economic losses of livestock from fox attacks could equate as a much as $34.5 million per annum in Tasmania's sheep industry alone (wool and slaughter). Prey upon native mammals, birds, reptiles (particularly skinks), frogs, fish and invertebrates. Economic losses of livestock through disease. Prey upon native birds, reptiles (e.g. skinks) and invertebrates. They have the potential to i ntroduce disease. They have particularly devastating impacts on smaller sea bird populations (e.g. fairy prions and diving petrels) as they predate on the eggs, babies and adults. Ferrets are very successful predators. They prey on for example ground nesting and burrowing birds and native mammals. They also have the potential to introduce disease. Over-grazing, changes to vegetation structure, habitat losses to flora and fauna, soil erosion from burrows. Occupy and degrade nesting hollows needed for breeding of native birds, such as the already threatened orange-bellied parrot. Prey upon many native invertebrates with as yet unstudied consequences.

Pest Species Cat Felis catus Cats are known to prey on at least 50 Tasmanian species including 15 threatened species. The cat competes directly with native carnivores and impacts on wildlife through predation, competition and disease. It is believed that the population is rising in response to the decline in population of the Tasmanian devil through the Facial Tumour Disease. New legislation came into effect on July 1st 2012 which permits only registered breeders to breed cats. “Cats sold or given away must be more than eight weeks old, desexed and microchipped. The Act also introduces powers to trap, seize or humanely destroy stray and feral cats in certain circumstances and gives land owners and managers the statutory power to control cats found on their land”. Toxoplasmosis is carried by cats and can infect humans, livestock and wildlife. Symptoms may include abortion and neurological signs. Marsupials are particularly susceptible to infection and there are increasing reports of “dopey” and/or blind wallabies and bandicoots along the northwest Coast and the disease toxoplasmosis has been confirmed at autopsy.

Feral cat. Image: Darren Marshall courtesy of the Invasive Animals CRC The community can assist by preferably having indoor cats or providing cat enclosures to reduce their impact on the local wildlife. Further details can be found in the invasive species section of Department of Primary Industries, Parks, Water & Environment website www.dpiw.tas.gov.au or contact your local council.

LANDHOLDER SERIES -PROPERTY PLANNINGPest Species Rabbit Oryctolagus cuniculus With the ability for a pair of rabbits to produce 30-40 offspring in a year, the population of rabbits can increase rapidly when conditions are right. On farms they compete with livestock for pasture (8 rabbits can eat the equivalent pasture of 1 sheep), impact on native vegetation and can change the composition of the vegetation communities. At high levels they can eat the grass down to bare soil, leaving it open to erosion and weed infestation.

Control measures for rabbits should aim to reduce the resident population by more than 90% otherwise, with the rabbits breeding rate, the population will return to pre-control levels within one breeding season. Usually several methods are required to make an impact on the population. Where numbers are excessive and causing significant impact, DPIPWE may assist by releasing the Rabbit Calicivirus Disease in the area or advising on poison options.

High population levels also result in a rise in predator numbers which allows populations of species such as the feral cat to increase with a flow on effect on wildlife from higher predation levels and spread of disease.

Starling Sturnus vulgaris Released in the 1880s to control insect pests eating European and pasture plants, the starling is now so common in Tasmania it is hardly noticed any more. It will compete with native birds for food, will destroy habitat and competes with native hollow dependent fauna for nest sites. It is known to â&#x20AC;&#x153;directly impact on orange-bellied parrots by using tree-hollow nest sites and by killing incubating females at nestâ&#x20AC;? (State of the Environment Tasmania 2009). Some reduction in breeding can be obtained by reducing available nesting sites, ensuring that the sites are not being used by native species. Sites as varied as roof spaces, protected areas in wood piles, old guttering and pipes, as well as nesting boxes put up for native fauna, are used by these birds.

Ferret Mustela furo (Polecat) The ferret is another species to be alert for - a few small populations are known in Tasmania. It is a ferocious hunter of anything small enough to tackle (small ground-dwelling birds, reptiles, amphibians, mammals and invertebrates).

Yabbies Cherax destructor Hardy and quick maturing, the yabby will start breeding from 6months of age (compared to 14 years for female giant freshwater lobster) and can spawn 2-4 times a year (every 2 years for giant freshwater lobster). Tolerant of higher temperatures and able to burrow to survive drought, this species will outcompete native species, displacing endangered burrowing crayfish, reducing water quality, encouraging algae blooms, eroding stream banks and damaging dam walls. It may also carry diseases and parasites to which our native species have no resistance. Mainly found in farm dams at present, the Inland Fisheries Service needs community support to eradicate this species before it invades all our natural waterways.

LANDHOLDER SERIES -PROPERTY PLANNINGPest Species European Red Fox Vulpes vulpes (Red fox) There has been a scattered history of foxes in Tasmania. In 1864 one was imported specifically for a fox hunt and was killed at Oatlands. In1972 a young female was trapped near Launceston. The source of this animal is unknown, although there are some indications it may have been a pet (The Fox in Tasmania - Parks & Wildlife Service Fact sheet). A fox was shot in the Symmons Plains area in 2001 and was found to be a young male with stomach contents being identified as Tasmanian native fauna. In 2006 a fox carcass, a result of roadkill, was discovered at Lillico Beach. A fox was also seen escaping from a container ship in Burnie in 1998 but was never located although footprints discovered on a nearby beach were confirmed as those of a fox. It is thought that in the past higher use of 1080 poison, of which foxes are highly sensitive, have prevented fox populations establishing, however with its use now reduced, there is a much higher threat of foxes becoming established. The impact on the Tasmanian environment would be devastating. Many of the small marsupials that have disappeared from mainland Australia (largely due to predation by foxes) have survived here to date.

Introduced wasps Vespula germanica (European wasp); Vespula vulgaris (English, common wasp, yellow jacket) Accidental introduction, probably of hibernating queens to Tasmania in 1959 for the European wasp and 1995 for the English wasp. These species can cause major economic losses in vineyards and orchards, and will also actively hunt invertebrates. They are thought to be implicated in the decline of the Ptunnara brown butterfly found in native grasslands. They are known to rob beehives, kill bees, fledgling birds and will compete with native birds and bees for nectar. With a painful sting, which can cause allergic reactions in some, the wasps can deter people from enjoying outdoor activities where they are at high densities.

Some 78 species of native vertebrates (birds, mammals, frogs and reptiles) would be at risk, not to mention the impact this species would have on farming. In some areas of Victoria foxes kill 30% of lambs, costing that State around $40 million per year in lost revenue and control. They also kill chooks, ducks, geese, goat kids and fawns and will occasionally attack calves.

The fox evidence collected in Tasmania indicates there is a small number of foxes present in the state which may have the opportunity to form a breeding population and fully establish in Tasmania. To prevent this from occurring it is imperative that the community support the efforts of the Department of Primary Industries Parks Water and Environment’s (DPIPWE) Fox Eradication Program. You can also refer to the website www.dpipwe.tas.gov.au/invasivespecies, ‘like’ them on Facebook ‘Tasmanian Invasive Species’ or contact the 24hr confidential hotline number 1300 369 688 (1300 FOX OUT) to report fox sightings. The PestSmart Toolkits (collection of factsheets, case studies etc) are also freely available online, particularly the Fox and Rabbit Toolkits, eg. "Foxes in Tasmania" factsheet http://www.feral.org.au/pestsmart/

Pest Species Bennetts wallaby Macropus rufogriseus rufogriseus Pademelon Thylogale billardierii Brushtail possum Trichosurus vulpecula fuliginosus The pademelon and Bennetts wallaby (and brushtail possum in some areas) are abundant in Tasmania and their numbers and distribution have expanded over the past 30 years. Land clearance in conjunction with improved pastures and water supply, along with reduced hunting pressure, have provided ideal conditions for increasing populations of these species. Land clearance has resulted in a mosaic of pastures and remnant bushland which has provided ideal habitat enabling wallabies to feed at night on improved pasture and retreat to adjacent bushland to shelter by day. Studies have shown an average of 65% of pasture production is lost from rested paddocks near bushland (and within 20 metres of bush, up to 90% of pasture production can be lost) to wildlife browsing. If the landholder believes that there is a problem with wildlife browsing, this can be quantified by measuring pasture loss using exclusion cages as outlined in the Measuring Pasture Loss to Browsing Animals sheet (See References). If the losses are confirmed there are a few options to reduce the problem. Wallaby-proof fencing has been shown to be one of the most successful methods to control browsing, however this is expensive and should be planned in conjunction with neighbouring properties so that the problem isn’t merely shifted or populations isolated. Reducing the population before fencing remnant bush can avoid high-density wallaby populations impacting on the understory.

A permit is required to “take” (which covers to kill, injure, catch, damage, destroy or collect) wallabies and brushtail possums, which are classified as “Partly Protected Wildlife” under the Wildlife Regulations 1999 of the Nature Conservation Act 2002. Game Management Services Unit (See References) will assist in developing a Property-based wildlife Management Plan with control options which, as well as fencing, may include poisoning, trapping or shooting.

Pest Species References Traveller's Guide to Tasmanian Quarantine - What You Can and Can't Bring into Tasmania http://www.dpiw.tas.gov.au/inter/nsf/WebPages/EGIL-56FW46?open

Living with Kangaroos and Wallabies http://www.dpiw.tas.gov.au/inter.nsf/webpages/sjon-52f92e?open