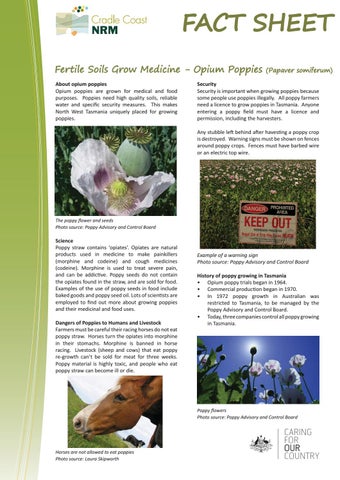 Security Security is important when growing poppies because some people use poppies illegally. All poppy farmers need a licence to grow poppies in Tasmania. Anyone entering a poppy field must have a licence and permission, including the harvesters. Any stubble left behind after havesting a poppy crop is destroyed. Warning signs must be shown on fences around poppy crops. Fences must have barbed wire or an electric top wire.

The poppy flower and seeds Photo source: Poppy Advisory and Control Board

Science Poppy straw contains ‘opiates’. Opiates are natural products used in medicine to make painkillers (morphine and codeine) and cough medicines (codeine). Morphine is used to treat severe pain, and can be addictive. Poppy seeds do not contain the opiates found in the straw, and are sold for food. Examples of the use of poppy seeds in food include baked goods and poppy seed oil. Lots of scientists are employed to find out more about growing poppies and their medicinal and food uses. Dangers of Poppies to Humans and Livestock Farmers must be careful their racing horses do not eat poppy straw. Horses turn the opiates into morphine in their stomachs. Morphine is banned in horse racing. Livestock (sheep and cows) that eat poppy re-growth can’t be sold for meat for three weeks. Poppy material is highly toxic, and people who eat poppy straw can become ill or die.

Facts • Tasmania supplies half the world’s medicinal opiates • Poppies are grown in a 3 year cycle with other crops • 1,000 farmers are contracted to grow poppies in Tasmania • More than 13,000 ha of poppies are grown each year in Tasmania Early trials of poppy growing looked at weed competition, herbicides (weed killers), nutrition, irrigation, ideal times for sowing, and harvesting. This has lead to Tasmania’s poppy industry having the world’s most eﬃcient and highest yielding crops per hectare.

A poppy field in Tasmania Photo source: Poppy Advisory and Control Board

Growing Poppies in Tasmania • Farmers must be licensed with the Tasmanian Government, and registered with a company to grow poppies. • Sowing is from early winter to spring (June to November) • Harvesting is mid to late summer (December to March) • Poppy straw contains natural opiates used for medicine • Poppy seeds are cleaned, graded and bagged for export, and sale around Australia. Ideally, as poppy crops should not be grown in the same field in consecutive seasons, they suit farmers who mix cropping and livestock farming.