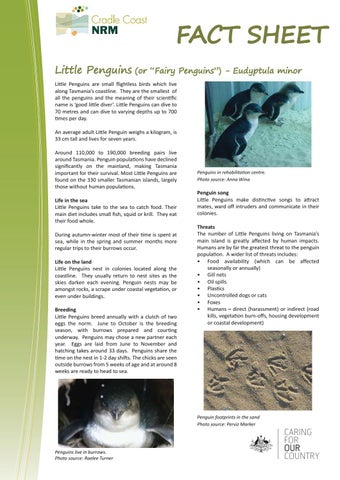 Little Penguins are small flightless birds which live along Tasmania’s coastline. They are the smallest of all the penguins and the meaning of their scientific name is ‘good little diver’. Little Penguins can dive to 70 metres and can dive to varying depths up to 700 times per day. An average adult Little Penguin weighs a kilogram, is 33 cm tall and lives for seven years. Around 110,000 to 190,000 breeding pairs live around Tasmania. Penguin populations have declined significantly on the mainland, making Tasmania important for their survival. Most Little Penguins are found on the 330 smaller Tasmanian islands, largely those without human populations. Life in the sea Little Penguins take to the sea to catch food. Their main diet includes small fish, squid or krill. They eat their food whole. During autumn-winter most of their time is spent at sea, while in the spring and summer months more regular trips to their burrows occur. Life on the land Little Penguins nest in colonies located along the coastline. They usually return to nest sites as the skies darken each evening. Penguin nests may be amongst rocks, a scrape under coastal vegetation, or even under buildings. Breeding Little Penguins breed annually with a clutch of two eggs the norm. June to October is the breeding season, with burrows prepared and courting underway. Penguins may chose a new partner each year. Eggs are laid from June to November and hatching takes around 33 days. Penguins share the time on the nest in 1-2 day shifts. The chicks are seen outside burrows from 5 weeks of age and at around 8 weeks are ready to head to sea.

What can I do to help Little Penguins? • Join a Friends of Penguins group in Burnie or Lillico to protect their habitat, and become a volunteer guide • Keep your dog on a leash. • Desex cats and keep them indoors at night. • View penguins at a designated viewing centre at Burnie or Lillico with the volunteer guides. • Don’t trample penguin homes - stick to the walking tracks. • Don’t remove coastal vegetation - penguins may be nesting there.