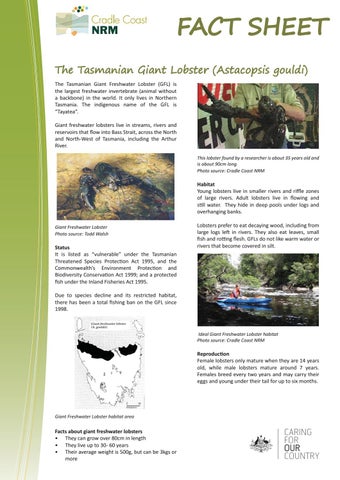 Giant freshwater lobsters live in streams, rivers and reservoirs that flow into Bass Strait, across the North and North-West of Tasmania, including the Arthur River. This lobster found by a researcher is about 35 years old and is about 90cm long. Photo source: Cradle Coast NRM

Status It is listed as “vulnerable” under the Tasmanian Threatened Species Protection Act 1995, and the Commonwealth’s Environment Protection and Biodiversity Conservation Act 1999; and a protected fish under the Inland Fisheries Act 1995.

Lobsters prefer to eat decaying wood, including from large logs left in rivers. They also eat leaves, small fish and rotting flesh. GFLs do not like warm water or rivers that become covered in silt.

Due to species decline and its restricted habitat, there has been a total fishing ban on the GFL since 1998.

Reproduction Female lobsters only mature when they are 14 years old, while male lobsters mature around 7 years. Females breed every two years and may carry their eggs and young under their tail for up to six months.

Facts about giant freshwater lobsters • They can grow over 80cm in length • They live up to 30- 60 years • Their average weight is 500g, but can be 3kgs or more

FACT SHEET The Tasmanian Giant Lobster (Astacopsis gouldi) What are researchers and scientists doing? Scientists are studying the biology and monitoring the population trends of GFL to help us understand them. This will enable us to establish more habitat for the GFL, and help us to conserve them in the wild.

Threats to Giant Freshwater Lobsters Habitat disturbance for agricultural, urban and forestry land uses; and resulting impacts including: • Siltation (pollution of water by fine particles like silt or clay) of streams from soil erosion • Water contamination by mud and silt in the water. This leads to increased water temperature, and potential suﬀocation of GFL, by reducing the level of oxygen in the water. • Vegetation removal contributes to soil erosion and increased sediments in waterways. It also leads to less native plant leaf matter in the waterways - which is a source of food for GFL; • Input of chemicals, nutrients and pesticides into waterways from land use; • Barriers to movement of both the GFL and water within rivers and streams, can lead to lobsters being restricted to areas with limited food sources, decreased water quality, water flow, and oxygen in the water; • Stock access to streams can lead to additional mud into the waterways, leading to potential suﬀocation of GFL; and • Changed water flows. Illegal fishing is also a significant threat to GFLs.

There is a National Recovery Plan 2006 - 2010 for the GFL to ensure its long-term survival, through awareness raising, habitat protection and rehabilitation. By managing Giant Freshwater Lobster habitat for the benefit of GFL, many other native aquatic species and river ecosystems will also benefit.