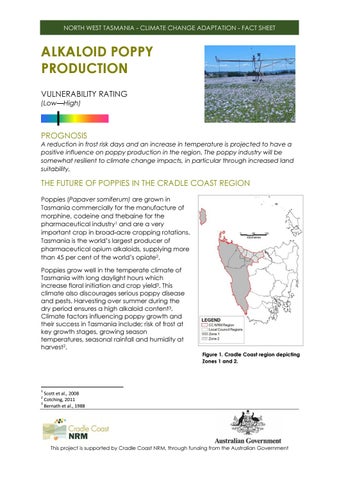 PROGNOSIS A reduction in frost risk days and an increase in temperature is projected to have a positive influence on poppy production in the region. The poppy industry will be somewhat resilient to climate change impacts, in particular through increased land suitability.

THE FUTURE OF POPPIES IN THE CRADLE COAST REGION Poppies (Papaver somiferum) are grown in Tasmania commercially for the manufacture of morphine, codeine and thebaine for the pharmaceutical industry1 and are a very important crop in broad-acre cropping rotations. Tasmania is the world’s largest producer of pharmaceutical opium alkaloids, supplying more than 45 per cent of the world’s opiate2. Poppies grow well in the temperate climate of Tasmania with long daylight hours which increase floral initiation and crop yield3. This climate also discourages serious poppy disease and pests. Harvesting over summer during the dry period ensures a high alkaloid content3. Climate factors influencing poppy growth and their success in Tasmania include; risk of frost at key growth stages, growing season temperatures, seasonal rainfall and humidity at harvest2. Figure 1. Cradle Coast region depicting Zones 1 and 2.

NORTH WEST TASMANIA - CLIMATE CHANGE ADAPTATION - FACT SHEET The entire Cradle Coast NRM region is projected to have an increase in temperature of 2.6 to 3.3°C, which is similar to the rest of the state4. Ideal growing conditions for poppies occur when daily maximum temperatures are between 20°C and 23°C. The expected daily temperature increase expected across the state will facilitate new opportunities for poppy growers with longer days and higher temperatures not only accelerating development of Papaver somniferum but also the amount of total alkaloids accumulated in capsules3. Changes in rainfall, however, will vary across the region (Figure 1.). In zone 1 rainfall is expected to increase up to 20% in winter and spring and decrease by 10-20% during summer and autumn. In zone 2 there will be an increase in summer and winter rainfall by up to 10% and a slight decrease in the spring, however, little change is expected during autumn1. These changes in rainfall are expected to generate more intense downpours along with longer dry periods1 which could have impacts on the poppy industry including increased risk of disease. The increase in summer rain projected in zone 2 could present harvesting challenges if rain occurs late in the summer. In zone 1 an increase in spring rainfall could have implications for sowing while the projected decrease in summer rain will increase the need for irrigation resources.

Figure 2. Changes in frost incidence under the A2 emissions scenario.(a) and (b) days with less than 2°C per year (c) and (d)

Frost can be detrimental to poppy farming, especially during key phases. Cotching (2011) states that frost during the late hook stage (approximately 1-15 November) and at flowering a month after, can have impacts on the poppy yield and quality. During the critical growth stages, hard frosts, which occur below -2°C, are more detrimental to the crop than light frosts, which occur at less than 2°C. Frost incidence is expected to decrease under the Climate Futures A2 scenario for the poppy growing region of the NW, although damaging spring frosts may still occur4 (Figure 2).

ADAPTATION OPTIONS FOR POPPY PRODUCTION Under a changing climate, a reduction in frost risk days and an increase in temperature across the poppy growing region in the North West, will enhance conditions for poppy production. Rainfall changes, however, may make poppy 4

A reduction in frost risk days and an increase in temperature is projected to have a positive influence on poppy production in the region. T...

A reduction in frost risk days and an increase in temperature is projected to have a positive influence on poppy production in the region. T...