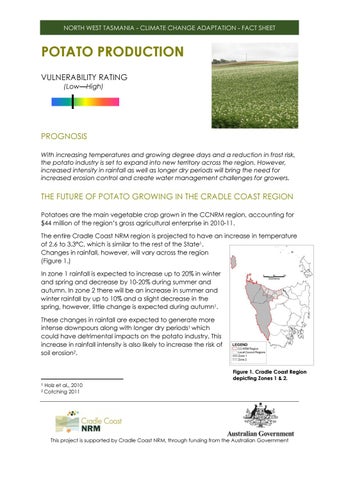 PROGNOSIS With increasing temperatures and growing degree days and a reduction in frost risk, the potato industry is set to expand into new territory across the region. However, increased intensity in rainfall as well as longer dry periods will bring the need for increased erosion control and create water management challenges for growers.

THE FUTURE OF POTATO GROWING IN THE CRADLE COAST REGION Potatoes are the main vegetable crop grown in the CCNRM region, accounting for $44 million of the region’s gross agricultural enterprise in 2010-11. The entire Cradle Coast NRM region is projected to have an increase in temperature of 2.6 to 3.3°C, which is similar to the rest of the State1. Changes in rainfall, however, will vary across the region (Figure 1.) In zone 1 rainfall is expected to increase up to 20% in winter and spring and decrease by 10-20% during summer and autumn. In zone 2 there will be an increase in summer and winter rainfall by up to 10% and a slight decrease in the spring, however, little change is expected during autumn1. These changes in rainfall are expected to generate more intense downpours along with longer dry periods1 which could have detrimental impacts on the potato industry. This increase in rainfall intensity is also likely to increase the risk of soil erosion2. Figure 1. Cradle Coast Region depicting Zones 1 & 2. 1

NORTH WEST TASMANIA - CLIMATE CHANGE ADAPTATION - FACT SHEET Potatoes grown for processing and seed require more than 130 and 90 frost free day’s respectively2. Frost risk days are projected to decrease significantly across the entire region1 (Figure 2). Potatoes also need more than 1125 growing degree days (a measure of the heat to grow and ripen crops1) and require overnight temperatures to drop below 20°C for at least 4 hours each night2. The number of tropical nights (where the minimum temperature is greater than 20°C) is projected to increase by 6 nights per year in the Smithton and Latrobe areas by 2085 which may have an impact on growing locations. Growing degree days are also expected to increase across the region1 (Figure 3).

⇒ Managing soil erosion risk through landscaping including the use of cereal straw on rip lines. ⇒

⇒ Exploring potential for land use change, particularly in regions currently limited by temperature and to combat an increase in tropical nights. ⇒

Awareness of and monitoring for pests and disease.

With increasing temperatures and growing degree days and a reduction in frost risk, the potato industry is set to expand into new territory...

With increasing temperatures and growing degree days and a reduction in frost risk, the potato industry is set to expand into new territory...