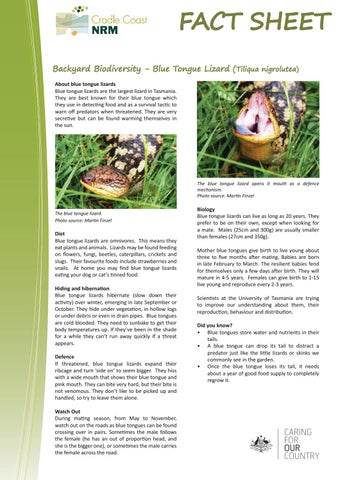 FACT SHEET Backyard Biodiversity - Blue Tongue Lizard (Tiliqua nigrolutea) About blue tongue lizards Blue tongue lizards are the largest lizard in Tasmania. They are best known for their blue tongue which they use in detecting food and as a survival tactic to warn oﬀ predators when threatened. They are very secretive but can be found warming themselves in the sun.

Diet Blue tongue lizards are omnivores. This means they eat plants and animals. Lizards may be found feeding on flowers, fungi, beetles, caterpillars, crickets and slugs. Their favourite foods include strawberries and snails. At home you may find blue tongue lizards eating your dog or cat’s tinned food. Hiding and hibernation Blue tongue lizards hibernate (slow down their activity) over winter, emerging in late September or October. They hide under vegetation, in hollow logs or under debris or even in drain pipes. Blue tongues are cold blooded. They need to sunbake to get their body temperatures up. If they’ve been in the shade for a while they can’t run away quickly if a threat appears. Defence If threatened, blue tongue lizards expand their ribcage and turn ‘side on’ to seem bigger. They hiss with a wide mouth that shows their blue tongue and pink mouth. They can bite very hard, but their bite is not venomous. They don’t like to be picked up and handled, so try to leave them alone. Watch Out During mating season, from May to November, watch out on the roads as blue tongues can be found crossing over in pairs. Sometimes the male follows the female (he has an out of proportion head, and she is the bigger one), or sometimes the male carries the female across the road.

Biology Blue tongue lizards can live as long as 20 years. They prefer to be on their own, except when looking for a mate. Males (25cm and 300g) are usually smaller than females (27cm and 350g). Mother blue tongues give birth to live young about three to five months after mating. Babies are born in late February to March. The resilient babies fend for themselves only a few days after birth. They will mature in 4-5 years. Females can give birth to 1-15 live young and reproduce every 2-3 years. Scientists at the University of Tasmania are trying to improve our understanding about them, their reproduction, behaviour and distribution. Did you know? • Blue tongues store water and nutrients in their tails. • A blue tongue can drop its tail to distract a predator just like the little lizards or skinks we commonly see in the garden. • Once the blue tongue loses its tail, it needs about a year of good food supply to completely regrow it.

FACT SHEET Backyard Biodiversity - Blue Tongue Lizard (Tiliqua nigrolutea) Threats The biggest threat to blue tongue lizards is habitat loss - mainly due to clearance for development. Other threats to blue tongue lizards include: • Cars - which may run over them. • lawn mowers - lizards tend to hide in long grass. • Dogs and cats - may frighten or attack lizards. • Snail or slug bait - lizards that eat snails or slugs that have eaten bait may die. • Drowning - in swimming pools or ponds.

Tips to relocating blue tongue lizards If you need to move a blue tongue out of the way, gently wrap a towel around it or sweep it into a box and move it to a safer space. Blue tongues aren’t dangerous, but they can latch onto your finger and refuse to let go if they aren’t happy. Further information Backyard Buddies www.backyardbuddies.net.au Department of Primary Industries, Parks, Water and Environment www.dpiw.tas.gov.au > Native Plants and Animals > Animals of Tasmania > Reptiles and Frogs > Lizards of Tasmania

How to make a blue tongue lizard friendly garden • Place some rocks and logs on the ground for lizard shelter. • Leave a pile of leaves in a sheltered spot, as leaf litter provides shelter and food for insects that blue tongues like to eat. • Mulch gardens and plant local native ground covers and shrubs • Grow strawberries – if you are happy to share them with the blue tongues! • Instead of using snail baits, you can use crushed egg shells, coﬀee grounds or saw dust to deter snails from your vegetable garden.