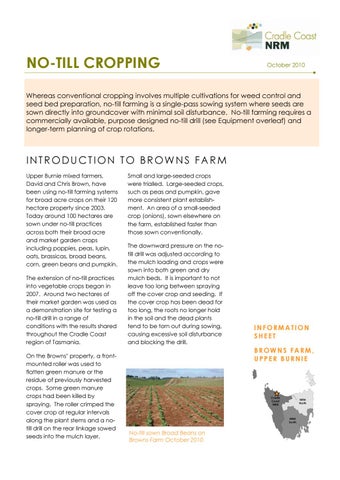 INTRODUCTION TO BROWNS FARM Upper Burnie mixed farmers, David and Chris Brown, have been using no-till farming systems for broad acre crops on their 120 hectare property since 2003. Today around 100 hectares are sown under no-till practices across both their broad acre and market garden crops including poppies, peas, lupin, oats, brassicas, broad beans, corn, green beans and pumpkin. The extension of no-till practices into vegetable crops began in 2007. Around two hectares of their market garden was used as a demonstration site for testing a no-till drill in a range of conditions with the results shared throughout the Cradle Coast region of Tasmania. On the Brownsâ&#x20AC;&#x2122; property, a frontmounted roller was used to flatten green manure or the residue of previously harvested crops. Some green manure crops had been killed by spraying. The roller crimped the cover crop at regular intervals along the plant stems and a notill drill on the rear linkage sowed seeds into the mulch layer.

Small and large-seeded crops were trialled. Large-seeded crops, such as peas and pumpkin, gave more consistent plant establishment. An area of a small-seeded crop (onions), sown elsewhere on the farm, established faster than those sown conventionally. The downward pressure on the notill drill was adjusted according to the mulch loading and crops were sown into both green and dry mulch beds. It is important to not leave too long between spraying off the cover crop and seeding. If the cover crop has been dead for too long, the roots no longer hold in the soil and the dead plants tend to be torn out during sowing, causing excessive soil disturbance and blocking the drill.

BENEFITS The benefits of no-till vegetable cropping were evident from the start for the Browns and this led to the five-fold expansion of their demonstration area. No-till farming is the dominant cropping practice on their property today. Key benefits for the Browns included:

Improved soil structure leading to improved water infiltration and retention. This benefit was influenced by the reduction in machinery soil compaction, the presence of the mulch layer and the subsequent reduction in evaporation compared to traditional cultivation methods

On par, or better, crop yields.

LESSONS LEARNT “..one of the significant differences compared to conventional cropping is the extra attention required for crop rotation planning…”

An important component of the Browns decision to host the no-till demonstration was the opportunity to share their experiences with others in the Cradle Coast region. Whilst there haven’t been major developments in no-till technology since the Browns began trials in 2003, their knowledge and understanding of no-till systems has grown considerably. One of the significant differences compared to conventional cropping methods is extra attention required for crop rotation planning – both in the sequence of crops and the timing of plantings between old (mulch) crops and new crops. The time allocated to no till cropping was still less than conventional methods when considering the balance between increases in planning time and reductions in tractor time. Another benefit observed relates to water use. A pea crop sown into a sprayed out oats cover crop required less irrigation compared to a pea crop sown at the same time after a

potato harvest, which required full cultivation of the seedbed. Effective slug control is another important consideration in no-till farming, as slugs can be a major issue. The increase in organic matter provides a ready food source and the lack of habitat disturbance through tillage allows their numbers to increase. The Browns use slug baiting and also factor in a margin of crop loss when planning; they’re also mindful of minimising stubble loads in cover crops so as to discourage slugfriendly environments. Experimentation was key to the Browns’ success, and starting on a trial paddock proved an effective way of gaining experience to extend the practice across their farm. Although some field officers were reluctant to encourage the transformation, the Browns found sufficient local knowledge and support to pursue the benefits of no -till farming.

NO-TILL CROPPING EQUIPMENT The key difference in conventional versus no-till seeding equipment is the soil opener technology. The Browns use an Accord Optima No-Till Drill which has a double cutting disk to create a small opening in the soil before seed placement. Closure of the seed row is done with twin-inclined press wheels. Tension springs on the unit can increase or decrease the pressure of the cutting disks to cater for difference mulch densities. A roller fitted to the front of the tractor was used where mulch was particularly dense or spraying was not used (e.g. crops with succulent

stems, such as lupins). Individual farm preferences for cover crops, seed types and herbicide use determine the requirement for a front linkage roller. In addition to a roller, or as a substitute, spraying equipment may also be used to prepare cover crops for no-till sowing. In the Browns’ experience, all cropping soils are suited to no-till farming. If soil compaction is a common occurrence on a property, a combination of no till and controlled traffic farming practises should be employed.

PROJECT HISTORY In 2007, the Australian Governmentâ&#x20AC;&#x2122;s National Landcare Program funded the project Incorporating Controlled Traffic and No-Till into Intensive Cropping Systems in North West Tasmania. The project was hosted by Cradle Coast Natural Resource Management (NRM) and managed by the Tasmanian Department of Primary Industries and Water (DPIW) and the Tasmanian Institute of Agricultural Research (TIAR). Controlled Traffic Farming elements of the project continue in 2010 and no-till operations have been widely adopted on a demonstration farm in Upper Burnie, North West Tasmania. The contents of this information sheet are based on the no-till farm experience and have been collated with thanks to John McPhee (TIAR) and no-till farmers, David and Chris Brown.