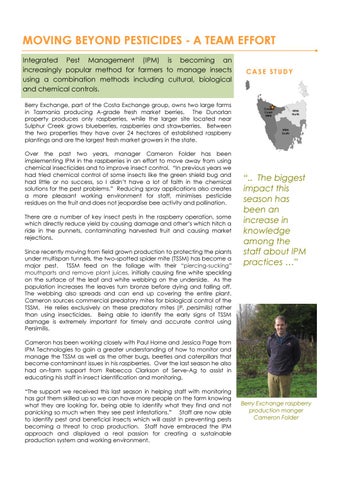 Berry Exchange, part of the Costa Exchange group, owns two large farms in Tasmania producing A-grade fresh market berries. The Dunorlan property produces only raspberries, while the larger site located near Sulphur Creek grows blueberries, raspberries and strawberries. Between the two properties they have over 24 hectares of established raspberry plantings and are the largest fresh market growers in the state. Over the past two years, manager Cameron Folder has been implementing IPM in the raspberries in an effort to move away from using chemical insecticides and to improve insect control. “In previous years we had tried chemical control of some insects like the green shield bug and had little or no success, so I didn’t have a lot of faith in the chemical solutions for the pest problems.” Reducing spray applications also creates a more pleasant working environment for staff, minimises pesticide residues on the fruit and does not jeopardise bee activity and pollination. There are a number of key insect pests in the raspberry operation, some which directly reduce yield by causing damage and other’s which hitch a ride in the punnets, contaminating harvested fruit and causing market rejections. Since recently moving from field grown production to protecting the plants under multispan tunnels, the two-spotted spider mite (TSSM) has become a major pest. TSSM feed on the foliage with their “piercing-sucking” mouthparts and remove plant juices, initially causing fine white speckling on the surface of the leaf and white webbing on the underside. As the population increases the leaves turn bronze before dying and falling off. The webbing also spreads and can end up covering the entire plant. Cameron sources commercial predatory mites for biological control of the TSSM. He relies exclusively on these predatory mites (P. persimilis) rather than using insecticides. Being able to identify the early signs of TSSM damage is extremely important for timely and accurate control using Persimilis.

“.. The biggest impact this season has been an increase in knowledge among the staff about IPM practices …”

Cameron has been working closely with Paul Horne and Jessica Page from IPM Technologies to gain a greater understanding of how to monitor and manage the TSSM as well as the other bugs, beetles and caterpillars that become contaminant issues in his raspberries. Over the last season he also had on-farm support from Rebecca Clarkson of Serve-Ag to assist in educating his staff in insect identification and monitoring. “The support we received this last season in helping staff with monitoring has got them skilled up so we can have more people on the farm knowing what they are looking for, being able to identify what they find and not panicking so much when they see pest infestations.” Staff are now able to identify pest and beneficial insects which will assist in preventing pests becoming a threat to crop production. Staff have embraced the IPM approach and displayed a real passion for creating a sustainable production system and working environment.

WHA T’S BEEN ACHIEVED? IPM has had a large impact on the raspberry management at Berry Exchange. “Since we started using an IPM program we have reduced the use of some chemicals and there are some that we are no longer using at all. We’re also probably using less Persimilis than what we were a year ago and we’ve altered their application times… The biggest impact this season has been an increase in knowledge among the staff about Above: Severe webbing by TSSM IPM practices as well insect monitoring and identification skills.” Below: Example contaminant pests This past season there were some substantial TSSM outbreaks at the Dunorlan property. Through improved monitoring by staff, the later harvested crop at Sulphur Creek avoided any outbreaks as a result of early detection and more precise Persimilis releases.

W H O WA S I N V O L V E D ? In 2010, an introductory IPM workshop series was funded by the Australian Government’s Caring for our Country program and hosted by Cradle Coast NRM. The project was organised by Serve-Ag and delivered by Dr. Paul Horne and Jessica Page of IPM Technologies. The following year the program provided funding to support three farmers to implement IPM on their properties. Cameron applied to be involved and through this project received expert advice and support from IPM technologies as well as local support and monitoring assistance from Rebecca Clarkson (Serve-Ag).

WHA T’S NEXT? Berry Exchange intends to continue using IPM in the future and Cameron says that “they will just keep getting better at it. The experience over the past season has been valuable for gaining insect identification skills but I don’t think we’ve quite got it all worked out yet.” They will continue to fine tune their IPM program as well as the monitoring and identification skills of staff.

WA N T T O K N O W M O R E ? Further information on project activities can be obtained from Cradle Coast NRM, Serve-Ag or IPM Technologies. To learn more about IPM and how you could implement IPM on your property, visit the IPM Technologies website (www.ipmtechnologies.com.au) or refer to the following books authored by Paul Horne and Jessica Page: Integrated Pest Management for Crops and Pastures (2008) and Controlling Invertebrate Pests in Agriculture (2012).

REGIONAL NRM STRATEGY This case study relates to the following Cradle Coast NRM program outcome: The knowledge gained and changes implemented by farmers through the IPM project ensures the proper and appropriate application of insecticides protecting biological diversity for healthy, productive landscapes in the region. The Cradle Coast regional NRM strategy can be found online at www.cradlecoastnrm.com

Moving Beyond Pesticides - A Team Effort

Moving Beyond Pesticides - A Team Effort