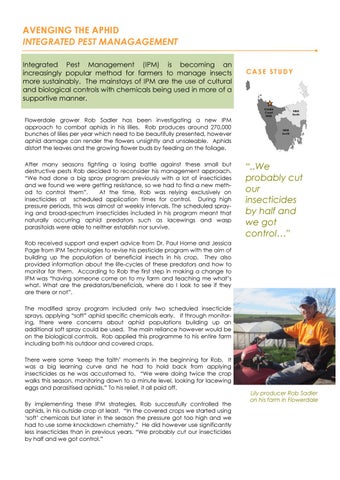 AVENGING THE APHID INTEGRATED PEST MANAGAGEMENT Integrated Pest Management (IPM) is becoming an increasingly popular method for farmers to manage insects more sustainably. The mainstays of IPM are the use of cultural and biological controls with chemicals being used in more of a supportive manner.

Flowerdale grower Rob Sadler has been investigating a new IPM approach to combat aphids in his lilies. Rob produces around 270,000 bunches of lilies per year which need to be beautifully presented, however aphid damage can render the flowers unsightly and unsaleable. Aphids distort the leaves and the growing flower buds by feeding on the foliage. After many seasons fighting a losing battle against these small but destructive pests Rob decided to reconsider his management approach. “We had done a big spray program previously with a lot of insecticides and we found we were getting resistance, so we had to find a new method to control them”. At the time, Rob was relying exclusively on insecticides at scheduled application times for control. During high pressure periods, this was almost at weekly intervals. The scheduled spraying and broad-spectrum insecticides included in his program meant that naturally occurring aphid predators such as lacewings and wasp parasitoids were able to neither establish nor survive.

“..We probably cut our insecticides by half and we got control…”

Rob received support and expert advice from Dr. Paul Horne and Jessica Page from IPM Technologies to revise his pesticide program with the aim of building up the population of beneficial insects in his crop. They also provided information about the life-cycles of these predators and how to monitor for them. According to Rob the first step in making a change to IPM was “having someone come on to my farm and teaching me what’s what. What are the predators/beneficials, where do I look to see if they are there or not”. The modified spray program included only two scheduled insecticide sprays, applying “soft” aphid specific chemicals early. If through monitoring, there were concerns about aphid populations building up an additional soft spray could be used. The main reliance however would be on the biological controls. Rob applied this programme to his entire farm including both his outdoor and covered crops. There were some ‘keep the faith’ moments in the beginning for Rob. It was a big learning curve and he had to hold back from applying insecticides as he was accustomed to. “We were doing twice the crop walks this season, monitoring down to a minute level, looking for lacewing eggs and parasitised aphids.” To his relief, it all paid off. By implementing these IPM strategies, Rob successfully controlled the aphids, in his outside crop at least. “In the covered crops we started using ‘soft’ chemicals but later in the season the pressure got too high and we had to use some knockdown chemistry.” He did however use significantly less insecticides than in previous years. “We probably cut our insecticides by half and we got control.”

Lily producer Rob Sadler on his farm in Flowerdale

WHA T’S BEEN ACHIEVED? Over the 2011/12 growing season Rob and his staff learnt a great deal on how to control their key insect pest. The way they make decisions on pest management has changed considerably. “We now monitor and will have a program in place to be prepared for aphid infestations during the season. The monitoring allows for better timing of spraying so insecticides are used only when required. As soon as we see aphids we will spray rather Rob’s outdoor lily crop and flower than relying on the scheduled spraying program we used previously.” Rob is now making more informed decisions on pest management which has both environmental and economic advantages. It has resulted in more efficient aphid control, increased biology on the farm and provided a healthier working environment to staff.

W H O WA S I N V O L V E D ? In 2010, an introductory IPM workshop series was funded by the Australian Government’s Caring for our Country program and hosted by Cradle Coast NRM. The project was organised by Serve-Ag and delivered by Dr. Paul Horne and Jessica Page of IPM Technologies. The following year the program provided funding to support three farmers to implement IPM on their properties. Rob Sadler applied to be involved and through this project received on farm expert advice and support from IPM technologies as well as local support and monitoring assistance from Rebecca Clarkson (Serve-Ag).

WHA T’S NEXT? Rob has decided to continue with the same IPM approach for the following season. He will “still remain fairly cautious about it all,” since seasonal conditions can influence his aphid pressure. The covered cropping will continue to provide challenges in implementing IPM. “We find it’s not easy to control the aphids in the covered cropping. I think it’s because of the micro-climate and the beneficial species don’t seem to establish there as well.”

WA N T T O K N O W M O R E ? Further information on project activities can be obtained from Cradle Coast NRM, Serve-Ag or IPM Technologies. To learn more about IPM and how you could implement IPM on your property, visit the IPM Technologies website (www.ipmtechnologies.com.au) or refer to the following books authored by Paul Horne and Jessica Page: Integrated Pest Management for Crops and Pastures (2008) and Controlling Invertebrate Pests in Agriculture (2012).

This case study relates to the following Cradle Coast NRM program outcome: The knowledge gained and changes implemented by farmers through the IPM project ensures the proper and appropriate application of insecticides protecting biological diversity for healthy, productive landscapes in the region. The Cradle Coast regional NRM strategy can be found online at www.cradlecoastnrm.com