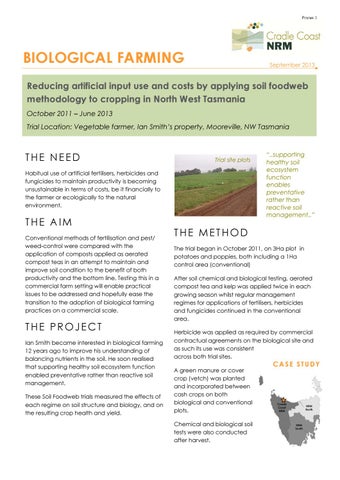 Habitual use of artificial fertilisers, herbicides and fungicides to maintain productivity is becoming unsustainable in terms of costs, be it financially to the farmer or ecologically to the natural environment.

THE AIM Conventional methods of fertilisation and pest/ weed-control were compared with the application of composts applied as aerated compost teas in an attempt to maintain and improve soil condition to the benefit of both productivity and the bottom line. Testing this in a commercial farm setting will enable practical issues to be addressed and hopefully ease the transition to the adoption of biological farming practices on a commercial scale.

THE PROJECT Ian Smith became interested in biological farming 12 years ago to improve his understanding of balancing nutrients in the soil. He soon realised that supporting healthy soil ecosystem function enabled preventative rather than reactive soil management. These Soil Foodweb trials measured the effects of each regime on soil structure and biology, and on the resulting crop health and yield.

THE METHOD The trial began in October 2011, on 3Ha plot in potatoes and poppies, both including a 1Ha control area (conventional) After soil chemical and biological testing, aerated compost tea and kelp was applied twice in each growing season whilst regular management regimes for applications of fertilisers, herbicides and fungicides continued in the conventional area. Herbicide was applied as required by commercial contractual agreements on the biological site and as such its use was consistent across both trial sites. A green manure or cover crop (vetch) was planted and incorporated between cash crops on both biological and conventional plots. Chemical and biological soil tests were also conducted after harvest.

more fungal or bacterial, providing the right ratios of food for the microbes that are required.

Aerobic organisms are the most beneficial for productive and stress free plant growth. Depending on soil or crop needs, brews can be designed to be

variable costs of sprays and fertilisers as required on both sides

Fungicide was sprayed on the conventional site and compost tea and kelps on the biological site. With the early part of the trial requiring compost to be bought in, this represented a saving for the conventional. This phase of the trial also highlighted the importance of good quality compost. The compost used was found to have not been at maturity with low nutrient content and as a consequence fertilser was added at a cost of $800. This may also have affected yields with the immature compost, as organic matter, potentially using up available soil nutrients and providing low

levels of active fungi and bacteria to the detriment of nutrient cycling, soil structure and root protection. At the end of the first phase of the trial, the levels of active fungi and bacteria were much higher in the biological area and ciliate (a freshwater micro-organism) numbers in the conventional area were higher, indicating soil aeration problems i.e. compaction. Bearing such factors in mind, the conventional area provided the best financial return whilst the biological area showed indications of better soil condition, in spite of compost problems.

costs of sprays and fertilisers as required on both sides

“..Aerobic organisms are the most beneficial for productive and stress free plant growth.…”

Compost was made on-farm for the poppy crop and closely monitored. This reduced the need for fertiliser application to small amounts of slow release mineral fertilisers and resulted in cost savings compared to year 1. Crop yields were similar with reduced input costs in the biological site. The concentrations of alkaloid in the biological crop were higher, resulting in a better price per tonne being paid to the farmer. After the second phase of the trial, $725/Ha more profit was achieved in the biological area.

Whilst the crops in this study are potatoes and poppies, the compost/compost tea treatment can be applied to all plant production systems with treatment constituent microorganisms manipulated accordingly. As such it would be envisaged that plant based primary producers in the region could benefit if they adopted similar biological farming systems.

WANT TO KNOW MORE? To find out more about Biological Farming or for further information on foodweb methodology please contact Regional Landcare Facilitator, Spencer Gibbs on 6431 6285 or email sgibbs@cradlecoast.com This case study was collated by

ACKNOWLEDGEMENTS These projects were supported by Cradle Coast Natural Resource Management (NRM) through funding from the Australian Government’s Caring for our Country.