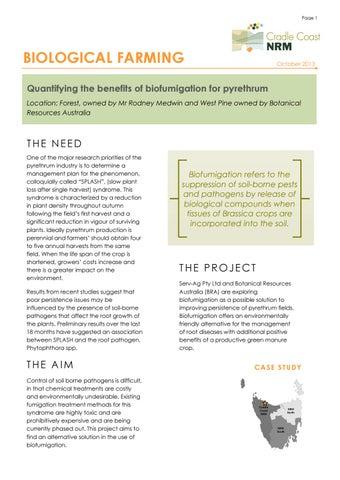 THE NEED One of the major research priorities of the pyrethrum industry is to determine a management plan for the phenomenon, colloquially called “SPLASH”, (slow plant loss after single harvest) syndrome. This syndrome is characterized by a reduction in plant density throughout autumn following the field’s first harvest and a significant reduction in vigour of surviving plants. Ideally pyrethrum production is perennial and farmers’ should obtain four to five annual harvests from the same field. When the life span of the crop is shortened, growers’ costs increase and there is a greater impact on the environment. Results from recent studies suggest that poor persistence issues may be influenced by the presence of soil-borne pathogens that affect the root growth of the plants. Preliminary results over the last 18 months have suggested an association between SPLASH and the root pathogen, Phytophthora spp.

THE AIM Control of soil borne pathogens is difficult, in that chemical treatments are costly and environmentally undesirable. Existing fumigation treatment methods for this syndrome are highly toxic and are prohibitively expensive and are being currently phased out. This project aims to find an alternative solution in the use of biofumigation.

Biofumigation refers to the suppression of soil-borne pests and pathogens by release of biological compounds when tissues of Brassica crops are incorporated into the soil.

THE PROJECT Serv-Ag Pty Ltd and Botanical Resources Australia (BRA) are exploring biofumigation as a possible solution to improving persistence of pyrethrum fields. Biofumigation offers an environmentally friendly alternative for the management of root diseases with additional positive benefits of a productive green manure crop.

THE METHOD Two sites were selected for trials. 4.5ha at Forest and 5ha at West Pine. Both sites had pyrethrum harvested for the first time in January 2012 and were then terminated. Pyrethrum root and soil samples were taken prior to the termination of the two sites for nematode and disease assessment. Both sites were then divided and drilled with biofumigant ‘Caliente 199’ and ryegrass ‘Tama’ in Feb/March 2012. Emergence of both crops was excellent; plant density counts were conducted and were consistent with drilling rates. The process of incorporation involved pulversing both the ‘Caliente 199TM’ and the ryegrass ‘Tama’ using a mulcher followed by incorporation with a rotary hoe. The sites were then left fallow until the drilling of pyrethrum which occurred in September and October 2012.

Collections of pyrethrum plant and soil samples were taken in May 2013. Sampling was conducted in a ‘W’ pattern across each treatment area, with samples collected from each arm of the ‘W’. Along each arm 20 plants were dug up and combined and at each point one trowel of soil was collected and combined. Testing was then conducted for nematodes (misting) and nematode count, for pathogens and Phytopthora.

FINDINGS Biofumigation is a widely accepted technique for reducing soil-borne pathogens in soil and has been shown to be very effective at reducing a range of pathogens in a variety of crops. However in these trials, biofumigation made only a slight but significant reduction in Phytopthora ssp. in pyrethrum cropping system. It is possible that soil temperatures in Tasmania at the time of incorporation were too low to obtain efficient biofumigation effect. Further work is required to effectively integrate this approach into the pyrethrum cropping system.

“This project has provided a launching pad in terms of research into the benefits of biofumigation for pyrethrum. ”

FUTURE WORK This project has provided a launching pad in terms of research into the benefits of biofumigation for pyrethrum. Ongoing work will be necessary to determine the benefits to pyrethrum. It is hoped to refine future research to further benefit the pyrethrum growers in NW Tasmania.

WANT TO KNOW MORE? To find out more about Biological Farming or for further information on Qualifying the benefits of biofumigation for pyrethrum please contact Regional Landcare Facilitator, Spencer Gibbs on 6431 6285 or email sgibbs@cradlecoast.com

This case study was collated by

ACKNOWLEDGEMENTS These projects were supported by Cradle Coast Natural Resource Management (NRM) through funding from the Australian Governmentâ&#x20AC;&#x2122;s Caring for our Country.

Quantifying the benefits of biofumigation for pyrethrum_Case Study

Quantifying the benefits of biofumigation for pyrethrum_Case Study