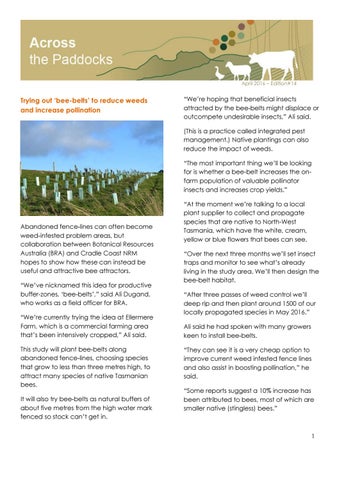 Trying out ‘bee-belts’ to reduce weeds and increase pollination

“We’re hoping that beneficial insects attracted by the bee-belts might displace or outcompete undesirable insects,” Ali said. (This is a practice called integrated pest management.) Native plantings can also reduce the impact of weeds. “The most important thing we’ll be looking for is whether a bee-belt increases the onfarm population of valuable pollinator insects and increases crop yields.”

Abandoned fence-lines can often become weed-infested problem areas, but collaboration between Botanical Resources Australia (BRA) and Cradle Coast NRM hopes to show how these can instead be useful and attractive bee attractors. “We’ve nicknamed this idea for productive buffer-zones, ‘bee-belts’,” said Ali Dugand, who works as a field officer for BRA. “We’re currently trying the idea at Ellermere Farm, which is a commercial farming area that’s been intensively cropped,” Ali said. This study will plant bee-belts along abandoned fence-lines, choosing species that grow to less than three metres high, to attract many species of native Tasmanian bees. It will also try bee-belts as natural buffers of about five metres from the high water mark fenced so stock can’t get in.

“At the moment we’re talking to a local plant supplier to collect and propagate species that are native to North-West Tasmania, which have the white, cream, yellow or blue flowers that bees can see. “Over the next three months we’ll set insect traps and monitor to see what’s already living in the study area. We’ll then design the bee-belt habitat. “After three passes of weed control we’ll deep rip and then plant around 1500 of our locally propagated species in May 2016.” Ali said he had spoken with many growers keen to install bee-belts. “They can see it is a very cheap option to improve current weed infested fence lines and also assist in boosting pollination,” he said. “Some reports suggest a 10% increase has been attributed to bees, most of which are smaller native (stingless) bees.”

If you’re interested in creating your own bee-belts at your place, Ali suggests that it should be simple to install 100-metre long strips at 1.5 metres wide (150 plants) at random locations throughout a productive landscape. If you’d like more information about how to create your own bee-belt, or how the commercial trial is going, you’re welcome to contact Ali Dugand: Field Officer, Botanical Resources Australia on email: ADugand@pyrethrum.com.au or by phone: (03) 6425 5888.

One recent success was with East Ridgely beef producers Mark and Kay Lord who took part in a Farm Planning Program back in 2014, hosted by the Cradle Coast Authority’s NRM team. After seeing first-hand from the program how different grass species could maximise fodder, they went on to re-drill (re-seed) 30 hectares of their own pasture using an Implement Your Plan grant, which was part of the Farm Planning Program. They re-drilled 15 hectares in September 2014 and a further 15 hectares in April 2015 with a deeper-rooted perennial pasture grass species called cocksfoot (Dactylis glomerata) and a pasture herb called plantain (Plantago lanceolata). “Ryegrass needs regular rain, so we wanted to try other deeper-rooted species that would perform better in drier and warmer conditions,” Kay said. “Given the warm and dry conditions of 2015, the main difference we found was that the cocksfoot went on growing when the ryegrass stopped,” she said.

Farmer support programs and field days aimed at showing farmers how to get the best out of their pastures by using mixed grasses are starting to reap benefits for those willing to try it, even during the dry season.

“Having a combination of cocksfoot, ryegrass and plantain provided us with feed and ground cover despite the difficult conditions. “The plantain didn’t grow as well but it persisted. Our other property, which doesn’t have cocksfoot, now has big bare patches.” 2

Her husband Mark said growing a mixture of grasses increased the biodiversity, which attracted good bugs. “It helps with microbial activity and makes the soil denser and more protected. We also saw better water retention in the soil where we planted a combination of grasses. We think it’s better for our animals to have a more diverse diet.” Mark and Kay also attended a field day held at Cradle Coast NRM’s pasture demonstration site at TasTAFE’s Freer Farm campus. The day was jointly organised by Cradle Coast NRM, the Tasmanian Murray Grey Breed Promotion Group, Tas Farming Futures and RM Consulting Group. The theme of the day was, 'Whole System Farming,' which covered the roles played by cattle, soils and pastures and people in beef production. There was also a pilot of a risk analysis tool for beef producers - a handy guide to each stage of production in the beef process. Those who attended also got to see the great diversity of pasture grasses planted in the trial plots at Freer Farm and learn how to assess soil health and microbial activity. “Local farmers can gain a lot from these programs and we highly recommend them to anyone looking to improve their pasture and overall farm management,” Mark said.

Weed warning to farmers As fodder goes on the move across the State to keep livestock going through the dry months, so too it seems for weeds. Weed spread is a potential new threat to farmers, and will be invisible until steady rainfall and new growth is apparent. The Cradle Coast Authority’s Regional Landcare Facilitator Tom O’Malley said weed spread was difficult to contain when farmers were desperate for hay and sellers not discriminate on what they cut and bale. “We know that very large volumes of hay are being trucked all over the state, these loads are not covered and farmers are not necessarily checking the source of the feed,” Tom said. “If farmers can’t insist on written certification from the supplier to ensure against weed contamination, then quarantining feeding areas on their properties is the next best action.” He said a strict quarantined area would reduce weed spread significantly, as would covering loads where possible and cleaning down vehicles after delivery. “Farmers should feed livestock in confined areas that are not near drainage lines or waterways and have shelter from the winds.

“The areas should be visible for the farmer to monitor weed growth from a distance, for example early signs could be circles of new weed growth around silage feed-out areas.” The issue was further compounded, he said, with much of the state impacted by bushfires. “Weed spread can occur when the plants disperse seeds in intense heat and then spread from water flow across the bare ground,” he said.

The Tasmanian Farmer and Graziers Association recently launched the Tas Fodder website to help farmers connect with each other to share and trade resources such as feed. The website is a useful resource, but farmers should be diligent in check the source of the feed to guard against weed spread. The site is at: http://www.tasfodder.com.au/

Farmers whose properties have been impacted by the fires or are in the vicinity of major recent burns should be extra vigilant. Weeds can include the likes of blackberries, thistles, gorse, broom and any other noxious plant species. Tom said farmers could take the precaution of learning how to identify weeds. The State government has a weed index online at: http://dpipwe.tas.gov.au/invasivespecies/weeds/weeds-index

Across the Paddocks - Edition 14

Trying out 'bee-belts' to reduce weeds and increase pollination

Across the Paddocks - Edition 14

Trying out 'bee-belts' to reduce weeds and increase pollination