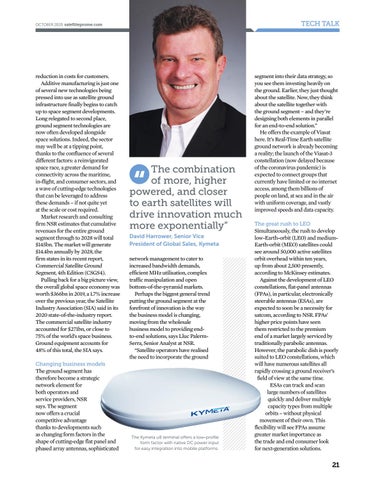 reduction in costs for customers. Additive manufacturing is just one of several new technologies being pressed into use as satellite ground infrastructure finally begins to catch up to space segment developments. Long relegated to second place, ground segment technologies are now often developed alongside space solutions. Indeed, the sector may well be at a tipping point, thanks to the confluence of several different factors: a reinvigorated space race, a greater demand for connectivity across the maritime, in-flight, and consumer sectors, and a wave of cutting-edge technologies that can be leveraged to address these demands – if not quite yet at the scale or cost required. Market research and consulting firm NSR estimates that cumulative revenues for the entire ground segment through to 2028 will total $145bn. The market will generate $14.4bn annually by 2028, the firm states in its recent report, Commercial Satellite Ground Segment, 4th Edition (CSGS4). Pulling back for a big picture view, the overall global space economy was worth $366bn in 2019, a 1.7% increase over the previous year, the Satellite Industry Association (SIA) said in its 2020 state-of-the-industry report. The commercial satellite industry accounted for $271bn, or close to 75% of the world’s space business. Ground equipment accounts for 48% of this total, the SIA says.

The ground segment has therefore become a strategic network element for both operators and service providers, NSR says. The segment now offers a crucial competitive advantage thanks to developments such as changing form factors in the shape of cutting-edge flat panel and phased array antennas, sophisticated

The Kymeta u8 terminal offers a low-profile form factor with native DC power input for easy integration into mobile platforms.

segment into their data strategy, so you see them investing heavily on the ground. Earlier, they just thought about the satellite. Now, they think about the satellite together with the ground segment – and they’re designing both elements in parallel for an end-to-end solution.” He offers the example of Viasat here. It’s Real-Time Earth satellite ground network is already becoming a reality; the launch of the Viasat-3 constellation (now delayed because of the coronavirus pandemic) is expected to connect groups that currently have limited or no internet access, among them billions of people on land, at sea and in the air with uniform coverage, and vastly improved speeds and data capacity. The great rush to LEO

Simultaneously, the rush to develop low-Earth-orbit (LEO) and mediumEarth-orbit (MEO) satellites could see around 50,000 active satellites orbit overhead within ten years, up from about 2,500 presently, according to McKinsey estimates. Against the development of LEO constellations, flat-panel antennas (FPAs), in particular, electronically steerable antennas (ESAs), are expected to soon be a necessity for satcom, according to NSR. FPAs’ higher price points have seen them restricted to the premium end of a market largely serviced by traditionally parabolic antennas. However, the parabolic dish is poorly suited to LEO constellations, which will have numerous satellites all rapidly crossing a ground receiver’s field of view at the same time. ESAs can track and scan large numbers of satellites quickly and deliver multiple capacity types from multiple orbits – without physical movement of their own. This flexibility will see FPAs assume greater market importance as the trade and end consumer look for next-generation solutions.