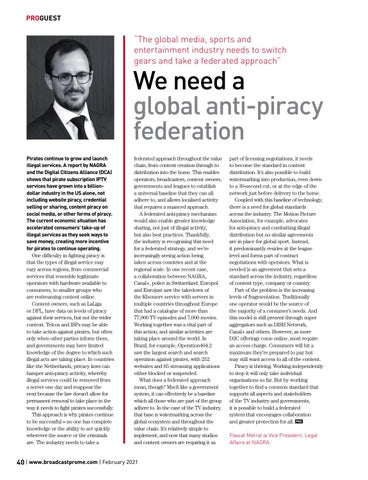 “The global media, sports and entertainment industry needs to switch gears and take a federated approach”

We need a global anti-piracy federation Pirates continue to grow and launch illegal services. A report by NAGRA and the Digital Citizens Alliance (DCA) shows that pirate subscription IPTV services have grown into a billiondollar industry in the US alone, not including website piracy, credential selling or sharing, content piracy on social media, or other forms of piracy. The current economic situation has accelerated consumers’ take-up of illegal services as they seek ways to save money, creating more incentive for pirates to continue operating. One difficulty in fighting piracy is that the types of illegal service may vary across regions, from commercial services that resemble legitimate operators with hardware available to consumers, to smaller groups who are restreaming content online. Content owners, such as LaLiga or DFL, have data on levels of piracy against their services, but not the wider context. Telcos and ISPs may be able to take action against pirates, but often only when other parties inform them, and governments may have limited knowledge of the degree to which such illegal acts are taking place. In countries like the Netherlands, privacy laws can hamper anti-piracy activity, whereby illegal services could be removed from a server one day and reappear the next because the law doesn’t allow for permanent removal to take place in the way it needs to fight pirates successfully. This approach is why pirates continue to be successful – no one has complete knowledge or the ability to act quickly wherever the source or the criminals are. The industry needs to take a

federated approach throughout the value chain, from content creation through to distribution into the home. This enables operators, broadcasters, content owners, governments and leagues to establish a universal baseline that they can all adhere to, and allows localised activity that requires a nuanced approach. A federated anti-piracy mechanism would also enable greater knowledge sharing, not just of illegal activity, but also best practices. Thankfully, the industry is recognising this need for a federated strategy, and we’re increasingly seeing action being taken across countries and at the regional scale. In one recent case, a collaboration between NAGRA, Canal+, police in Switzerland, Europol and Eurojust saw the takedown of the Kboxserv service with servers in multiple countries throughout Europe that had a catalogue of more than 77,000 TV episodes and 7,000 movies. Working together was a vital part of this action, and similar activities are taking place around the world. In Brazil, for example, Operation404.2 saw the largest search and search operation against pirates, with 252 websites and 65 streaming applications either blocked or suspended. What does a federated approach mean, though? Much like a government system, it can effectively be a baseline which all those who are part of the group adhere to. In the case of the TV industry, that base is watermarking across the global ecosystem and throughout the value chain. It’s relatively simple to implement, and now that many studios and content owners are requiring it as

part of licensing negotiations, it needs to become the standard in content distribution. It’s also possible to build watermarking into production, even down to a 30-second cut, or at the edge of the network just before delivery to the home. Coupled with this baseline of technology, there is a need for global standards across the industry. The Motion Picture Association, for example, advocates for anti-piracy and combatting illegal distribution but no similar agreements are in place for global sport. Instead, it predominantly resides at the league level and forms part of contract negotiations with operators. What is needed is an agreement that sets a standard across the industry, regardless of content type, company or country. Part of the problem is the increasing levels of fragmentation. Traditionally one operator would be the source of the majority of a consumer’s needs. And this model is still present through super aggregators such as DISH Network, Canal+ and others. However, as more D2C offerings come online, most require an access charge. Consumers will hit a maximum they’re prepared to pay but may still want access to all of the content. Piracy is thriving. Working independently to stop it will only take individual organisations so far. But by working together to find a common standard that supports all aspects and stakeholders of the TV industry and governments, it is possible to build a federated system that encourages collaboration and greater protection for all. Pascal Métral is Vice President, Legal Affairs at NAGRA.