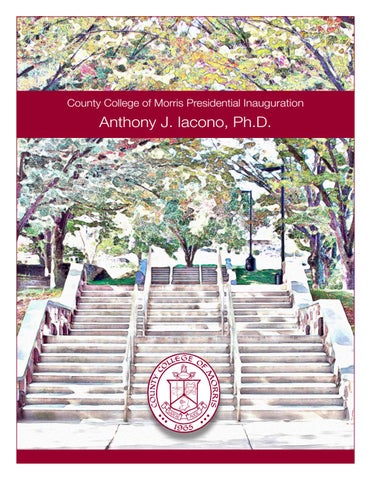 Every person has the ability to make the world a little better by simply getting involved.

Find your purpose, find your passion, and employ them to help others.

You will be amazed at the difference you can make.

Anthony J. Iacono, Ph.D. As the Third President of

The Pledge of Allegiance * The National Anthem * CCM Chamber Choir

Investiture and Presentation of the Presidential Medallion Paul R. Licitra Chair, County College of Morris Board of Trustees

Introduction of the President Deborah Iacono

* The Audience is asked to stand (if able). Members of the audience are requested to stay in place until the academic procession has completely withdrawn from the gymnasium. All of our guests are invited to a reception honoring President Iacono in the Student Community Center immediately following the ceremony. 5

WE ARE CCM. YOUR COLLEGE. YOUR COMMUNITY. For nearly fifty years, County College of Morris (CCM) has stood as a quality institution providing an outstanding and affordable education for the residents of Morris County and the surrounding area. Since the college opened in 1968, nearly 50,000 graduates have passed through its halls. Today, CCM offers 48 associate degrees and more than 25 certificate programs. A dedicated faculty of leading experts in their fields provides CCM students with a learning environment that has produced one of the highest graduation and transfer rates among the state’s community colleges. Also included among its distinctions, CCM is the only community college in New Jersey to be named a National Center of Academic Excellence in Cyber Defense Education by the National Security Agency and Department of Homeland Security. PayScale also has placed CCM as the top community college in New Jersey based on the earnings of the college’s graduates. Additionally, BestColleges.com has rated CCM a top community college in New Jersey, while Washington Monthly magazine has recognized CCM as a top community college for adult learners. The college also serves as an important community resource offering numerous cultural activities and events for the public, including its well-respected Longo Planetarium shows, a full performing and visual arts schedule and its annual Teen Arts Festival.

Mission Statement County College of Morris is committed to excellence in teaching and lifelong learning through the delivery of exceptional programs and services to our students and to the larger community that reflect a dedication to inclusiveness and diversity, educational advancement, cultural enrichment and workforce development.

Values Statement The college’s commitment to serve the residents and businesses of Morris County and the State of New Jersey and to sustain engaged citizenship within a diverse population of students and community members is reflected in six values: • A commitment to people, evidenced by a secure, supportive environment responsive to the needs of students, employees and the community • A commitment to the academic mission of the college, which entails the search for truth and respect for scholarship and learning • A commitment to honesty and integrity in all endeavors 6

Dr. Anthony J. Iacono Dr. Anthony J. Iacono, a community college graduate, became the third president of County College of Morris (CCM) on September 1, 2016. Prior to that, he served as Vice President of Academic Affairs at Indian River State College (IRSC) in Fort Pierce, FL, where he served as a core member of the team that helped IRSC earn recognition by the Aspen Award Committee as one of the top three community colleges in the nation. He began his career in education as a professor of History. Dr. Iacono is committed to the mission of community colleges and their unique role in providing superior educational opportunities. He is also a firm believer that great community colleges are those which strengthen the local economy by helping to retain existing businesses and by training a skilled workforce to attract new companies. Dr. Iacono chairs the Board of Directors for the Picatinny Innovation Center, serves on the Morris County Chamber of Commerce Board and is a current participant in Leadership Morris. He also serves on various state committees and is eager to work with individuals and organizations in Morris County, throughout New Jersey and across the nation to ensure that CCM is a recognized leader in innovation and outcomes. A strong supporter of higher education and its power to transform lives, Dr. Iacono has served as an advisor to the United States Department of Education, the Florida Department of Education and various national think tanks and educational reform organizations. He is also one of the four founders of Floridaâ&amp;#x20AC;&amp;#x2122;s Institute for the Professional Development of Adult Educators. Dr. Iacono is a first-generation college student who received his Ph.D. in American History from Mississippi State University, his M.A. and B.A. in American History from the University of Central Florida, and his Associate in Arts in General Studies from Indian River Community College.

COUNTY COLLEGE OF MORRIS PRESIDENTS Dr. Sherman H. Masten 1965 – 1986 Dr. Sherman H. Masten was CCM’s founding president, serving from 1966, two years before the college opened, until his retirement in 1986. Originally from Tenafly, Dr. Masten was an Air Force veteran and received the Air Medal and Distinguished Flying Cross for his service in World War II. After attaining his Doctor of Education degree at New York University, he served as an administrator at Hofstra University and went on to participate in the founding and development of New York’s Ulster County Community College. Dr. Masten’s experience, vision and emphasis on quality and service brought the college through its planning and building stages, from the drawing of blueprints, to the construction of Henderson Hall, to its successful opening in 1968. He oversaw the hiring of faculty and staff, development of the curriculum and establishment of the college’s initial policies. During his tenure, the college expanded to include nine buildings and a full slate of educational programs. Following his retirement, Dr. Masten maintained close ties to CCM and continued to attend events at the college until he and his wife moved to Baltimore in 2000 to be near their youngest son. Dr. Masten died at age 86 in 2007. His wife, Dorothy, a CCM graduate, established a memorial scholarship at CCM in his name.

Dr. Edward J. Yaw 1986 – 2016 Dr. Edward J. Yaw was appointed the second president of the college in 1986. Dr. Yaw first joined CCM in 1980 as Dean of Academic Affairs. Prior to that, he served as Associate Dean of Academic Affairs at Adelphi University in New York. Under his leadership, CCM became one of the state’s leading community colleges. As a result of his vision and guidance, the college gained one of the highest combined transfer and graduation rates among community colleges in New Jersey. Students and faculty also regularly received awards and honors for their accomplishments. In addition, Dr. Yaw played an instrumental role in shaping higher education in New Jersey through his work on professional and educational councils. During his service as chair of the New Jersey Presidents Council – representing all of the state’s colleges and universities – he led the effort to enact a statewide transfer agreement to ease the process for students seeking to pursue their educations beyond an associate degree. An active community leader, he has served on the boards of numerous organizations, including the Morris County Chamber of Commerce and the Urban League of Morris County, offering his time and expertise to improving the lives of others. Dr. Yaw earned his Ed.D. from Columbia University, his M.S. from Southern Illinois University and his B.A. from Harpur College, SUNY Binghamton. 8

COUNTY COLLEGE OF MORRIS Board of Trustees

Katie A. Olsen, Director of Development

All trustees also serve concurrently as members of the CCM Foundation. Members noted with an * serve on the Foundation Board of Directors.

Where raptors soar The mountain o’er Let us resolve with might To seek and find with open minds The love of truth and light “Sapere Aude! Sapere Aude!” To all the world we show That CCM women and men Will ever dare to know. Alma Mater by Sander Zulauf, Professor Emeritus of English 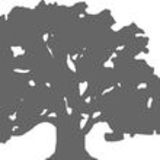