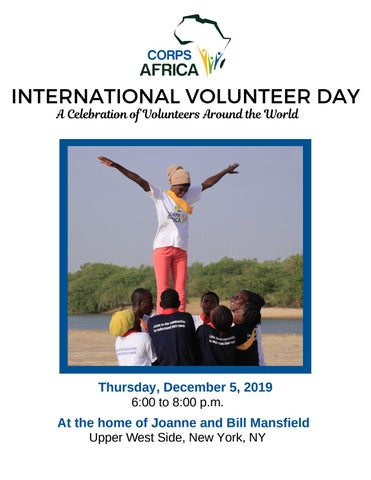 INTERNATIONAL VOLUNTEER DAY A Celebration of Volunteers Around the World

FEATURED SPEAKERS Zizwa Mwafulirwa Medical Doctor, CorpsAfrica Alum, Master's Candidate Dr. Zizwa Mwafulirwa is from Mzuzu in northern Malawi. He holds Bachelor of Medicine and Bachelor of Surgery (MBBS) degrees from University of Malawi’s College of Medicine. He was elected Vice President of the University of Malawi Medical Students’ Association (UMMSA) and served as class president for three consecutive academic years. From 2017-2018, Zizwa served as a CorpsAfrica Volunteer in Malawi. He is currently pursuing a Masters of Science in Global Health Policy and Management at Brandeis University on scholarship. Zizwa plans to apply his expertise toward making healthcare in Malawi effective and accessible for all.

Julie Sherbill CorpsAfrica HQ Staff Member, RPCV-Morocco Julie Sherbill has a BA in Public Policy from the University of Michigan and an MA in Global Affairs from Bahçeşehir University in Istanbul. After working for Atlas Corps in Washington, DC, she served as the first Peace Corps Volunteer in a village near Chichaoua, Morocco. She returned last year and currently works as Program and Development Assistant at CorpsAfrica headquarters.

Chef Pierre Thiam Culinary Ambassador, Restaurateur, Social Entrepreneur, Author Pierre Thiam is a chef, author, and social activist best known for bringing West African cuisine to the global fine dining world. He is executive chef of the award-winning Nok by Alara, in Lagos, Nigeria, and the Signature Chef of the 5-star Pullman Hotel in Dakar, Senegal. He is also executive chef and co-owner of the pan-African restaurant Teranga, housed inside New York City's Africa Center. The restaurant has received rave reviews from the New York Times, The New Yorker, and Food and Wine.

Jocelyn C. Zuckerman (Moderator) Writer, CorpsAfrica Board Member, RPCV-Kenya Jocelyn C. Zuckerman has more than 25 years experience as a writer and editor, specializing in agriculture, the environment, and the Global South. She has served as executive editor of Modern Farmer and Whole Living and as deputy editor of Gourmet. The recipient of a James Beard Award for feature writing, she received a Master’s degree, with honors, from Columbia University’s Graduate School of Journalism. Jocelyn’s first book, Planet Palm, will be published next year by The New Press.

Processing Unit in Segou How a CorpsAfrica Volunteer is helping chef Pierre Thiam change the world:

In his landmark new book,Â The Fonio Cookbook: An Ancient Grain Rediscovered, Pierre Thiam celebrates fonio, an ancient "miracle grain" from his childhood that he believes has the potential to change the world. In line with this vision, a CorpsAfrica Volunteer in Senegal named Faty Ka facilitated a fonio cooperative at her site in Segou. The Kedougou Region, where Segou is located, has one of the highest child-mortality rates in Senegal. This situation is partly due to a lack of access to financial resources and healthcare. But the area has arable land, and therefore great potential for development. This is why the women of Segou decided to set up a cooperative focused on processing local products such as fonio. The group aims to strengthen its economic position by utilizing and promoting the village's rich agricultural resources. The project was generously funded by World Connect (worldconnectus.org).

Testimonials For the first time we have a project for us and by us. This project is really ours, and we will prove it. ~Moumini Ndiaye This project is for the women of Segou, but it is not just about the women in Segou. It is also that of men because the relief of our wives, mothers, sisters, and daughters is also a relief and happiness for our husbands, sons, brothers, and fathers. ~Thierno Mamadou Diallo

ABOUT CORPSAFRICA CorpsAfrica sends collegeeducated young Africans to live in remote villages in their own countries to facilitate small-scale, high-impact projects that are identified by local people, along the lines of the Peace Corps model. We are grateful to OCP for their ongoing generous support.