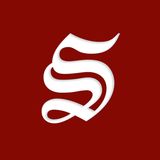 The Cornell Daily Sun is an independent newspaper published in Ithaca, New York by students at Cornell University. It is the oldest continuously independent college daily in the United States. The Sun features original coverage of and commentary on the university and its environs. It prints three days a week (Monday, Tuesday and Thursday) when the University is open for academic instruction as a tabloid-sized daily. In addition to these regular issues, The Sun publishes a graduation issue and a freshman issue, which is mailed to incoming Cornell freshmen before their first semester. The paper is free on campus and online. The Sun is staffed entirely by Cornell students, aside from a few full-time production and business positions and is fully independent of the university. It operates out of its own building in downtown Ithaca. The Sun was recently named the best college newspaper in the United States, according to The Princeton Review.