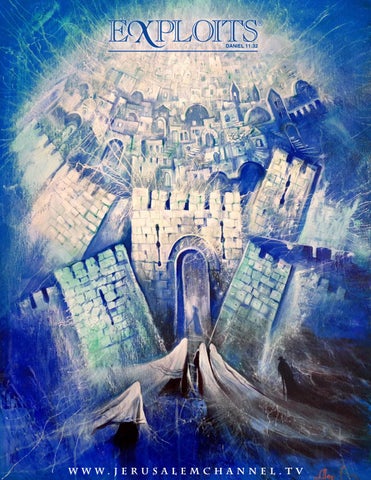 Anticipating a Day of Joy for Israel By Christine Darg The 9th of Av, one of the Hebrew calendar days of fasting and mourning, is destined to become a joyful festival according to Zechariah 8:19 Years ago I said to the Lord that I would always try to be in Israel on the 9th of Av as a watchman intercessor, and so current travel prohibitions are perplexing. However, we marked this solemn day with an invitation to a global internet conference focusing on the latest “peace plan.” Congresswoman Michele Bachmann asked the Almighty to prompt Prime Minister Netanyahu and President Trump to withdraw the maps and the proposed plan itself. Even though there are some laudable aspects promoting Israeli sovereignty over Judea and Samaria, the plan’s provision for a Palestinian state violates Joel 3:2. Also Zechariah 12: 3

clearly states that all who tamper with the Lord’s immovable rock of Jerusalem will be severely injured. I am increasingly convinced that God is a legalist regarding these verses! We repented for our nations’ meddling. Is it just a coincidence that the day after the plan was unveiled at the White House, the Covid task force was set up? Both Israel and America are being ravaged economically and with riots. Israel is su�ering 25 per cent unemployment, and hospitals are at capacity. We pray for the Lord to grant us a little more time to win souls and build the Body of Messiah. Only God knows if current events have passed the point of no return. Eventually Daniel 9:27 must come to pass. That verse prophesies a covenant resulting in Daniel&#39;s ﬁnal 70th week and the Great Tribulation. Let us continue to work while it is yet day! Maranatha!

Exploits Ministry has been given recognition for its decades of work in building bridges between Jews and Christians. The Root Source organization named Christine Darg as among top pioneers in Jewish-Christian relations. Awarded posthumously at left was Rabbi Yechiel Eckstein, founder of International Fellowship of Christians and Jews. Also honored among 70 bridge builders were some of our ministry’s long-term associates and UK trustee Barbara Dingle.

Signposts in the Showbread

By Christine Darg Are you noticing how End-time events have taken a great leap forward? Not too long ago I couldn’t imagine how fast the cashless society and all the other conditions necessary for the one world government of the Antichrist could progress to the point where we are presently. But enter the pandemic crisis, and suddenly cash is becoming too dirty to handle; cashless transactions are preferred because they don&#39;t require hand sanitizing. People the world over are showing themselves to be remarkably complaint to wear masks, to social distance and acquiesce to lock downs —even willing to submit to a mandatory vaccine in order to travel, trade, buy and sell. Who could have imagined only a couple of months ago these scenarios happening this fast? But now they are reality! Meanwhile, in Israel every week plans are progressing toward the Jewish dream of opening the house of prayer for all nations, the rebuilding of the holy temple of God. Some of the most ardent religious Jews are fervently praying to see this dream of the ages come to pass. They don’t know that a great Rabbi, the apostle Paul, prophesied long ago that the Antichrist will desecrate the rebuilt temple during the future period of testing called the Great Tribulation. He will demand to be worshipped in God’s house. Not even Hitler pulled that off. The future time of GreatTribulation will be so turbulent that Jesus said in Matthew 24:21 that since the beginning of the world until this time there will be nothing to equal it. Jesus quoted the prophet Daniel in Daniel 12: 1, which says, “There will be a time of distress such as has not happened from the beginning of nations.”

The amazing sign of the Temple showbread is being revived and has prophetic, messianic signiﬁcance. The high priest garments have been prepared; the hunt for the red heifer calf is underway to be part and parcel of the reinstituted sacriﬁcial system; the holy anointing oil has been restored; and also the baking of the showbread is a big topic in Orthodox Jewish circles. This ancient bread is called in Hebrew Lechem HaPanim, literally meaning the “Bread of the Faces.” In the Bible it was also called the “Bread of The Presence” because it was miraculously kept in the very presence of God without growing mould or going stale. Twelve loaves representing the 12 tribes of Israel were stacked in two piles of six on a golden table with two gold cups of pure frankincense. The central petition of the Lord&#39;s Prayer is Give us this day, our daily bread. Jesus, the eternal Word of God, offered his very body to be broken as the Bread of Life to make Atonement, for the sake of the entire cosmos. This is the mystery we proclaim around the table of holy communion. Yeshua is a type of Eucharistic showbread: and as often as we eat of this bread and drink from the cup in His Presence, we commemorate the Lord’s death until He comes.

Faith Based Shabbat Meals in Jerusalem

By Christine Darg We are grateful to our faithful partners’ support of Exploits Ministry and Jerusalem Channel. You not only keep our programs going around the world but also enable us to engage in various humanitarian projects in Israel, the Mideast, the UK and elsewhere as the Lord leads. Many of you have helped us to sponsor babies through Israel’s pro-life organization; and another favourite project is our support of an Orthodox Jewish rabbi to hold charitable shabbat meals where

Christians are also welcomed to dine and to share each week’s Torah portion. Our shabbat meals have been a unique bridgebuilding project through the years. Israeli organizations such as Root Source, the Knesset Christian Allies Caucus and Israel’s emergency services, Magen David Adom, have recognized our ministry and its Trustees on a number of occasions as being amongst the forefront in leadership of Jewish-Christian relations. We praise God for his favour upon our ministry and honour your faithful support that enables us to make a prophetic impact. As Psalm 133 declares, “How good and pleasant it is when God’s people sit together!”

The mandate of EXPLOITS MINISTRY And you shall be my witnesses both in Jerusalem, and in all Judaea, and in Samaria, and unto the uttermost part of the earth. (Acts 1:8) In the USA Exploits/Daystar International is a tax-deductible 501(c)3 charity PO Box 2768 Staunton, Virginia 24402 USA In the UK Exploits is a registered charity (108 5931) PO Box 109 Hereford HR4 9XR England To make a one-time or monthly donation by credit or debit card, visit our website www.jerusalemchannel.tv/donate To contact us by email: jerusalemchannel@icloud.com Page 2 Photo by Mhel Pineda Cover Photo: ‘Rhapsody in Blue’ Painting by Alex Levin www.artlevin.com © All rights reserved August 2020