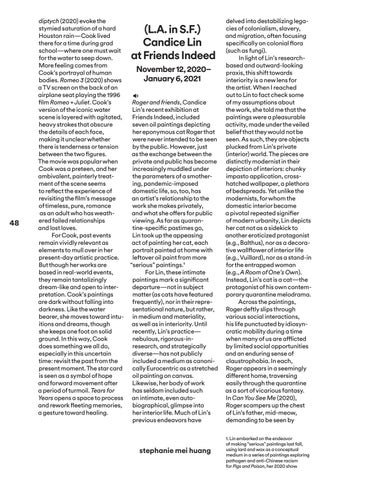 diptych (2020) evoke the stymied saturation of a hard Houston rain—Cook lived there for a time during grad school—where one must wait for the water to seep down. More feeling comes from Cook’s portrayal of human bodies. Romeo 3 (2020) shows a TV screen on the back of an airplane seat playing the 1996 film Romeo + Juliet. Cook’s version of the iconic water scene is layered with agitated, heavy strokes that obscure the details of each face, making it unclear whether there is tenderness or tension between the two figures. The movie was popular when Cook was a preteen, and her ambivalent, painterly treatment of the scene seems to reflect the experience of revisiting the film’s message of timeless, pure, romance as an adult who has weathered failed relationships and lost loves. For Cook, past events remain vividly relevant as elements to mull over in her present-day artistic practice. But though her works are based in real-world events, they remain tantalizingly dream-like and open to interpretation. Cook’s paintings are dark without falling into darkness. Like the water bearer, she moves toward intuitions and dreams, though she keeps one foot on solid ground. In this way, Cook does something we all do, especially in this uncertain time: revisit the past from the present moment. The star card is seen as a symbol of hope and forward movement after a period of turmoil. Tears for Years opens a space to process and rework fleeting memories, a gesture toward healing.

(L.A. in S.F.) Candice Lin at Friends Indeed November 12, 2020– January 6, 2021 Roger and friends, Candice Lin’s recent exhibition at Friends Indeed, included seven oil paintings depicting her eponymous cat Roger that were never intended to be seen by the public. However, just as the exchange between the private and public has become increasingly muddled under the parameters of a smothering, pandemic-imposed domestic life, so, too, has an artist’s relationship to the work she makes privately, and what she offers for public viewing. As far as quarantine-specific pastimes go, Lin took up the appeasing act of painting her cat, each portrait painted at home with leftover oil paint from more “serious” paintings.¹ For Lin, these intimate paintings mark a significant departure—not in subject matter (as cats have featured frequently), nor in their representational nature, but rather, in medium and materiality, as well as in interiority. Until recently, Lin’s practice— nebulous, rigorous-in-­ research, and strategically diverse—has not publicly included a medium as canonically Eurocentric as a stretched oil painting on canvas. Likewise, her body of work has seldom included such an intimate, even auto­ biographical, glimpse into her interior life. Much of Lin’s previous endeavors have

delved into destabilizing legacies of colonialism, slavery, and migration, often focusing specifically on colonial flora (such as fungi). In light of Lin’s researchbased and outward-looking praxis, this shift towards interiority is a new lens for the artist. When I reached out to Lin to fact check some of my assumptions about the work, she told me that the paintings were a pleasurable activity, made under the veiled belief that they would not be seen. As such, they are objects plucked from Lin’s private (interior) world. The pieces are distinctly modernist in their depiction of interiors: chunky impasto application, crosshatched wallpaper, a plethora of bedspreads. Yet unlike the modernists, for whom the domestic interior became a pivotal repeated signifier of modern urbanity, Lin depicts her cat not as a sidekick to another eroticized protagonist (e.g., Balthus), nor as a decorative wallflower of interior life (e.g., Vuillard), nor as a stand-in for the entrapped woman (e.g., A Room of One’s Own). Instead, Lin’s cat is a cat—the protagonist of his own contemporary quarantine melodrama. Across the paintings, Roger deftly slips through various social interactions, his life punctuated by idiosyncratic mobility during a time when many of us are afflicted by limited social opportunities and an enduring sense of claustrophobia. In each, Roger appears in a seemingly different home, traversing easily through the quarantine as a sort of vicarious fantasy. In Can You See Me (2020), Roger scampers up the chest of Lin’s father, mid-meow, demanding to be seen by 1. Lin embarked on the endeavor of making “serious” paintings last fall, using lard and wax as a conceptual medium in a series of paintings exploring pathogen and anti-Chinese racism for Pigs and Poison, her 2020 show

Contemporary Art Review Los Angeles (Carla) is is a quarterly magazine, online art journal, and podcast committed to being an active source for critical dialogue surrounding Los Angeles’ art community. In this issue we think about dreams. Daydreams provide an opportunity to rework our own experiences and tap into the collectivity of the common space—where we might come up with new realities together. The issue includes articles on: Brianna Rose Brooks, Movement workshops, Christine Sun Kim, Made in L.A. 2020: a version, Khalil Joseph, Ben Sanders, Carrie Cook, Candice Lin, and Sean Townley 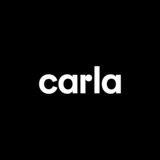