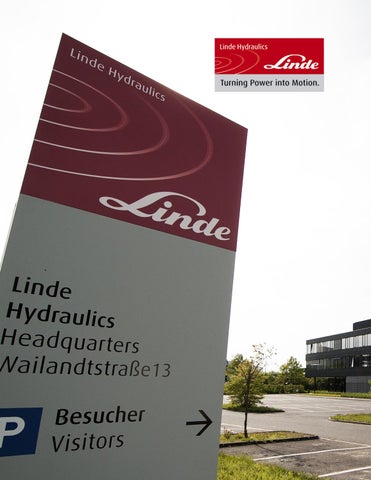 Giving Machinery A Lift Linde Hydraulics Corp. of Canfield, OH celebrates its 50th year of incorporation in the United States this year. Written by Kevin Doyle Produced by Stephen Marino

ormed initially in 1970 as a local, U.S. service entity within Linde Material Handling of German-based Linde AG, Linde Hydraulics Corp. of Canfield, OH celebrates its 50th year of incorporation in the United States this year. “Back in those days we were still part of the Linde Gas Group, a very, very small part of that whole industry group. Subsequent to that we expanded by going independent,” explains President John Kumler. “We’ve been independent now since 2013 and are no longer a part of the Linde Material Handling Group. They are an important customer, and key shareholder now.” Kumler adds that Linde Hydraulics is a high-pressure piston, pump and motor, Continuous Variable Transmission (CVT) and load-sensing valve manufacturer. “We started as a master distributor here in North America but began localization of production in the U.S. back in the fourth quarter of 2018. Also in that same time frame we opened a second facility in Rock Hill, S.C. and have the ability to expand that to 100,000sf. It’s essentially open space so that we can design the layout the way we want it. It will be a work in progress and we’ll expand that facility as we grow our sales here in North America,” Kumler notes.

The company employs 60 and has experienced double-digit growth since 2015. However it has experienced the same COVID-19 driven financial slowdown as the rest of the global market and, Kumler says, is looking to clear this crater and resume its growth track. It has been steadily growing the company’s distribution and service network. As part of its current growth and selfimprovement strategy, the company has been ISO certified at both facilities this year, which Kumler calls “a long overdue milestone for us.”

hydraulics and its systems set the bar in fuel consumption reduction and CO2 emission. The company operates as the development partner and supplier of a number of manufacturers of mobile work machinery in the construction, mining, agricultural, forestry, municipal, and industrial sectors. “We’re engaged pretty much in every industry that uses heavy duty hydraulics. We do a bit more agricultural with our German group in

Europe but we’re also engaged with people like CNH and John Deere here in the US,” Kumler adds. As part of its growth initiative, the company took a calculated risk by attending ConExpo 2020 in March only to find attendance at the event – held every three years – flattened by the financial downturn. Linde had doubled its booth size, increased its floor space and arranged its meeting space to display products with the applications it would fit into. “We were disappointed with the overall turnout but made the decision to continue and participated with a much smaller team than our big

box competitors that decided not to come. Participation and visitation was way down where we were,” says Kumler, who nevertheless considers attendance as having been a beneficial exercise. “The people who were coming through were looking for specific solutions and we had some very good meetings with distributor/partners and potential customers from all over the Americas,” says Kumler, who oversees Latin America and South America as well and leans on a small team in Brazil that is directly responsible for South America. The company’s methodology of going

Linde Hydraulics Corporation | 7 to market is multi-layered. “With large multi-nationals in construction and similar types of customers, sometimes we are the point of sale and sometimes we are the support element and the point of sale is in Europe. For local business we handle customers directly from our Sales and Engineering teams here in North America. The third level is through a network of distributors throughout North America that carry and promote our product and we support them,” Kumler explains. Most of the company’s dealers are set up within a specific territory although some occasionally operate outside a region but only, Kumler says, if a client

would benefit from having nearby access to the same Linde dealer. The company’s main supplier is its German-based parent, Linde Hydraulics GmbH & Co KG, established in 1904. “We look for people in our supply base that are motivated to provide all that customers demand. We want partners that will support our customers and have a supplier vetting system that we go through,” Kumler says.

Empowered Workplace Kumler views himself as a benevolent leader and relishes his role as a cheerleader and communicator. It’s

Linde Hydraulics Corporation | 8 a skill set honed over the course of more than 40 years in the industry that includes time as a Designer with Caterpillar and includes a stretch in the railroad and maintenance-of-way industry. He joined Linde in Sales in 1988, held a variety of roles and has been President for the past nine years. “As a business leader, part of my job is to be a cheerleader. I feel like we communicate well with our employees, I feel like we’re honest with our employees and I think my empathy toward our employees comes across,” he points out. He says the workforce, without

question, drives the company and is carrying it along its growth path. “Our people give us the strength and the people have the relationships both inside the company and outside the company to get the job done,” he stresses. “All the basic things are met – good pay, good benefits, it’s safe, warm and dry – and everybody has an open say-so with what they do. If they see something wrong they are encouraged to talk about it so we can drive continuous improvement.”

Looking Ahead The company was in good shape

prior to the onset of the economic problems. Given the sectors it operates in and the reputation for excellence it has forged, it should be able to re-start its engines in relatively smooth fashion. “We’re growing and I think it’s been beneficial for everyone that we’ve added on these last three years and that it’s created a growth

atmosphere. You can’t make everybody happy, even in a small organization. That’s a fact so you try to make decisions based on what’s good for the entire team,” Kumler concludes.