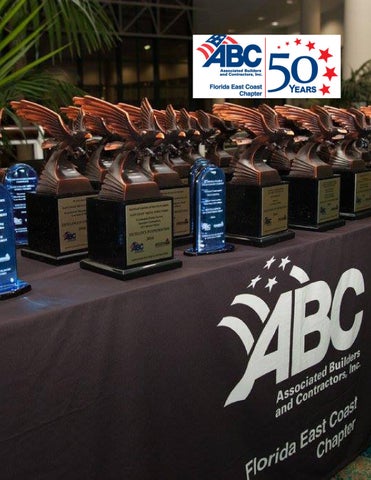 The ABC East Coast Chapter espouses the merit shop philosophy and as the largest industry association in Florida, serves as the voice of commercial construction Written by Kevin Doyle Produced by Stephen Marino

hen Hurricane Irma careened through Florida in September 2017 causing catastrophic damage in excess of $100bn, Associated Builders and Contractors (ABC) Florida East Coast Chapter stood ready to help both residents and its members impacted by one of the most ferocious Atlantic Ocean storms on record. “A lot of people need help that don’t have the means themselves, the elderly and the poor. Those are the ones we try to do extra outreach with. The hurricane just made a bad situation even worse,” says chapter President &amp; CEO Peter Dyga. “We have the contacts. We can reach out to our 500-plus members and say ‘Can somebody out there help this person?’ That’s one of the ways we can help, through sheer volume of contacts. “South Florida and especially the Keys have a long way to go to recover. In the Keys, there are often not enough contractors to begin with and a lot of them lost everything – their tools and, in some instances, their only form of transportation. We’re able to help,” Dyga adds. “There is going to be a lot of long-term reinvestment in infrastructure. Any way we can help out, we’re trying to.”

The association is a member of the Disaster Contractors Network in Florida and has also partnered with The United Way in the recovery effort. Now in its 50th year, the ABC East Coast Chapter espouses the merit shop philosophy and serves as the voice for its membership at the local, state and federal levels of government. As the largest construction association in Florida with the highest percentage (67%) of contractors, it provides industry training, safety training and professional development

ABC Florida East Coast Chapter | 5 the Florida Legislature. He became President in 2012. The chapter is regarded as a leader in Government Affairs, now under the leadership of VP Carol Bowen. “To get a single bill passed in State Legislature is a challenge – we had three of our major objectives pass (in 2017) and I just think that speaks incredibly well to our influence and the respect we have in Tallahassee,” says Dyga. “We’ve gotten better at the things we were recognized leaders of. It comes down to you have to be in tune with your industry needs.” The association supplements Bowen’s work with contract lobbyists to ensure it has maximum opportunities to each of its 518 members. “We are very conscientious about being a contractor organization. The contractor community doesn’t always see eye-to-eye. You have General Contractors and the Specialty trades but all are equal within our association. Our goal is to represent the entire industry,” Dyga explains.

ABC Florida East Coast Chapter | 6 representation. ABC also holds the largest industry “Day on the Hill” in Tallahassee. “It is the largest gathering and it’s important for any industry to be there. Legislators want to hear from company owners, the people signing the paycheck. We take contractors up there for a day and a half and encourage them to have conversations with legislators about the challenges we face in the industry,” Dyga explains.

We have the contacts. We

can reach out to our 500-plus members and say ‘Can somebody out there help this person?’ That’s one of the ways we can help, through sheer volume

country. The impact of Hurricane Irma has exacerbated that problem in South Florida, creating more work in an already tight market. Dyga says ABC spends about $2 million in training, marketing and PR, sponsors programs at middle and high schools, and engages with school counselors. Importantly, he says the message had to change. According to research by the Federal Government, 65% of jobs in in the future will not require a traditional four-year college degree. “The opportunities available in construction are good first choices

ABC Florida East Coast Chapter | 7 that are in high demand. They may require a journeyman license, or apprenticeship, but you will have zero student debt and a job right from the get-go. In Florida, student debt has to be borne by the contractor. So you’re working while you’re training,” Dyga points out. In addition to middle and high school students, those in the 25- to 35-year-old age group who may be disillusioned with their chosen profession are a prime target market. “Our culture is such that everyone is encouraged to go to college. It’s like turning a battleship, but we’re trying to change that. A good

alternative is a four-year certification program. It’s not a booby prize. It’s an equally good first choice,” he stresses.

Safety Initiatives The more than 900 apprentices who are association members are immersed in the importance of job safety for the first six months of their tenure. “It includes OSHA 10 training. Safety is a huge part of what we’re about. It’s a culture thing and, as an industry, we need to be sure we are promoting it,” Dyga asserts. Nationwide, as an organization, ABC’s Safety Training and Evaluation Process (STEP) provides every contractor the tools necessary to evaluate and assess its own safety protocol. “We have as many of our members take part as possible. You find out where your shortcomings are and you find out how to improve them. If it’s inconvenient for our contractors to go somewhere to take OSHA classes, then we’ll bring it to them. We can offer that convenience,” Dyga says.

Professional Development The association has a Young Professionals Committee and a

“They may need some soft skills or some advanced management skills to achieve even higher goals in their professional career,” Dyga says. “It’s been a tremendously successful program.” The association also maintains two student chapters at Florida International University and Florida Institute of Technology, which both offer Construction Management

To get a single bill passed in

State Legislature is a challenge – we had three of our major 0bjectives pass (in 2017) and I just think that speaks incredibly well to our influence and the respect we have in Tallahassee.

Leadership ABC program. Its member companies are encouraged to identify employees who may be interested in pursuing a management track.

COMPANY INFORMATION degrees. Additionally, it provides apprenticeship, foreman and superintendent training, the latter through a two-week program at Purdue’s highly acclaimed Project Management Academy. In the final analysis, given the depth and breadth of all that the ABC Florida East Coast Chapter offers, it is sound business for South Florida commercial contractors to become members.

“We’re in tune with our industry needs. In general, we’re here to be part of the solution,” Dyga concludes.