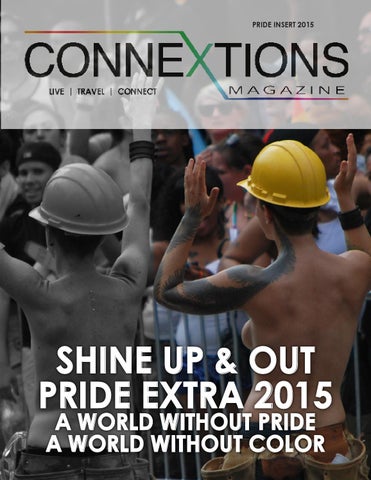 This photo editorial aims to show what a colorless world would be like. Our world is not black and white, most issues are not black and white. “Equality” should be a black and white issue - we either HAVE EQUALITY or WE DO NOT HAVE EQUALITY - that’s it. It really is that simple! At this moment in time, we still DO NOT HAVE EQUALITY. The LGBT community is not treated equally, by laws and people, the same way that our heterosexual brothers and sisters are treated. So, if we take the topic of EQUALITY as a black and white issue, anyone with any degree of intelligence can clearly see how UNequal we are and this is why we have “PRIDE” Festivals accross the globe. The LGBT community does not celebrate PRIDE because, we are too full of ourselves, it’s not an excuse to drink and party, although some people do. On Saturday June 28, 1969, a police raid on the Stonewall Inn in New York City’s Greenwich Village erupted and a group of LGBT patrons who were there, decided to fight back. Perhaps not realizing at the time, their fight was a wake-up call for our community to regain our rights as human beings, to be able to gather and fight for the right to be treated as equals. And this was the beginning of PRIDE. The first PRIDE march took place a few months later, on November 2, 1969 in New York City. This would become an annual reminder to be more relevant, to be more open, to reach a greater number of people, and encompass the ideas and ideals of our larger struggles. PRIDE started. But what would a world without PRIDE look like? It would look unfinished. It would be a world full of deception, fears, depression, and hostility because PRIDE means acceptance, means to be happy to be who you are, you are no longer in hiding, no longer afraid someone can out you, you are now sharing your true self with others and therefore, part of the world and part of the human race. UPDATE: This essay was originally published in the Summer Issue #18 of Connextions Magazine, published in May 2015. On June 26, 2015, the US Supreme Court ruled that Marriage Equality is now the law of the land. Pictures provided by Manny Velasquez-Paredes, Shelly Straub & Lucia Camarda. www.ConnextionsMagazine.com | Shine Up & Out Pride Extra 2015

(Confirmed dates by time of publishing)