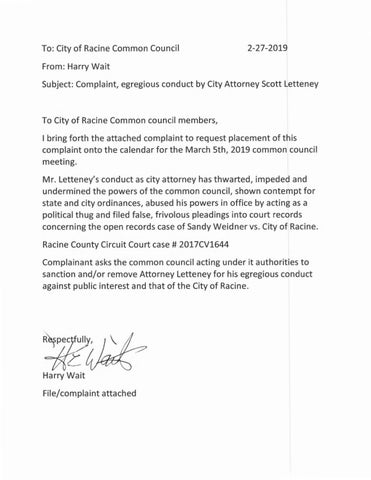 To: City of Racine Common Council

To City of Racine Common council members, I bring forth the attached complaint to request placement of this complaint onto the calendar for the March 5th, 2019 common council meeting. Mr. Letteney's conduct as city attorney has thwarted, impeded and undermined the powers of the common council, shown contempt for state and city ordinances, abused his powers in office by acting as a political thug and filed false, frivolous pleadings into court records concerning the open records case of Sandy Weidner vs. City of Racine. Racine County Circuit Court case# 2017CV1644 Complainant asks the common council acting under it authorities to sanction and/or remove Attorney Letteney for his egregious conduct against public interest and that of the City of Racine.

Complaint: City Attorney Scott Letteney has an extensive history of egregious conduct while in office, undermining the interest of the people and the City of Racine.

To wit as follows: City Attorney Scott Letteney violates both the letter and spirit of the law concerning Wisconsin Public Records statutes. As city attorney, Scott Letteney has an extensive history of engaging in tactics of deny, delay and defer open records request in direct violation of Wisconsin Public record statutes 19.19-.39. Under Letteney's supervision, the city attorney's office thwarts, hinders and impedes the general public's right to know by deceit, lies and untimely response times.

Scott Letteney undermines and thwarts the responsibilities of the City Common Council. Scott Letteney withheld and hid failed pre employment drug screening test of City employee Timothy Thompkins. By withholding and hiding the failed pre employment drug test, Attorney Letteney undermined and thwarted the scrutiny of Common council members during the hiring/ vetting process. Mr. Letteney undermined this vetting process which is in place to protect the interest of the public and the city Scott Letteney further undermined common council responsibilities by failing to give notice that Mayor Mason had engaged in a contract with MWH Law Group to conduct a police study to be billed by the hour. This billing by the hour arrangement circumvented oversight and scrutiny by the common council, thus avoiding any discussions by common council concerning the focus, scope, cost or spending caps of the study. Thus far the mayor has kept the study secret despite public funds being used to commission such study. Current cost of the study has been published by the Journal Times at $118,000 dollars and counting. These types of actions by both the mayor and city attorney Letteney undermines the authority of the common council and renders the council as irrelevant.

Scott Letteney abused the powers of the city attorney's office to silence and stifle a political candidate. Abusing the powers of the city attorney's office, Mr. Letteney brought forth ethics proceedings against then mayoral candidate Sandy Weidner in a most timely manner to inflict maximum damage to candidate Weidner's campaign Mr. Letteney acting as a political thug presented a secret power point presentation to fellow common council members to make Sandy Weidner an example of what happens when you do your job as a councilman too well. Mr. Letteney then further engaged in unethical conduct by refusing to release the complete presentation for further scrutiny and review. Scott Letteney's act of refusal to provide such documents violated Alderman Sandy Weidner's rights of due process. Alderman Sandy Weidner then filed a writ of Mandamus where city attorney Scott Letteney filed frivolous pleadings into court, further abused claims of documents being privileged and requested the entire Open Records case of Sandy Weidner vs. City of Racine to be sealed contrary to Wisconsin statutes 59.20(3), 757.14 and ist. Amendment rights: Wisconsin Statute 59.20(3), The court shall:

"open to the examination of any person all books and papers required to be kept in his or her office and permit any person so examining to take notes and copies of such books, records, papers or minutes .... " Wisconsin Statute 757.14 "The sittings of every court shall be public and every citizen may freely attend the same ...... " Citizens are directly empowered by Wisconsin statute 757.14 to observe court proceedings. 1st. Amendment of the United States Constitution empowers citizen rights of speech, to be heard, to assemble, to have knowledge of court calendars', to attend, observe and scrutinize court proceedings ... ........... ecetera Mr Letteney subverted the above statutes and the 1st. Amendment by filing frivolous and false pleadings into the court Alderman Sandy Weidner endured the darkness of a complicit, unlawful secret court for 7 months until complainant filed a motion to intervene on behalf of public interest.

Complainant has no knowledge or information that Mr. Letteney ever sought approval from the common council for funds to pursue such outrageous, egregious and unconstitutional acts within the court against the sitting alderman. This egregious conduct of Attorney Scott Letteney along with the frivolous filings have squandered public funds in the excess of $75,000 dollars and still counting.

Scott Letteney has exhibited negligence in the legal oversight of Machinery Row. Scott Letteney failed to act against straw man purchaser Rodney Blackwell. As city attorney Scott Letteney turned a blind eye and deaf ear to the project, city officials squandered and misappropriated millions of tax dollars while displacing businesses contrary to law. Mr. Letteney should be well aware of the irregularities of Machinery Row and of the filed criminal complaint which includes fraud. Complainant alleges city attorney Scott Letteney is a scofflaw and unfit for public service. Secret surveys, secret meetings, secret government and secret courts are not in public or city interest, members of the city council should not be content with being made irrelevant as other city official's act to subvert, undermine and negate the responsibilities of the council.

I close my complaint with the following:

"The very word "secrecy" is repugnant in a free and open society; and we are as a people inherently and historically opposed to secret societies, to secret oaths and to secret proceedings. We decided long ago that the dangers of excessive and unwarranted concealment of pertinent facts far outweighed the dangers which are cited to justify it. Even today there is little value in opposing the threat of a closed society by imitating its arbitrary restrictions. Even today there is little value in insuring the survival of our nation if our traditions do not survive with it. And there is very grave danger that an announced need for increased security will be seized upon by those anxious to expand its meaning to the very limits of official censorship and concealment. {Pres. John Kennedy} Racine WI. Complainant asks the common council acting under it authorities to sanction and/or remove Attorney Letteney for his egregious con...

Racine WI. Complainant asks the common council acting under it authorities to sanction and/or remove Attorney Letteney for his egregious con...