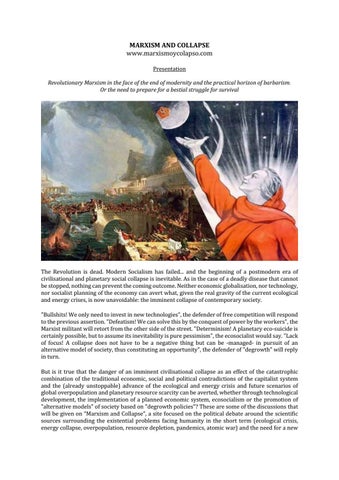 Presentation Revolutionary Marxism in the face of the end of modernity and the practical horizon of barbarism. Or the need to prepare for a bestial struggle for survival

The Revolution is dead. Modern Socialism has failed... and the beginning of a postmodern era of civilisational and planetary social collapse is inevitable. As in the case of a deadly disease that cannot be stopped, nothing can prevent the coming outcome. Neither economic globalisation, nor technology, nor socialist planning of the economy can avert what, given the real gravity of the current ecological and energy crises, is now unavoidable: the imminent collapse of contemporary society. &quot;Bullshits! We only need to invest in new technologies&quot;, the defender of free competition will respond to the previous assertion. &quot;Defeatism! We can solve this by the conquest of power by the workers&quot;, the Marxist militant will retort from the other side of the street. &quot;Determinism! A planetary eco-suicide is certainly possible, but to assume its inevitability is pure pessimism&quot;, the ecosocialist would say. &quot;Lack of focus! A collapse does not have to be a negative thing but can be -managed- in pursuit of an alternative model of society, thus constituting an opportunity&quot;, the defender of &quot;degrowth&quot; will reply in turn. But is it true that the danger of an imminent civilisational collapse as an effect of the catastrophic combination of the traditional economic, social and political contradictions of the capitalist system and the (already unstoppable) advance of the ecological and energy crisis and future scenarios of global overpopulation and planetary resource scarcity can be averted, whether through technological development, the implementation of a planned economic system, ecosocialism or the promotion of &quot;alternative models&quot; of society based on &quot;degrowth policies&quot;? These are some of the discussions that will be given on “Marxism and Collapse”, a site focused on the political debate around the scientific sources surrounding the existential problems facing humanity in the short term (ecological crisis, energy collapse, overpopulation, resource depletion, pandemics, atomic war) and the need for a new

strategic programmatic framework in the face of an inevitable nearby process of civilisational collapse and human extinction. … WELCOME TO MARXISM AND COLLAPSE The last theoretical and programmatic frontier of the Socialist Revolution

The aim of this site is to provide a space for information, dissemination and debate on the immediate existential problems currently facing our species and civilisation (e.g. the looming prospect of catastrophic climate change and widespread energy collapse). One of the tasks of this site will be to report on the state of the scientific discussion around these threats and their possible projections during the present century. From here, Marxism and Collapse seeks to establish collaborations with all researchers of these issues, as well as with anyone seriously interested in their study, inviting them to develop common initiatives in the fields of dissemination and study of these topics. Secondly, Marxism and Collapse defends the need for a new Marxist strategic programmatic framework in the face of the inevitable process of civilisational collapse and human extinction that has already begun to loom on the historical horizon. The latter as a result of the super-catastrophic combination of the effects of the traditional economic, social and political contradictions of the capitalist system and the already unstoppable advance of the ecological and energy crises and the future scenarios of world overpopulation and planetary resource scarcity. Considering the lack of classical Marxist elaboration on these dangers, as well as the limits of so-called ecosocialism and other tendencies of Marxist political ecology (many of which, while understanding the possibility of a near civilisational collapse, refuse to accept it as an imminent practical historical horizon), Marxism and Collapse is posed as a space for the development of the theoreticalprogrammatic milestones necessary for the discussion of a new Marxism. In other words, a Marxism endowed with a new programme, a new theory and a new political practice for revolution adapted to

the new (savage) historical era that is beginning to unfold before us: the collapse of civilisation, human extinction and the apocalypse itself. Understanding that the adoption of a new Marxist theoretical and programmatic framework, adapted to the conditions of the coming collapse of civilisation, will not &quot;fall from the sky&quot; nor will it be presented in the form of an &quot;intellectual journey&quot;, Marxism and Collapse seeks to establish contact with the militants and political leaders of all the existing anti-capitalist organisations in the international arena. The latter in order to discuss with them the imperative need to promote &quot;political insurrections&quot; against the negationist leaderships of their political organizations and to seek to impose, in a radical way, the advance of the Marxist-collapsist reflection within them. Marxism and Collapse&#39;s invitation to Marxist revolutionaries is: Impose this discussion on your leaderships... or finish them off! Finally, assuming that the inevitable crisis of civilisation that is approaching will constitute a moment of fundamental rupture of the basic pillars of the modern world not only in the economic, social and political dimensions, but also in the cultural and artistic spheres and in the elemental conceptions of the modern worldview, Marxism and Collapse is proposed as a space for artistic and literary elaboration and reflection on this forthcoming &quot;cognitive rupture&quot; that will confront human societies. Seeking to establish a dialogue with creators from the most diverse artistic and literary disciplines, Marxism and Collapse invites you to send us your contributions and reflections to be exhibited on this site. 2019-2021 www.marxismoycolapso.com

The Revolution in its final hour Marxism in the face of the decisive and final battle of the Holocene class struggle! The last theoretical and strategic battle of the Revolution, the last ideological combat of Marxism There is less than a decade to go before the onset of a super catastrophic climate change dynamic and global civilisational collapse. We need to prepare for the cataclysm. Become part of the Marxism and Collapse Web Community! Marxism has no more than a decade to carry out a complete renewal of its theory and strategicprogrammatic framework in order to prepare for the ecological civilisational cataclysm that will soon alter, at its roots, the dynamics of the world economy, politics and class struggle... to the point of its ultimate collapse. Marxism must prepare for an inevitable historical cataclysm on a geological scale... or die!

Marxism and Collapse - Web Presentation (Collapsist Marxism) The Revolution in its final hour Marxism in the face of the decisive and final battle of the Holocene class struggle! The last theoretical and strategic battle of the Revolution, the last ideological combat of Marxism There is less than a decade to go before the onset of a super catastrophic climate change dynamic and global civilisational collapse. We need to prepare for the cataclysm. Become part of the Marxism and Collapse Web Community! Marxism must prepare for an inevitable historical cataclysm on a geological scale... or die! 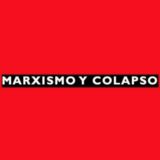