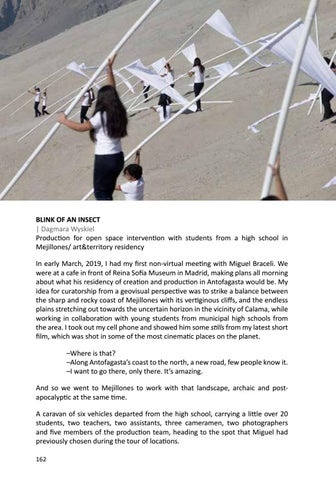 BLINK OF AN INSECT | Dagmara Wyskiel Production for open space intervention with students from a high school in Mejillones/ art&amp;territory residency In early March, 2019, I had my first non-virtual meeting with Miguel Braceli. We were at a cafe in front of Reina Sofía Museum in Madrid, making plans all morning about what his residency of creation and production in Antofagasta would be. My idea for curatorship from a geovisual perspective was to strike a balance between the sharp and rocky coast of Mejillones with its vertiginous cliffs, and the endless plains stretching out towards the uncertain horizon in the vicinity of Calama, while working in collaboration with young students from municipal high schools from the area. I took out my cell phone and showed him some stills from my latest short film, which was shot in some of the most cinematic places on the planet. –Where is that? –Along Antofagasta’s coast to the north, a new road, few people know it. –I want to go there, only there. It’s amazing. And so we went to Mejillones to work with that landscape, archaic and postapocalyptic at the same time. A caravan of six vehicles departed from the high school, carrying a little over 20 students, two teachers, two assistants, three cameramen, two photographers and five members of the production team, heading to the spot that Miguel had previously chosen during the tour of locations. 162 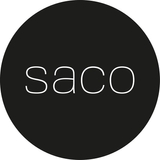