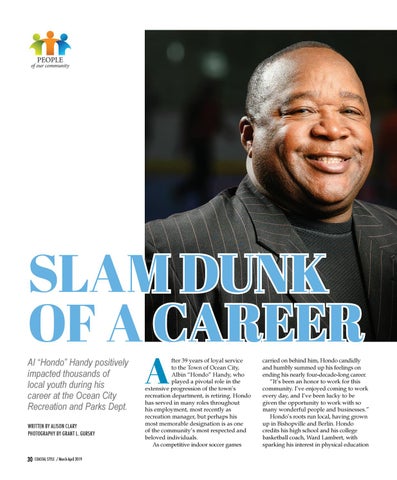 fter 39 years of loyal service to the Town of Ocean City, Albin “Hondo” Handy, who played a pivotal role in the extensive progression of the town’s recreation department, is retiring. Hondo has served in many roles throughout his employment, most recently as recreation manager, but perhaps his most memorable designation is as one of the community’s most respected and beloved individuals. As competitive indoor soccer games

carried on behind him, Hondo candidly and humbly summed up his feelings on ending his nearly four-decade-long career. “It’s been an honor to work for this community. I’ve enjoyed coming to work every day, and I’ve been lucky to be given the opportunity to work with so many wonderful people and businesses.” Hondo’s roots run local, having grown up in Bishopville and Berlin. Hondo credits his high school and his college basketball coach, Ward Lambert, with sparking his interest in physical education