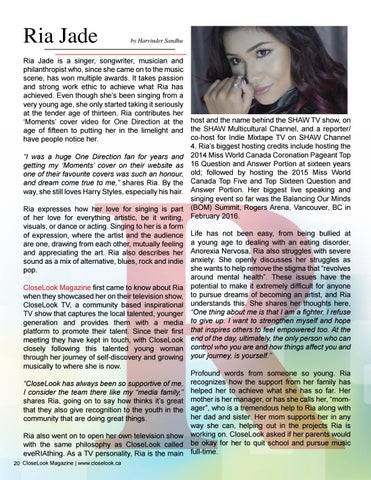 Ria Jade is a singer, songwriter, musician and philanthropist who, since she came on to the music scene, has won multiple awards. It takes passion and strong work ethic to achieve what Ria has achieved. Even though she’s been singing from a very young age, she only started taking it seriously at the tender age of thirteen. Ria contributes her ‘Moments’ cover video for One Direction at the host and the name behind the SHAW TV show, on age of fifteen to putting her in the limelight and the SHAW Multicultural Channel, and a reporter/ co-host for Indie Mixtape TV on SHAW Channel have people notice her. 4. Ria’s biggest hosting credits include hosting the “I was a huge One Direction fan for years and 2014 Miss World Canada Coronation Pageant Top getting my ‘Moments’ cover on their website as 16 Question and Answer Portion at sixteen years one of their favourite covers was such an honour, old; followed by hosting the 2015 Miss World and dream come true to me,” shares Ria. By the Canada Top Five and Top Sixteen Question and way, she still loves Harry Styles, especially his hair. Answer Portion. Her biggest live speaking and singing event so far was the Balancing Our Minds Ria expresses how her love for singing is part (BOM) Summit, Rogers Arena, Vancouver, BC in of her love for everything artistic, be it writing, February 2016. visuals, or dance or acting. Singing to her is a form of expression, where the artist and the audience Life has not been easy, from being bullied at are one, drawing from each other, mutually feeling a young age to dealing with an eating disorder, and appreciating the art. Ria also describes her Anorexia Nervosa, Ria also struggles with severe sound as a mix of alternative, blues, rock and indie anxiety. She openly discusses her struggles as she wants to help remove the stigma that “revolves pop. around mental health”. These issues have the CloseLook Magazine first came to know about Ria potential to make it extremely difficult for anyone when they showcased her on their television show, to pursue dreams of becoming an artist, and Ria CloseLook TV, a community based inspirational understands this. She shares her thoughts here, TV show that captures the local talented, younger “One thing about me is that I am a fighter, I refuse generation and provides them with a media to give up. I want to strengthen myself and hope platform to promote their talent. Since their first that inspires others to feel empowered too. At the meeting they have kept in touch, with CloseLook end of the day, ultimately, the only person who can closely following this talented young woman control who you are and how things affect you and through her journey of self-discovery and growing your journey, is yourself.” musically to where she is now. Profound words from someone so young. Ria “CloseLook has always been so supportive of me, recognizes how the support from her family has I consider the team there like my “media family,” helped her to achieve what she has so far. Her shares Ria, going on to say how thinks it’s great mother is her manager, or has she calls her, “momthat they also give recognition to the youth in the ager”, who is a tremendous help to Ria along with her dad and sister. Her mom supports her in any community that are doing great things. way she can, helping out in the projects Ria is Ria also went on to open her own television show working on. CloseLook asked if her parents would with the same philosophy as CloseLook called be okay for her to quit school and pursue music eveRIAthing. As a TV personality, Ria is the main full-time. 20 CloseLook Magazine | www.closelook.ca

Welcome to the first edition of CloseLook Magazine! A one of a kind magazine that brings the real people & their real inspirational stories to the front. For more, visit www.closelook.ca