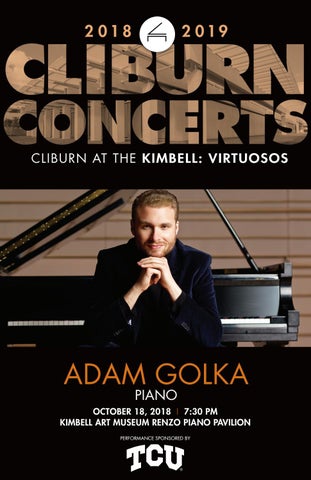 CLIBURN AT THE KIMBELL: VIRTUOSOS

for supporting this performance of

*Made possible by generous gifts to the Cliburn Endowment.

Steinway & Sons is the official piano of the Cliburn. This concert is being recorded. Please silence all electronic devices.

Born and raised in Texas to a family of Polish musicians, pianist Adam Golka has won widespread critical and popular acclaim with his “brilliant technique and real emotional depth” (The Washington Post). A recipient of the Gilmore Young Artist Award and a fellowship from the American Pianists Association, he has been regularly on the concert stage since the age of 16, when he won first prize at the 2nd China Shanghai International Piano Competition. Adam was recently selected by Sir András Schiff to perform recitals at the Klavier-Festival Ruhr in Germany, Tonhalle Zürich, as well as in Berlin and New York (organized by the 92nd Street Y). During summer 2018, he and conductor Jayce Ogren made their San Francisco Symphony debuts at the 81st annual Stern Grove Festival. He also returned to the Krzyżowa Festival in Poland, performed the Mahler Piano Quartet at the Bennington Chamber Music Conference, and offered a solo recital at The Hornby Island Festival in British Columbia and an Alice Tully Hall duo-recital with pianist Orion Weiss. During the 2018–2019 season, Adam’s concerto engagements include the Mozart Concerto No. 24 in C Minor, K. 491 with the Narodowe Forum Muzyki (NFM) Leopoldinum Chamber Orchestra; Beethoven’s Piano Concerto No. 1 with Symphony in C at the Rutgers-Camden Center for the Arts; and the Stravinsky Concerto for Two Pianos with pianist Roman Rabinovich in Tel-Aviv at the Israel Conservatory/Eden-Tamir Music Center. In addition to his Cliburn recital, Adam appears at the Chopin Society of Texas in Corpus Christi, and the Chopin Foundation (USA) in Miami, FL. Last week, Adam was here in Fort Worth for his annual collaboration with Performing Arts Fort Worth’s Children’s Education Program and the Cliburn for the production of “Van Cliburn: An American Hero,” presented for 12,000 North Texas fourth-graders each year at Bass Performance Hall. With his extensive concerto repertoire, Adam has appeared as a soloist with dozens of orchestras, among those the BBC Scottish, Atlanta, Houston, Dallas, Indianapolis, and Seattle Symphonies; National Arts Orchestra of Ottawa; and the Shanghai and Warsaw Philharmonics. He made his Carnegie Hall Isaac Stern Auditorium debut in 2010, collaborating with the New York Youth Symphony, and also performed a cycle of all five Beethoven concertos with the Lubbock Symphony under the baton of his brother, Tomasz Golka. As a recitalist, he has performed scores of solo concerts, among those at excellent venues such as Lincoln Center’s Alice Tully Hall in New York, Concertgebouw’s Kleine Zaal, and Musashino Civic Cultural Hall in Tokyo, and at festivals such as Mostly Mozart, Gilmore, Ravinia, Newport Music, and Duszniki Chopin festivals. As a chamber musician, his appearances have included prestigious festivals such as Marlboro, Caramoor, Ravinia, and Music@Menlo. Adam has premiered solo works written for him by Richard Danielpour, Michael Brown, and Jarosław Gołembiowski. His debut disc, featuring the First Sonata of Brahms and the “Hammerklavier” Sonata of Beethoven, was released in 2014 on First Hand Records. As a child, Adam studied with his mother, Anna Golka, as well as with Dariusz Pawlas. For most of his teenage years and as a young adult, he studied at TCU with 1985 Cliburn Gold Medalist José Feghali, who he considers his most significant influence. Adam also spent four years at the Peabody Conservatory studying with Leon Fleisher. Since finishing his official studies, Adam has continued to work with great musicians such as András Schiff, Alfred Brendel, Mitsuko Uchida, Richard Goode, Murray Perahia, Ference Rados, and Rita Wagner. He is artist-in-residence at the College of the Holy Cross in Worcester, MA, where he teaches piano, chamber music, and leads the Holy Cross Chamber Orchestra.

PURSUING YOUR PASSION. In TCUâ&#x20AC;&#x2122;s College of Fine Arts, we put our passion into practice. Our powerful academic community prepares responsible leaders who elevate the arts through their talent, intelligence and values.

Sonata No. 7 in D Major, op. 10, no. 3 Ludwig van Beethoven b. December 1770, Bonn, Germany d. March 26, 1827, Vienna, Austria Beethoven’s Sonata in D Major, op. 10, no. 3, represents a major step in the piano sonata genre. The overwhelming drama and emotional breadth of the Largo e mesto movement is unprecedented. This movement is the centerpiece of an otherwise jubilant and often comical sonata, and the emotional paradox it presents is what has recently fascinated me. I cannot help but think of the finale of Mozart’s Don Giovanni: The vocal ensemble sings a comedic coda immediately after the harrowing, terrifying descent of Don G into hell. The contrast is totally perplexing, and shows the extremes that can be found in the D minor-D major relationship. Beethoven in his later years had a harder time shedding the skin of his tragedies so easily. Perhaps this change of attitude in modulating from tragedy took place with the increasing strength of the individual spirit in romanticism. But not yet so in op. 10, no. 3—there is no attempt to overcome it, the epic tragedy is somehow just quickly forgotten and life moves on!

GET YOUR TICKETS TODAY FOR THE 2019 CLIBURN FESTIVAL.

HONORARY CHAIRMAN THE BEST YOUNG PIANISTS ON THE PLANET ARE COMING TO TEXAS! FINAL ROUND PERFORMANCES WITH THE DALLAS SYMPHONY ORCHESTRA I RUTH REINHARDT, CONDUCTOR

30 Chords for Adam Folk Variations Michael Brown b. 1987, Oceanside, New York Michael Brown and Roman Rabinovich are two composer-pianists that I deeply admire and with whom I am lucky to share a great friendship. In 2016, we produced each other’s new albums, which are all available from First Hand Records in London. They produced my recording of Schumann, and I highly encourage you to carefully listen to Roman playing Haydn’s Sonatas, and Michael playing Beethoven, Mendelssohn, and Bernstein, as well as his own works. Michael Brown is from Long Island and has an impressive portfolio of solo, chamber, vocal, and symphonic works. His music is characterized by scintillating rhythms, unfailing sense of proportion, luminosity, and a poetic spirit. On my 30th birthday, he surprised me with a PDF file called 30 Chords for Adam. I was in Knoxville, performing with the Knoxville Symphony, when I received his birthday email, and I was so touched I learned the minuscule composition and performed it as an encore after my concert that night. To me it is like a perfect Haiku, and it is no accident the first notes are “A-D-A-…” (there is no musical note for M…).

Folk Variations is a work written for me in 2013 on the occasion of a recital tour I did featuring all folk-inspired works. When my great friend was remiss in punctually delivering the work to me, I began to tease him that I would perform “Yankee Doodle” instead and bring him great shame. Somehow that recurring joke made it into the final piece. The opening chords which form the theme of these variations are none other than the melody notes of “Yankee Doodle” stacked vertically one on top of the other, into a series of exotic chords. The variations develop in speed and character until reaching a rousing climax, after which one can hear each variation briefly revisited in a quick retrograded return to the opening character of the piece. One motive which makes a cameo is Brahms’ First Piano Sonata, which I was also performing in the 2013 tour.

“Antiquity” from Memory Box Roman Rabinovich b. 1985, Tashkent, Uzbekistan Roman Rabinovich, born in Uzbekistan and raised in Israel, lives deep in his evocative imagination; you can hear this throughout his fascinating cycle Memory Box. I can’t help but see a great link between the intoxicating sonorities of his compositions and his highly colorful, whimsical abstract paintings. Several of them hang in my New York apartment. “Antiquity” is a movement that stirred me the first time he played sketches for me in his apartment. To me it evokes, in its mysterious ambience, the contemplation of an antique statue, a pondering of the thousands of years of human history and art. The musical gestures are at times like a gentle breeze, at other times distant sighs, even at times one can hear bells.

Capriccio in B Minor, op. 76, no. 2 Intermezzo in A Major, op. 118, no. 2 Rhapsody in E-flat Major, op. 119, no. 4 Johannes Brahms b. May 7, 1833, Hamburg, Germany d. April 3, 1897, Vienna, Austria I recently wondered why I once felt instinctive guilt for programming isolated pieces from Brahms’ masterful opuses of short piano works. Yet, I never hesitated to play an individual Intermezzo as an encore. This year, I decided to rise above my guilt and choose a few of my favorites to share with you. The Capriccio in B Minor, op. 76, no. 2, with its Hungarian syncopations and chromatic mischief, is an endless delight to play. The A-Major Intermezzo is a piece that in every moment of life presents new beauties and challenges. Yet, above anything, it is one of the most moving, comforting, intimate creations to hear or play. The E-flat Major Rhapsody is his final piano piece and takes inspiration from Schubert’s E-flat Impromptu, in that it is a piece in a major key which—a highly rare occurrence in the music literature—is doomed to always end in minor.

Cracovienne Fantastique, op. 14, no. 6 Ignacy Jan Paderewski b. November 6, 1860, Kurylivka, Ukraine d. June 29, 1941, New York City, New York Ignacy Jan Paderewski was not only one of the most remarkable pianists of the early 20th century, he plays a crucial part in Polish history for being Prime Minister after World War I. His efforts directly led to the emancipation of Poland, the 100th anniversary of which is now being celebrated. It only seemed right to include two of his charming piano miniatures in today’s program. Paderewski spent much of his life in the United States; you can still taste the wines from his vineyards in Paso Robles, CA. I cannot help but feel an autobiographical connection to the great man with my mixed identity as a Polish-American. However, unlike the master, I’m no Hollywood star. (Yet…!)

Fantasy in F Minor/A-flat Major, op. 49 Mazurka in C-sharp Minor, op. 30, no. 4 Scherzo No. 2 in B-flat Minor/D-flat Major, op. 31 Frédéric Chopin b. March, 1, 1810, Warsaw, Poland d. October 17, 1849, Paris, France Paderewski, among other things in his rich life, produced one of the most significant, respected, and comprehensive editions of Chopin’s works, and his intuitive and convincing decisions deciphering some of the musicological problems of Chopin’s text have influenced my interpretations of the three works I will share on this program. The C-sharp-Minor Mazurka has always been among the most seductive of the mazurkas for me, and my choice to juxtapose the Fantasy op. 49 and Scherzo op. 39 comes from the fact that these are Chopin’s two major works that suffer from the same identity crisis: are they in the minor keys they begin in, or are they major keys which they end in? Both minor-beginning works find elevation, triumph, and transformation in their relative major key. I’m not convinced these two miraculous creations really want to be pinned down as being clearly major or minor; Chopin’s emotional, psychological states are sneaky, to say the least… 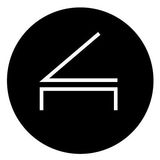