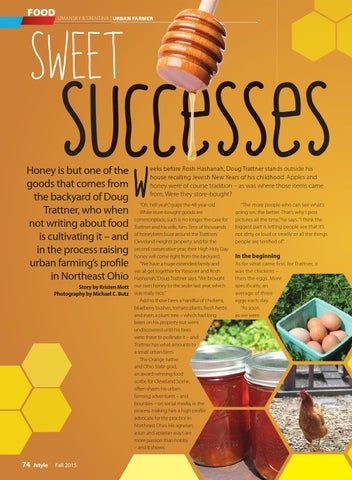 Honey is but one of the goods that comes from the backyard of Doug Trattner, who when not writing about food is cultivating it – and in the process raising urban farming’s profile in Northeast Ohio

eeks before Rosh Hashanah, Doug Trattner stands outside his house recalling Jewish New Years of his childhood. Apples and honey were of course tradition – as was where those items came from. Were they store-bought?

“Oh, hell yeah,” quips the 48-year-old. While store-bought goods are commonplace, such is no longer the case for Trattner and his wife, Kim. Tens of thousands of honeybees buzz around the Trattners’ Cleveland Heights property, and for the second consecutive year, their High Holy Day honey will come right from the backyard. “We have a huge extended family and we all get together for Passover and Rosh Hashanah,” Doug Trattner says. “We brought Story by Kristen Mott our own honey to the seder last year, which Photography by Michael C. Butz was really nice.” Add to those bees a handful of chickens, blueberry bushes, tomato plants, fresh herbs and even a plum tree – which had long been on his property but went undiscovered until his bees were there to pollinate it – and Trattner has what amounts to a small urban farm. The Orange native and Ohio State grad, an award-winning food scribe for Cleveland Scene, often shares his urban farming adventures – and bounties – on social media, in the process making him a high-profile advocate for the practice in Northeast Ohio. His agrarian, avian and apiarian ways are more passion than hobby – and it shows.

“The more people who can see what’s going on, the better. That’s why I post pictures all the time,” he says. “I think the biggest part is letting people see that it’s not dirty or loud or smelly or all the things people are terrified of.”

In the beginning As for what came first, for Trattner, it was the chickens – then the eggs. More specifically, an average of three eggs each day. “As soon as we were 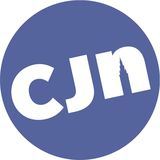 The latest issue of Jstyle. Fashion, fun and entertainment featuring A Girl's Night Out.

The latest issue of Jstyle. Fashion, fun and entertainment featuring A Girl's Night Out.