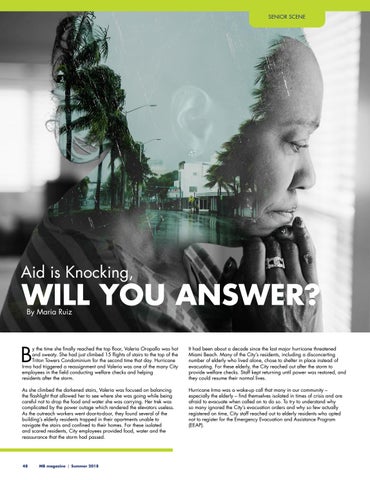 WILL YOU ANSWER? By Maria Ruiz

y the time she finally reached the top floor, Valeria Oropallo was hot and sweaty. She had just climbed 15 flights of stairs to the top of the Triton Towers Condominium for the second time that day. Hurricane Irma had triggered a reassignment and Valeria was one of the many City employees in the field conducting welfare checks and helping residents after the storm.

It had been about a decade since the last major hurricane threatened Miami Beach. Many of the City’s residents, including a disconcerting number of elderly who lived alone, chose to shelter in place instead of evacuating. For these elderly, the City reached out after the storm to provide welfare checks. Staff kept returning until power was restored, and they could resume their normal lives.

As she climbed the darkened stairs, Valeria was focused on balancing the flashlight that allowed her to see where she was going while being careful not to drop the food and water she was carrying. Her trek was complicated by the power outage which rendered the elevators useless. As the outreach workers went door-to-door, they found several of the building’s elderly residents trapped in their apartments unable to navigate the stairs and confined to their homes. For these isolated and scared residents, City employees provided food, water and the reassurance that the storm had passed.

Hurricane Irma was a wake-up call that many in our community – especially the elderly – find themselves isolated in times of crisis and are afraid to evacuate when called on to do so. To try to understand why so many ignored the City’s evacuation orders and why so few actually registered on time, City staff reached out to elderly residents who opted not to register for the Emergency Evacuation and Assistance Program (EEAP).

Check out the Summer issue of MB Mag! Experience Muscle Beach and all its possibilities, talk a walk with the nation's leading planning and environmental experts, get the "low down" on crime and most importantly step into the age-old conversation of investing in the future.