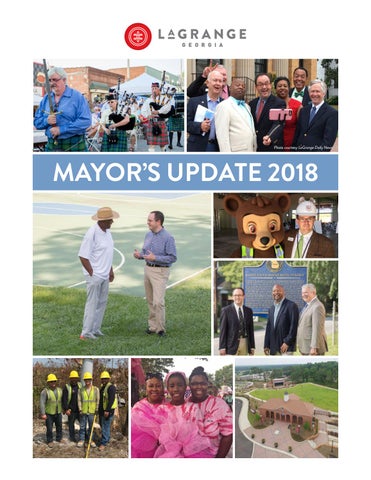 MESSAGE FROM THE MAYOR

It’s great to be a resident of LaGrange in 2018. The past few years in our city have witnessed significant progress, with new business openings and expansions, improved public safety statistics, and more quality of life amenities and activities for our residents. I expect the coming year will continue these positive trends. Growth and progress are happening throughout the city and the surrounding region, and all our residents will benefit. We continue to work closely with the leadership of the county, neighboring cities, and local institutions to solve problems while advancing our overall goal of improving our community. Knowing that growth will bring challenges, we have chosen to welcome the growth and to address the challenges that may arise. I remain very bullish on LaGrange and believe that our best days are ahead of us. We have great citizens, a great city staff, and an engaged city council. I appreciate the people of LaGrange who have allowed me to continue serving as their mayor. Mayor Jim Thornton and his wife, Corinne, walking their dogs Pearlie, Daphne, and Julep

BEAUTIFICATION GATE WAY CORRIDORS Lafayette Parkway, Hamilton Road, and Whitesville Street are the major corridors into the city from Interstate 85. These three corridors, along with Greenville Street, were the subject of a Gateway Corridor Plan, commissioned by the Mayor and City Council, that created a vision for improved aesthetics and transportation enhancements as you travel from the interstate into LaGrange’s core.

H O U SING PRIORITIES The City of LaGrange – along with Troup County and the cities of Hogansville and West Point – was accepted into the Georgia Initiative for Community Housing, a program of the Department of Community Affairs in collaboration with the University of Georgia, the Georgia Municipal Association, and Georgia Power. A community housing team with members from the four jurisdictions was assembled and is now working with the group to prioritize housing issues and begin drafting a comprehensive plan.

Whitesville Street, Lukken to the bridge

RECREATION Th e Th re a d The Thread is a trail network consisting of 29 miles of multi-use trail connecting key destinations – downtown, neighborhoods, parks, the college, and the hospital. The goal of The Thread is to enhance the health and overall quality of life for LaGrange citizens and visitors.

The next leg of The Thread will connect Twin Cedars through Calumet Park to the new park and skate plaza in the southern part of downtown by Wild Leap Brewery.

The third segment will connect the Granger LAGRANGE COLLEGE Thread to LaGrange College. HILLSThe &amp; DALES groundbreakESTATE ing is expected in Spring 2018. This segment will be roughly one mile and will pick up at the trailhead and follow North Greenwood to Broad Street to Panther Way and terminate at Vernon Street. Completion is expected by fall 2018.

The Granger Park “model mile” grand opening was July 2017. The 1.2 mile-long segment begins behind St. Mark’s Episcopal Church and weaves through GRANGER PARK Granger Park near LaGrange High School. Phase two of The Thread is currently under construction in the Eastside Park area. The 2.1mile segment will begin at Twin Cedars and go to the Mike Daniel Recreation Center. Completion is slated for spring 2018.

The City is working with Stantec Consulting, former professional skateboarder Kanten Russell, and the skateboarding community to develop a 15,000 square foot skate plaza on a 0.75-acre space just south of Wild Leap Brewery. This plaza will provide an area for wheel-friendly activity that is flexible for use as a gathering space in the southern end of downtown. Construction is expected to begin in spring 2018.

UPCOMING SPLOST V PROJECTS E as t s i d e Pa rk Ma s ter Pl a n City staff is currently working with a consultant to create a plan for improving Eastside Park and the area around the second segment of The Thread. Similar improvements were made at Granger Park surrounding the first segment of the trail. Additional improvements will be made around Dix Street and Revis Street.

SPLOST V, recently passed by 71 percent of voters, will fund a number of projects in the coming years, including improvements to parks, stormwater management, public safety, and transportation infrastructure.

A dog park planned in the southern part of the downtown area will provide an area designated for dogs to exercise and play offleash in a controlled environment under the supervision of owners. This park will promote public health and safety while also providing an outlet for dog owners to socialize.

In 2018, Granger Park will see some renovations to the playground area. The City plans to replace the older playground equipment with updated facilities and create more playground opportunities for children five years and younger. 6 CITY OF LAGRANGE

B ike Pl ayground Bike playground plans include a small-scale, closed course streetscape, complete with realistic lane markings and signage that can teach cyclists of all ages rules about bicycle, pedestrian, and traffic safety in a safe, comfortable setting.

The LaGrange Police Department plans to use SPLOST V funds to complete a major renovation to better utilize space. The old jail facility currently used for storage will be converted into a space for community outreach. It will also allow for the expansion for the special investigations unit, eight detective work stations, more interview rooms, a new video monitoring room, a large new garage to house the crime scene vehicle, emergency services unit, negotiator vehicle, and command post. The exterior of LPD will receive a facelift, too.

SPLOST V will provide $6 million in resurfacing and reconstruction of city streets.

AN APOLOGY In January 2017, Chief Dekmar, Mayor Jim Thornton, LaGrange College President Dan McAlexander, along with community and faith members apologized for the department’s involvement in the 1940 lynching death of Austin Callaway, an African-American teenager. After the teen’s death, officials did not investigate or attempt to find Callaway’s killer.

Chief Lou Dekmar was sworn in as the president of the International Association of Chiefs of Police, or IACP, in October 2017. IACP is the world’s largest law enforcement leadership organization. Chief Dekmar’s initiatives for the organization include continuing the One Mind Campaign, focusing on protecting at-risk adults, and creating a new trust building initiative.

The Anti-Defamation League hosted its 23rd annual “In Concert Against Hate” at the JFK Center in Washington, D.C. The ADL honored LaGrange and Chief Dekmar for the commitment to building bridges for racial reconciliation.

L ag range Poli ce Departm en t The LaGrange Police Department is dedicated to fairness, compassion and excellence; providing police services in accordance with the law, while being sensitive to the needs of the public we serve. We are committed to community partnerships through which we can address crime and public safety concerns. PART I CRIME

CALEA Accre ditation LPD received international accreditation from the Commission on Accreditation for Law Enforcement, or CALEA, for a seventh time. The department also earned the accreditation with excellence award. There are 18,000 law enforcement agencies across the country and fewer than 1,000 earn accreditation. Of those agencies, only 10 percent are cited as excellent.

3K The need for a fire station to cover a portion of northwest LaGrange was identified in 2016 and personnel were added in the 2017-2018 budget. A location off of Vernon Road was identified and work is under way to acquire the parcel. A local architect has been retained to assist with the design of the station to ensure that it fits into the character of the area. SPLOST funding will be used to construct the new station.

A P lace to Practice

The Fire Department addressed a need to replace a 2001 burn building (training facility) that is beginning to lose its structural integrity. Live fire training is essential to the health and safety of our department and our community. You never know how a firefighter will react inside a burning building. The smoke and fumes generated by modern building materials can disorient even the most experienced firefighters. Training in a safe and controlled live fire environment is essential for the safety of our firefighters. Funding for the burn building will be paid for with earmarked public safety SPLOST money. The facility will be located adjacent to the utility building on Lukken Industrial Drive. The project will go out to bid early in 2018. MAYORâ&amp;#x20AC;&amp;#x2122;S UPDATE 2018 9

Tom Hall Parkway begins at the intersection of Whitesville Road and continues northeast to the intersection at D OA SR Hamilton Road. VI A D S. The roadway will provide access to Great Wolf Lodge and future commercial development. On Y WA October 11, 2016 RK the Mayor and Council voted to commemorate the work of the late City Manager Tom Hall by naming the road for him. Completion is expected in summer 2018. PE GA SU S

B u ll S t re e t Re-Alignment

An awkward intersection in the southern part of downtown by Main and Byron Hurst Streets has been reconfigured. Bull Street now continues southwest to connect with Pierce Street and veer east to connect with Main Street near the railroad tracks. This project was completed in winter 2017.

Greenville Street Bri dge Construction is expected to begin on the Greenville Street Bridge in April 2018. Traffic was closed from Greenville Street between North Barnard and Ragland Street due to deteriorating conditions. The bridge crosses over the CSX railroad along a GDOT state highway. The city has been working with GDOT and CSX for two years to plan this project. Once completed, the city will be responsible for the maintenance of the bridge. The project will take a year to complete.

ANNOUNCED MORE THAN $1 BILLION OF INVESTMENT SINCE 2016

Great Wolf Lodge will provide 600 jobs when it opens on May 31, 2018. This first-class destination resort will provide nearly 500,000 square feet of entertainment offerings including a three-story ropes course and rock wall, bowling alley, arcade, miniature golf, several restaurants and a 93,000 square-foot indoor water park. A city-owned conference center will be built on site and operated by Great Wolf Lodge. Total investment into the community is $170 million.

Note: this table does not reflect all small business activity in LaGrange

LaGrange Mall is seeing a surge of growth with the opening of Dunham’s Sports in August 2017 and Hobby Lobby in January 2018. The mall is in negotiations with other retailers and hopes to make more announcemnts about leasing developments soon.

Jindal Films is moving forward with plans to relocate its U.S. research and development center and national headquarters to its existing LaGrange facility. This $205 million move will create 240 new jobs.

Du rac e l l Duracell created 50 new jobs after announcing that all production of AA and AAA batteries will be moved from Lancaster, S.C., to LaGrange. Duracell’s investment is $95 million. The expansion began in early 2017 with a topping-off celebration in August 2017.

Cate rpi ll ar In June 2017, Caterpillar broke ground on a 200,000 square-foot facility on S.L. White Boulevard in LaGrange to serve as the inbound logistics facility for its Global Forestry Division.

Sentury Tire Sentury Tire, a China-based tire manufacturer, is bringing more than 1,000 jobs in production, sales, marketing, warehousing, and distribution in 2018. The factory will cost $530 million and is expected to make 12 million passenger and light truck tires per year.

Inter face Interface broke ground on the first phase of its plant expansion in December 2017. Interface will invest $55 million in its local operations, which is estimated to provide Interface with an annualized cost savings of $30 million through improved efficiencies and material utilization. MAYOR’S UPDATE 2018 11

WHAT DOES IT COST? HOW DO WE PAY FOR IT? The City’s operational and financial performance is very strong. Since 1998, municipal operations have been financed largely by sales tax and utility revenues. This allows the City to operate entirely without property taxes. Businesses and homeowners in LaGrange enjoy a lower tax burden and higher level of service than other comparable communities throughout the Southeastern United States. The City has historically offered utility rates that are very competitive when compared to other area suppliers. Tax exempt financing and efficient operations help us maintain low rates for our customers.