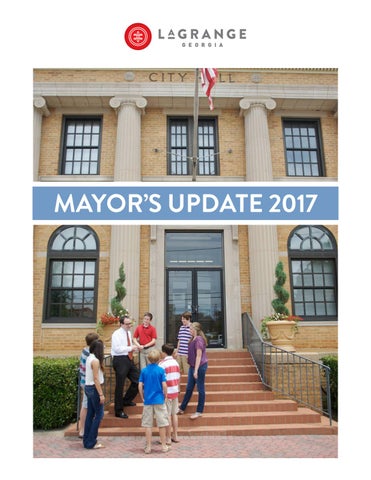 MESSAGE FROM THE MAYOR

appreciate the opportunity to update the citizens of LaGrange about the wonderful things happening in our city. Last year was a busy one, and 2017 promises even more activity and progress. LaGrange is a growing, dynamic, prosperous community, and the future of our city is very bright. The leadership in LaGrange is united around a vision of growth and economic development that guides all of our decision making. This vision was not created in a vacuum but rather with input and direction from our local residents. Driven by this vision, numerous projects and initiatives are underway that will further enhance the vibrancy of our city for many years to come. I always appreciate citizen interest in new developments and encourage you to share with me your thoughts and concerns. Working together, around a collective vision of growth and prosperity, we have the opportunity to significantly improve our community and the quality of life of all citizens. I believe this is our time to excel and live inspired.

G ateway Corridor Lafayette Parkway, Hamilton Road, and Whitesville Street are the City of LaGrange’s major corridors into town and create key connections to Interstate 85. The Mayor and Council commissioned a study to analyze the existing conditions and develop a vision plan. The motivation for the project is to enhance the aesthetics of the gateways into LaGrange’s core and to strategically organize growth of the city for the future.

N e ighb or ho o d Pa r k Rev ita li zation The City is committed to improving LaGrange’s existing park infrastructure and has been working in close coordination with Troup County’s new Parks and Recreation Director, Cajen Rhodes. Improvements are currently underway in Eastside Park that include upgrading fields and lighting; rehabilitating the concession stand; and making preparations for the Thread to move through the park.

The Thread is a trail network consisting of 29 , GA LaGRANGE miles of multi-use trail connecting key destinations – downtown, neighborhoods, parks, the college and the hospital. The goal of the Thread is to enhance the health and overall quality of life for the citizens and visitors to LaGrange. The group guiding adoption and implementation plans to begin construction of the first trail segment in early 2017. The Model Mile, known as the Granger Park Thread, is projected to begin in March.

STREET IMPROVEMENTS H a milto n Roa d Wi d ening Over the next several years, Georgia Department of Transportation plans to add three lanes to Hamilton Road from its intersection at Morgan Street to Auburn Avenue near Lukken Industrial Drive. The project has been in the making for 26 years and construction will begin after the acquisition of the properties, which could take up to two years.

Broad Street Roun dabou t The convergence of Broad, Country Club Drive, Waverly Way, and Panther Way create an opportunity for traffic improvements with the construction of a roundabout. Roundabouts function to eliminate crossing conflicts and improve traffic safety. The Mayor and Council approved this project in 2016 and construction will commence in the spring of 2017. CO UN

Tom H a ll Pa r kway Tom Hall Parkway begins at the intersection of Whitesville Road and continues northeast to the intersection at Hamilton Road. The roadway will provide access to the Great Wolf Lodge and future commercial development. Construction of the parkway began in July and is expected to be completed by the summer of 2017. On October 11, 2016, the Mayor and Council voted to commemorate the work of the late City Manager Tom Hall by naming the road Tom Hall Parkway.

I ndustrial Expan si on s

A first-class destination resort, providing families with nearly 500,000 square feet of entertainment offerings and lodging amenities to enjoy, all under one roof. The centerpiece of the resort will be more than 93,000 square feet of indoor water park fun. It will create more than 600 jobs and represents an investment of approximately $170 million. In addition, a city owned conference center will be built on site and be operated by Great Wolf Lodge.

L aG ra nge Ma ll LaGrange Mall just announced the future opening of Hobby Lobby and Dunham’s Sports in the former J.C. Penney’s box. The mall will expand its current footprint to accommodate the two large stores. Stores are slated to open in September of 2017. The Mall is in negotiations with other retailers and restaurants and hopes to be able to announce additional growth later this year.

Duracell announced the production of AA and AAA batteries will be moved from Lancaster, S.C., to LaGrange. This will create 50 new jobs here, and brings roughly $95 million dollars of investment. LaGrange was chosen to be the site of the consolidated U.S. operations because of its future land expansion potential, strategic transportation positioning and adjacency to the recently expanded Duracell LaGrange Business Center. Jindal Films develops and manufactures specialty films. In 2016, the company announced plans to relocate its U.S. research and development center and national headquarters to their LaGrange facility. Investing $180 million, the relocation will create 240 new jobs.

Nesper manufactures stamped metal products used for switches and relays. In 2016, they announced a 10,000-square-foot expansion. This will create an investment of $1 million with the expectation of creating 12 jobs. MAYOR’S UPDATE 2017 5

DOWNTOWN DEVELOPMENT Wil d L e a p Br ewer y Wild Leap Brew Company announced plans to open a craft brewery in the former Westbrook Tire building in the south part of downtown. Construction is underway and renovations are scheduled to be completed by the summer of 2017. This project will bring tourists to the downtown area and complement the amphitheater and downtown hotel.

Cou r t ya r d by Ma r r iot t &amp; Pa r king Deck A 90-room hotel with various amenities including a pool, fitness room, bar and restaurant is currently under construction in downtown LaGrange. It is an $11 million dollar investment in downtown LaGrange and will create 30 new jobs. A 200-space parking deck will be constructed adjacent to the hotel. The deck will be owned by the city, but is being financed with a $4 million grant from the Callaway Foundation.

The 14,100-square-foot office building houses 54 employees and serves as the regional headquarters for the state Department of Public Health. Call centers, emergency operations and a host of other services are offered at the building, where employees coordinate and oversee health departments in the 12-county District 4. The building and land are owned by the Downtown LaGrange Development Authority, and the state has signed a 20-year lease. The construction cost was roughly $3.6 million.

Sweetl a n d Opened in spring 2016, the 2,500 seat Sweetland Amphitheatre at Boyd ParkÂ provides an intimate outdoor venue for starstudded performances and community events, all within walking distance of restaurants and shops and near local hotels and attractions. The Sweetland Amphitheatre cost about $8 million and was funded through a publicprivate partnership. The inaugural summer concert series held a lineup of artists that included Willie Nelson, the Temptations, the Charlie Daniels Band, and Need to Breathe. Numerous other activities including free public events were held throughout the year that included First Fridays, Youth Councilâ&amp;#x20AC;&amp;#x2122;s Summer Bash, United Way Chili Cookoff, and Battle of the Bands. 6 CITY OF LAGRANGE

PUBLIC SAFETY F i re D e pa r tment The Fire 5000 Department has FIRE ACTIVITY 2005-2016 been working 4000 towards becoming INCIDENTS* accredited with 3000 the Center for INSPECTIONS Public Safety Excellence for 2000 the last five years. COMMUNITY OUTREACH This process 1000 will make the PRE-FIRE PLANS department better and more 0 2006 2008 2010 2012 2014 2016 efficient for our *includes medical and fire calls community. The Fire Department has distinguished itself as one of the elite departments with an ISO rating of 2 and accreditation will further our advancement as one of the top departments in the state and the nation. Statistics show that roughly 220 of 29,980 fire agencies are accredited in the United States.

P olice D e par tment The LaGrange Police Department is committed to fairness, compassion and excellence; providing police services in accordance with the law, while being sensitive to the needs of the public we serve. We are committed to community partnerships through which we can address crime and public safety concerns. The LaGrange Police Department received international accreditation from the Commission on Accreditation for Law Enforcement Agencies in July 1999, and received its fifth consecutive reaccreditation award in 2014. The agency also participates in the Georgia State Certification Program through the Georgia Association of Chiefs of Police. The department received State Certification in 1998 and continues to participate in this voluntary process.

HOW DO WE PAY FOR IT? The City’s operational and financial performance is very strong. Since 1998, Municipal operations have been financed largely by sales tax and utility revenues. This allows the City to operate entirely without property taxes. Businesses and homeowners in LaGrange enjoy a lower tax burden and higher level of service than other comparable communities throughout the Southeastern United States. The City has historically offered utility rates that are very competitive when compared to other area suppliers. Tax exempt financing and efficient operations help us maintain low rates for our customers.

The Mayor of the City of LaGrange holds a series of meetings in January and February around the city to hear from residents on issues of concern to update on projects and priorities for the city. This update was prepared and given out at the Mayor's Town Hall Meetings.