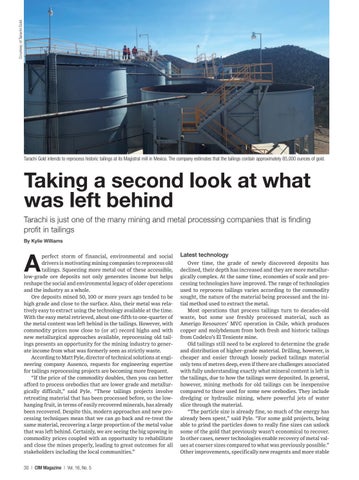 Tarachi Gold intends to reprocess historic tailings at its Magistral mill in Mexico. The company estimates that the tailings contain approximately 85,000 ounces of gold.

perfect storm of financial, environmental and social drivers is motivating mining companies to reprocess old tailings. Squeezing more metal out of these accessible, low-grade ore deposits not only generates income but helps reshape the social and environmental legacy of older operations and the industry as a whole. Ore deposits mined 50, 100 or more years ago tended to be high grade and close to the surface. Also, their metal was relatively easy to extract using the technology available at the time. With the easy metal retrieved, about one-fifth to one-quarter of the metal content was left behind in the tailings. However, with commodity prices now close to (or at) record highs and with new metallurgical approaches available, reprocessing old tailings presents an opportunity for the mining industry to generate income from what was formerly seen as strictly waste. According to Matt Pyle, director of technical solutions at engineering company Ausenco, requests for engineering expertise for tailings reprocessing projects are becoming more frequent. “If the price of the commodity doubles, then you can better afford to process orebodies that are lower grade and metallurgically difficult,” said Pyle. “These tailings projects involve retreating material that has been processed before, so the lowhanging fruit, in terms of easily recovered minerals, has already been recovered. Despite this, modern approaches and new processing techniques mean that we can go back and re-treat the same material, recovering a large proportion of the metal value that was left behind. Certainly, we are seeing the big upswing in commodity prices coupled with an opportunity to rehabilitate and close the mines properly, leading to great outcomes for all stakeholders including the local communities.” 30 | CIM Magazine | Vol. 16, No. 5

Latest technology Over time, the grade of newly discovered deposits has declined, their depth has increased and they are more metallurgically complex. At the same time, economies of scale and processing technologies have improved. The range of technologies used to reprocess tailings varies according to the commodity sought, the nature of the material being processed and the initial method used to extract the metal. Most operations that process tailings turn to decades-old waste, but some use freshly processed material, such as Amerigo Resources’ MVC operation in Chile, which produces copper and molybdenum from both fresh and historic tailings from Codelco’s El Teniente mine. Old tailings still need to be explored to determine the grade and distribution of higher-grade material. Drilling, however, is cheaper and easier through loosely packed tailings material only tens of metres deep, even if there are challenges associated with fully understanding exactly what mineral content is left in the tailings, due to how the tailings were deposited. In general, however, mining methods for old tailings can be inexpensive compared to those used for some new orebodies. They include dredging or hydraulic mining, where powerful jets of water slice through the material. “The particle size is already fine, so much of the energy has already been spent,” said Pyle. “For some gold projects, being able to grind the particles down to really fine sizes can unlock some of the gold that previously wasn’t economical to recover. In other cases, newer technologies enable recovery of metal values at coarser sizes compared to what was previously possible.” Other improvements, specifically new reagents and more stable 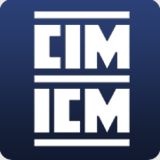