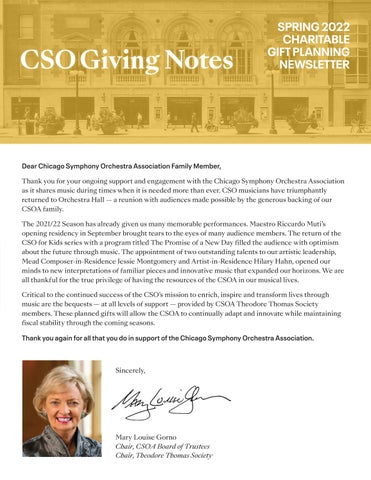 Dear Chicago Symphony Orchestra Association Family Member, Thank you for your ongoing support and engagement with the Chicago Symphony Orchestra Association as it shares music during times when it is needed more than ever. CSO musicians have triumphantly returned to Orchestra Hall — a reunion with audiences made possible by the generous backing of our CSOA family. The 2021/22 Season has already given us many memorable performances. Maestro Riccardo Muti’s opening residency in September brought tears to the eyes of many audience members. The return of the CSO for Kids series with a program titled The Promise of a New Day filled the audience with optimism about the future through music. The appointment of two outstanding talents to our artistic leadership, Mead Composer-in-Residence Jessie Montgomery and Artist-in-Residence Hilary Hahn, opened our minds to new interpretations of familiar pieces and innovative music that expanded our horizons. We are all thankful for the true privilege of having the resources of the CSOA in our musical lives. Critical to the continued success of the CSO’s mission to enrich, inspire and transform lives through music are the bequests — at all levels of support — provided by CSOA Theodore Thomas Society members. These planned gifts will allow the CSOA to continually adapt and innovate while maintaining fiscal stability through the coming seasons.

Thank you again for all that you do in support of the Chicago Symphony Orchestra Association.

Named in honor of the founding music director of the Chicago Symphony Orchestra, the Theodore Thomas Society recognizes those who make financial plans — in any amount — to benefit the CSO in the future.

To thank you for your commitment, you receive benefits as a Society member:

Invitation for two to the CSOA’s Annual Meeting

For information on including the CSO in your will, trust or retirement plans, or details about the Theodore Thomas Society, contact the CSOA’s planned giving team at 312-294-3100 or plannedgiving@cso.org or visit cso.org/PlannedGiving.

from my estate to the Chicago Symphony Orchestra, an Illinois not-for-profit corporation, Chicago, Illinois, for its general purposes.”

  For a percentage-based remainder bequest: “I hereby give and bequeath all (or

%) of the rest, residue and remainder of my estate to the Chicago Symphony Orchestra, an Illinois not-for-profit corporation, Chicago, Illinois, for its general purposes.”

the financial institution that holds your IRA). OR write a check payable to the CSO from your IRA checkbook.

◆  The gift can count toward your required annual minimum distribution and not as income for tax purposes. ◆  You may distribute a total amount up to $100,000 in a calendar year to the CSO and other charities, completed by December 31 of the year in which you intend to make the charitable distribution.

You can also support the future of the CSO through your IRA by naming the Orchestra as a beneficiary of the account for distribution after your lifetime. This allows the advantage of additional tax savings. Contact your IRA administrator to learn more or visit cso.org/IRA.

Did you know? Less than a month after its inaugural concerts, the Chicago Orchestra (as it was then known) was in the pit at the Auditorium Theatre for performances by the touring Metropolitan Opera Company from November 9 until December 12, 1891. Conducting duties were shared by Auguste Vianesi and Louis Saar, the Orchestra’s first guest conductors.

Wagner’s Lohengrin (sung in Italian) was the first opera presented in collaboration with the Chicago Orchestra and the Metropolitan Opera on November 9, 1891.

The singers who appeared were among the most famous of the day, including Emma Eames, Lilli Lehmann, Marie Van Zandt, Sofia Scalchi, Jean Martapoura, Edouard de Reszke and Jules Vinche. A staggering number of operas were performed, including Aida, Cavalleria rusticana, Don Giovanni, Faust, La sonnambula, Les Huguenots, Lohengrin, Martha, Mignon, Norma, Orpheus and Eurydice, Rigoletto and Romeo and Juliet. The residency also included the Metropolitan’s first performance of Verdi’s Otello with a cast that included Jean de Reszke in the title role, Emma Albani as Desdemona and Edoardo Camera as Iago.

Tom Hall Can you share a little bit about your musical journey before joining the CSO, as a member of the CSO and post-CSO? I received all of my formal

musical training in my hometown of Tallahassee, Florida. After earning two degrees in music at Florida State University, I served as a member of The United States Army Strings, performing at the White House during the Johnson and Nixon administrations. Following a season with the Cincinnati Symphony Orchestra, I joined the CSO in 1970 as one of the first musicians hired by new music director Georg Solti, playing in the second violin section. I successfully auditioned for a fixed position near the front of that section in 1974 and held that post until my retirement in 2006. I served for the next 11 years as president of the CSO Alumni Association. Although I no longer perform, I continue to play the violin for my own enjoyment.

What inspires your love of music? Music has been an important part of my life since I was very young.

My parents played classical music and musical theater music on the phonograph, and I attended operas, concerts and recitals at Florida State. I still remember hearing Fritz Kreisler when I was 4 years old. The magical sounds he and others made touched me deeply and stoked my desire to play the violin and pursue a career in music.

Why do you feel it’s important to support the CSO as a member of the Theodore Thomas Society? How fortunate I am to have been a member of the CSO! One way to express my thankfulness for this good fortune is to give something back to the organization to which I belonged for 36 wonderful years.

Glen Madeja and Janet Steidl What inspires your love of music? Glen: Heart and humanity.

I grew up when AM radio was exploding with new and rapidly evolving music. I could experience new worlds just by hearing all these different songs. I still love hearing a piece of classical music that can take me somewhere. Janet: And I grew up listening to WFMT because of my parents’ love of music. I started playing the oboe at 7 and went on to earn my music degree from Northwestern University. After graduating, I realized being a professional musician was not within my grasp, but music remains my love.

S O C I E T Y (Glen Madeja and Janet Steidl continued) What initially drew you to the CSO? Janet: Being a young musician in Chicagoland, it was hard to avoid!

Glen: I really wasn’t familiar with classical music until college. I went to a number of (free) concerts at school, but never thought of seeing a performance by the CSO — I figured that was “beyond” me. After I married my classically trained musician wife, she helped me understand that I actually did appreciate classical music as much as the next guy.

Why do you feel it’s important to support the CSOA as a member of the Theodore Thomas Society? Janet: I resonate with the young musicians of the Civic Orchestra. I shared their dreams and

their goals once upon a time, and I continue to share their love of music. I feel grateful to be in a position to help them along their way. Glen: I have always been an advocate of young people pursuing their passions and/or life goals. They are our future. Almost all of us were initially given an opportunity by an older person who believed in us, and the rest was up to you. It’s just continuing a time-immemorial cycle.

Don Roberts What inspires your love of music? My mother was a piano teacher who gave lessons in our home, so music has been a part of my life from an early age. In the fifth grade, I started playing bassoon, which led to wonderful musical experiences at Interlochen, the Curtis Institute of Music and in various ensembles. Throughout my career as a music librarian, professor of music and ethnomusicologist, I have had the joy of following and being involved in many aspects of music. Music is essential to my existence.

What initially drew you to the CSO? Other than listening to CSO recordings,

my first direct contact with the Orchestra was when the Chicago Symphony Woodwind Quintet (Ralph Johnson, flute; Robert Mayer, oboe; Jerome Don Roberts Stowell, clarinet; Philip Farkas, horn; Wilbur Simpson, bassoon) performed at my high school in Wichita, Kansas, and I had a lesson with Wilbur Simpson. When I joined the Northwestern University faculty in 1969, the CSO Thursday concerts became the focal point of our lives, and many of the musicians became colleagues and friends. 1969 was an exciting time for the CSO and its followers, as it was the beginning of the Solti era. I fondly recollect attending the CSO’s first European concerts (Edinburgh, 1971) and enjoying the amazement of festival concert attendees that an American orchestra could be that good.

Why do you feel it’s important to support the CSOA as a member of the Theodore Thomas Society? Music and all the arts are fundamental cornerstones of human life. It is extremely important that significant organizations such as the CSO have adequate funding to ensure that their impact will continue to enrich society in the future.

Demonstrate your lifelong passion for music with a planned gift. Your future support — in any amount — of the Chicago Symphony Orchestra can: ◆ Strengthen the Orchestra and musical programs you love. ◆ Create opportunities for new audiences to discover and grow their love of music.

◆ Achieve tax savings and income opportunities for you today and your heirs in the future.

Planned Gifts Support Transformational Experiences NEWS AND PROJECTS from the 2021/22 Season ◆ During Riccardo Muti’s fall residency, it was announced that his term as CSO Zell Music Director has been extended

by one year, through the 2022/23 Season. In total, Maestro Muti will have led the CSO for 13 unforgettable seasons.

◆  In January 2022, the Once Upon a Symphony concert series, which introduces children ages 3-5 to classical music,

returned to Symphony Center! The performances of Maybe Something Beautiful inspired young audience members and their families with a story that illustrates how even the smallest artists can accomplish something big. In some instances, this was attendees’ first experience of live music since March 2020.

◆  On April 9–11, the CSO’s Negaunee Music Institute will host the Chicago Youth in Music Festival in partnership

with the Chicago Musical Pathways Initiative and National Instrumentalist Mentoring and Advancement Network. With a focus on supporting extraordinary musicians from underrepresented backgrounds, the 2022 Festival will bring together students from 10 cities. Participants will experience a weekend of mentorship from Sir Georg Solti Conducting Apprentice Lina Gonzalez-Granados and CSO, Civic Orchestra and Chicago Sinfonietta musicians, culminating in an open rehearsal with Riccardo Muti. 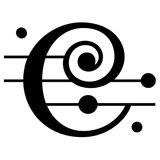