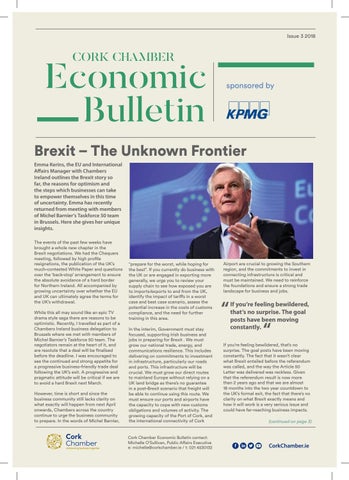 Brexit – The Unknown Frontier Emma Kerins, the EU and International Affairs Manager with Chambers Ireland outlines the Brexit story so far, the reasons for optimism and the steps which businesses can take to empower themselves in this time of uncertainty. Emma has recently returned from meeting with members of Michel Barnier’s Taskforce 50 team in Brussels. Here she gives her unique insights. The events of the past few weeks have brought a whole new chapter in the Brexit negotiations. We had the Chequers meeting, followed by high profile resignations, the publication of the UK’s much-contested White Paper and questions over the ‘back-stop’ arrangement to ensure the absolute avoidance of a hard border for Northern Ireland. All accompanied by growing uncertainty over whether the EU and UK can ultimately agree the terms for the UK’s withdrawal. While this all may sound like an epic TV drama style saga there are reasons to be optimistic. Recently, I travelled as part of a Chambers Ireland business delegation to Brussels where we met with members of Michel Barnier’s Taskforce 50 team. The negotiators remain at the heart of it, and are resolute that a deal will be finalised before the deadline. I was encouraged to see the continued and strong appetite for a progressive business-friendly trade deal following the UK’s exit. A progressive and pragmatic attitude will be critical if we are to avoid a hard Brexit next March. However, time is short and since the business community still lacks clarity on what exactly will happen from next April onwards, Chambers across the country continue to urge the business community to prepare. In the words of Michel Barnier,

“prepare for the worst, while hoping for the best”. If you currently do business with the UK or are engaged in exporting more generally, we urge you to review your supply chain to see how exposed you are to imports/exports to and from the UK, identify the impact of tariffs in a worst case and best case scenario, assess the potential increase in the costs of customs compliance, and the need for further training in this area. In the interim, Government must stay focused, supporting Irish business and jobs in preparing for Brexit . We must grow our national trade, energy, and communications resilience. This includes delivering on commitments to investment in infrastructure, particularly our roads and ports. This infrastructure will be crucial. We must grow our direct routes to mainland Europe without relying on a UK land bridge as there’s no guarantee in a post-Brexit scenario that freight will be able to continue using this route. We must ensure our ports and airports have the capacity to cope with new customs obligations and volumes of activity. The growing capacity of the Port of Cork, and the international connectivity of Cork

Airport are crucial to growing the Southern region, and the commitments to invest in connecting infrastructure is critical and must be maintained. We need to reinforce the foundations and ensure a strong trade landscape for business and jobs.

If you’re feeling bewildered, that’s no surprise. The goal posts have been moving constantly.

If you’re feeling bewildered, that’s no surprise. The goal posts have been moving constantly. The fact that it wasn’t clear what Brexit entailed before the referendum was called, and the way the Article 50 Letter was delivered was reckless. Given that the referendum result is now more than 2 years ago and that we are almost 18 months into the two year countdown to the UK’s formal exit, the fact that there’s no clarity on what Brexit exactly means and how it will work is a very serious issue and could have far-reaching business impacts. (continued on page 3)

Executive Summary The second economic trends survey of 2018 shows the experience of Cork Chamber members during April, May and June. Business confidence has ticked back up to 95% from 91% in Quarter 1, now matching the exceptional high of Q4 2017 showing great consistency of appraisal and outlook. There is also a steadiness to the reporting of confidence in the Irish economy as a whole, with 88% saying their confidence was the same or better than in Q1 2018. Given the persistence of Brexit deadlock, the UK internal political tumult and pursuit of cherry picking options consistently refuted by the EU, the findings speak to the internationally diverse and outward looking economy in Cork and the discreet ongoing preparation in affected sectors. There is optimism that business will continue to trade well with the UK during this ongoing phase of negotiation and will find a way in any potential scenario thereafter. In this issue Emma Kerins, Chambers Ireland International Affairs Manager also gives macro insights from her ongoing engagement with Brussels, government and business.

At this time of year the forthcoming budget is a priority. We asked about your priorities and you said housing, capital investment and tax reform. We asked your thoughts on the general approach and you said tax reform was top, followed by increased public spending and tax cuts. In this respect we again show consistency. We show that the business community in Cork once again cites housing as the priority. Our developers are delivering in every viable facet of the built environment economy, hotels, office and commercial. Housing is beginning to move in areas supported by infrastructural funding. That said, we are still unable to meet demand for urban apartments for rent. If unaddressed, a shortage of rental apartments may cause Irish city regions to lose opportunity for investment both inward and indigenous. Our membership supports incremental reform to tax structures and only calls for exceptional steps in exceptional circumstances. We will publish our budget 2019 submission in the next couple of weeks and we look forward to sharing.

They also represent of a broad range of sectors.

Brexit – The Unknown Frontier What we do know: First, the UK will leave the European Union in March 2019. Second, unless a Withdrawal Agreement is in place which includes agreement on the ‘backstop’ solution for Northern Ireland there will be no period of transition following the UK’s exit. If a transition is not agreed, we’re dealing with a hard border between the EU and UK, which will mean the immediate dissolution of the current trading relationship and the application of World Trade Organisation rules and tariffs. The other thing we know for certain is that if the UK leaves the EU without a deal, Ireland will be the hardest hit of all European countries. This was confirmed in another report, published recently, where the IMF found that the long-term damage of a return to WTO rules could be more than four times worse for Ireland than on countries like the Netherlands, Belgium or Denmark. It is also worth noting that the WTO does not in any way deal with all the issues which will arise, aviation being an example worthy of great concern.

continued... Ultimately it’s about what we can do ourselves too. Ireland and its regions must continue to be competitive and win investment. This means retaining our competitive economic edge. We need to continue to open new connections between Cork and mainland Europe, diversify the markets we trade with and ensure that Cork, and Ireland, continue to be attractive for business. The next few months represents our the opportunity to put in place contingency plans to reduce the impact of a hard Brexit, should that be the outcome next March. The time is now to take those steps, to prepare your business. For questions about Brexit, the negotiations and how business can prepare, please contact emma.kerins@chambers.ie

Expected changes to employee numbers over the next 12 months

Members inform and validate the approach of our budgetary committee as we work towards Budget 2019. Your priorities show a crossover with your top 3 threats in the form of housing. There is validation of the need for increased capital expenditure, and the ongoing evolution of tax reform.

The most difficult vacancies to fill are Experienced Managerial staff and Hospitality staff.

Provision of housing, a key to our national competitiveness comes back into the top 3 in this quarter having been briefly replaced by cost competitiveness as a stand-alone concern in Q1.

ConFidEnCE in ThE iRiSh EConomY

Watch out for the launch of our Budget 2019 submission this August.

We thank members for their valuable input. The work of Cork Chamber is shaped by you and for you, and your participation is key in guiding our focus as we promote and advocate for an ever-thriving Cork region.

Less focus on roads, more focus on public transport and quality of life in urban areas.

focus on and improve the current housing crisis.

more incentives to SMEs… it is the SMEs that are creating more employment.

We have to control our national debt, it’s far too high.

Increased investment in the Arts to support cultural entrepreneurship.

Overall Optimism in KPMG CEO Report The latest CEO Outlook from KPMG highlights CEOs’ general optimism about future business performance. In the context of Ireland as the fastest growing economy in Europe, two thirds of Irish CEOs (68 percent) predict headcount growth of up to 5 percent over the next 3 years. Meanwhile the majority of CEOs in Ireland (72 percent) anticipate top line business growth of up to 2 percent in the year ahead. According to Barrie O’Connell, Partner in Charge of KPMG in Cork, “This general optimism reflects CEOs’ positive outlook, notwithstanding some concerns about wider volatility, ranging from Brexit and potential for protectionism in other markets and the challenge of taking advantage of new technologies.” According to Barrie O’Connell, “Ireland, Cork and the wider Munster region is very well placed as an attractive, stable location for business and our CEO survey reflects that optimism.” In addition to macroeconomic factors, CEOs recognise that most organisations still depend on traditional revenue streams says O’Connell “They know that in many cases revenue sources will inevitably decline and will need to be replaced. CEOs also play

a vital role in driving innovation and growth by challenging the status quo in their businesses, stimulating fresh thinking and promoting innovation.” For Irish CEOs, digital innovation can create significant value across business models, customer experience and operations. Barrie O’Connell notes just how much greater connectivity brings increasing cyber vulnerability “Almost a third of Irish CEOs surveyed say that a cyber attack is now a case of ‘when’, not ‘if’.” Barrie also emphasises the point that successful leadership in the digital era depends on an educated awareness of what they stand to lose and what the prize is for getting it right. “More than three quarters (76%) of Irish CEOs say that they are ready to personally lead their organisations through radical transformation of their operating model. One of their greatest challenges is how to gauge the negative impact if they don’t adopt new technologies, and what is at stake if they get it wrong.” For more information on CEO insights from Ireland and around the world see kpmg.ie

of Irish CEOs believe artificial intelligence will create more jobs than it destroys. 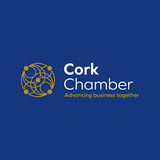 Cork Chamber Economic Bulletin Issue 3, 2018. Every quarter we ask for your views on key opportunities and challenges facing your business t...

Cork Chamber Economic Bulletin Issue 3, 2018. Every quarter we ask for your views on key opportunities and challenges facing your business t...