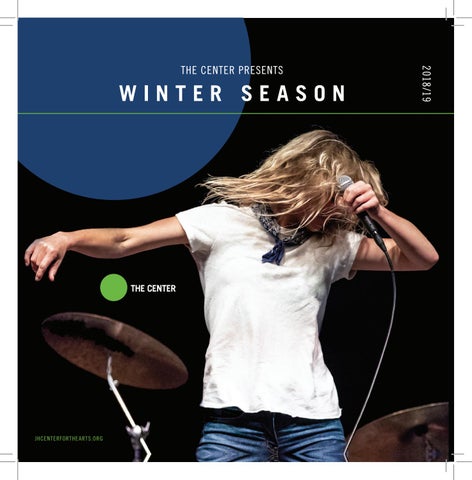 SEASON CALENDAR Explore the enriching variety of programs and events coming this winter to our creative campus.

CENTER PRESENTS Discover the extraordinary artists, musicians, and speakers taking the stage this season at The Center Theater.

NATIONAL THEATRE LIVE From Frankenstein to King Lear, experience the best of British Theatre right here at The Center.

CAMPUS EXHIBITIONS See the linup for The Center Theater Gallery and The Center Courtyard.

VISIT JHCENTERFORTHEARTS.ORG OR CALL THE CENTER BOX OFFICE AT 307.733.4900

The Center Box Office is located on campus at 265 South Cache Street in downtown Jackson. It is open for business and customer support Monday through Friday, 12 - 5 PM and two hours prior to ticketed performances.

AN EVENING WITH THE MILK CARTON KIDS

WITH LYLE LOVETT AND JOHN HIATT

Presented by Off Square Theatre Company

Presented by Off Square Theatre Company

SMALL WORKS: A CELEBRATION OF ART

- PERFORMANCE OF “ALL FUNKD UP”

BLIND BOYS OF ALABAMA CHRISTMAS SHOW FEATURING RUTHIE FOSTER THIS HOLIDAY SEASON, THE BLIND BOYS of Alabama are touring in support of their latest Christmas album, Talkin’ Christmas! That album features blues legend Taj Mahal and includes several original holiday songs. This special concert will include songs from the Talkin’ Christmas! album as well as the band’s previous Grammy-winning Christmas recording, “Go Tell It on the Mountain,” along with Blind Boys’ Gospel classics and other gems from a 70-plus-year career. 4

Hailing from the tightly knit musical community of Austin, Texas, awardwinning singer-songwriter RUTHIE FOSTER has found herself duetting with Bonnie Raitt, standing on stage with the Allman Brothers at New York’s Beacon Theater, and trading verses with Susan Tedeschi. Ruthie has been nominated for three Grammys, and has won multiple Blues Music and Austin Music Awards, plus the Grand Prix du Disque from Académie Charles-Cros in France.

AN ACOUSTIC EVENING WITH LYLE LOVETT AND JOHN HIATT A singer, composer and actor, Lyle Lovett has broadened the definition of American music in a career that spans 14 albums. Coupled with his gift for storytelling, the Texas-based musician fuses elements of country, swing, jazz, folk, gospel and blues in a convention-defying manner that breaks down barriers. Whether touring as a ‘Duo’ or with his ‘Acoustic Group’ or his ‘Large Band,’ Lovett’s live performances show not only the breadth of this Texas legend’s deep talents, but also the diversity of his influences, making him one of the most compelling and captivating musicians in popular music. John Hiatt has risen to prominence by converting his personal tragedies into a catalog of recordings for more than four decades. Since the release of his 1974 debut, Hangin’ Around the Observatory rarely has more than a year or two passed without a new Hiatt collection hitting the shelves. Hiatt’s raspy, blues-based singing has been compared with that of Bruce Springsteen, however, Hiatt’s skill as a lyricist is the thread that ties his music together.

JOSHUA RADIN & LISSIE WITH SPECIAL GUEST LILY KERSHAW Love and the complications surrounding it have long proven to be Joshua Radin’s songwriting forte. Though he never intended to be a live performer, there was little choice when the first song he ever wrote, “Winter,” was featured on an episode of “Scrubs.” The resulting fervor around the song soon led to a record deal, and over the last decade, Radin has toured the world countless times, sold hundreds of thousands of records and topped the iTunes charts, and earned raves from Rolling Stone to The Guardian.

Lissie grew up in Rock Island, Illinois, near the Mississippi River, speaking her mind and writing songs from an early age. She will release her fourth studio album Castles on March 23. The new music follows the release of her 2016 album My Wild West, which received widespread critical praise. Written predominantly from Lissie’s new home in Northeast Iowa, Castles represents a spiritual as well as musical development. It’s a portrait of an artist who has always been on the move and is finally creating a sense of permanency—a chance to catch her breath and reflect.

THE 4TH ANNUAL PRESENTATION OF THE MOTH MAINSTAGE The Moth is true stories, told live and without notes. The Moth celebrates the ability of stories to honor both the diversity and commonality of human experience, and to satisfy a vital human need for connection. It seeks to present recognized storytellers among established and emerging writers, performers and artists and to encourage storytelling among communities whose stories often go unheard. The Moth Mainstage is a community where entertainment and enlightenment merge, featuring five tellers who develop and shape their stories with The Mothâ&#x20AC;&#x2122;s directors.

AN EVENING WITH THE MILK CARTON KIDS The Milk Carton Kids’ music is defined by the understated virtuosity of singersongwriters and guitarists Joey Ryan and Kenneth Pattengale. Tight harmonies and shimmering melodies set against intricate, driving guitar are their hallmark, earning them accolades nationwide—including the Duo/Group Of The Year honor at the 2014 Americana Music Awards. “While their songwriting bends toward the atmospheric and poignant, Ryan and Pattengale have unexpectedly sharp senses of humor, which comes through during their onstage banter between songs.” (NPR) The Milk Carton Kids’ All the Things That I Did and All the Things That I Didn’t Do arrives from ANTI- Records on June 29.

AN EVENING WITH LIZ PHAIR Liz Phair is a Grammy-nominated singer songwriter whose debut album, Exile In Guyville, is considered by music critics to be a landmark of indie rock. She has been a recording artist and touring performer for twenty-five years, paving the way for countless music artists, particularly women, who count her among their major influences. Phair has sold over five million records worldwide, with three US gold albums and two Grammy nominations. Her 1993 debut studio album Exile in Guyville was released to international acclaim; it has been ranked by Rolling Stone as one of the 500 Greatest Albums of All Time, by Pitchfork as one of the 100 Greatest albums of the 90â&#x20AC;&#x2122;s and is considered one of the most accomplished debut albums for any artist in any genre to date. To celebrate the 25th Anniversary of Exile in Guyville, Matador Records will be re-issuing the record along with a box-set.

Experience a groundbreaking initiative to broadcast productions from the London stage to screens in cinemas and art centers around the globe. NOV 15 / 7 PM

SEEKING THE LIGHT BY ISABEL RUCKER

Dec 20 - Feb 5 Artist Talk / Dec 20 12-1pm Reception / Dec 21 5:30-7pm Seeking the Light is a collection of recent large-scale watercolor paintings that are vibrant, abstract visions of the light spectrum and remembered places. The beauty of light is illustrated through the faceted lenses of the natural world, gemstones and memory.

Feb 5 - Mar 8 Artist Talk / Feb 14 12-1pm Reception / Feb 15 5:30-7pm Haley’s favorite thing about living in the mountains is that when you look at them, they never quite look the same, even if it is only one tiny difference in a shadow. The same goes for the ocean, and that’s why it’s so mesmerizing to watch waves come and go. From the mountains to the waves, these bold landscapes inspire her series of dramatic images painted using minimal colors, with each piece producing an exciting statement. 12

WHODUNNIT? Mar 15 An exhibition leading up to the March 15 reception, with food, drinks, and your chance to steal an incredible piece of art at a low price. From youth entries to professional artists, all creatives participate in this anonymous art show. Art is unsigned and unlabeled for this much anticipated, one-night event. Presented by Art Association of Jackson Hole. All proceeds benefit art education programs at the Art Association.

The Center Courtyard Oct 11 - April 2019 Patrick Marold’s Windmill Project is a landscape-based installation that directly renders the behavior of wind into a living body of light. Marold has suspended approximately 200 light generating windmills in the open space of the courtyard. These windmills form a gently rising shape that rotates and reflects daylight during the day and casts light during the evening. Photo by Buckrail

The enclosure is a circular composition of timber panels anchored by a custom steel base, which offers both transparent and opaque views depending on one’s position and perspective. Town Enclosure Pavilion is open to performing and visual artists, exhibits, classes, and spontaneous gatherings, free for use by artists and nonprofit organizations offering non-ticketed activities. The project is a collaboration between Jackson Hole Public Art and The Center’s Creative in Residence program.

CENTER SPONSORS The Center presents a wide variety of programs each year for the enjoyment of the Jackson Hole community.

Offering these high-caliber events is possible thanks to Center Sponsors and Friends. We invite you to join these exceptional organizations and donors!

WYOMING HUMANITIES/THINKWY THE CENTER IS A PRIVATE NOT-FOR-PROFIT ORGANIZATION FUNDED LARGELY BY GENEROUS GIFTS FROM OUR PATRONS.

MISSION: TO CONNECT OUR CREATIVE COMMUNITY BY PROVIDING A DEDICATED CAMPUS, SUPPORTING EXCELLENT PROGRAMMING, AND NURTURING A COLLABORATIVE SPIRIT.

Explore the enriching variety of programs and events coming this winter to The Center's creative campus in Jackson, WY.

Explore the enriching variety of programs and events coming this winter to The Center's creative campus in Jackson, WY.